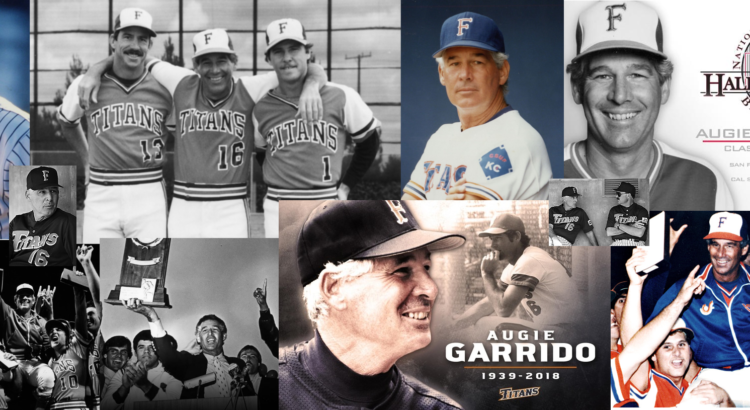 Augie Garrido, the winningest coach in college baseball history with 1,975 victories, passed away March 15, 2018 at the age of 79 following a stroke.

Fitting that Garrido ended his coaching career with 1,975 victories. 1975 was the first year the Cal State Fullerton Titans competed at the Division 1 level and subsequently advanced to the College World Series under Garrido’s direction.

Prior to the Friday night home game vs. Grand Canyon University, center field was painted with a large number 16 to honor Garrido and his iconic number he wore while directing the Titans. Prior to the game, the 2018 squad huddled before the outfield wall that honored the retirement of Garrido’s number on Feb. 17th, 2017 and bears his likeness.

Garrido is synonymous with the game of college baseball and it’s advancement and popularity. Spanning nearly a 50 year coaching career, Garrido compiled a record of 1,975-952-9, winning five National Championships. (3 with Cal State Fullerton, 2 with University of Texas)

Garrido coached the Titan Baseball team starting in 1973 before the team was Division 1 eligible. In 1975, in Fullerton’s first year of Division 1 competition, the Titans advanced to the College World Series under Garrido. Four years later in 1979, Fullerton would win their first of four national championships, three of those coming with Garrido at the helm.

The reaction on social media and the outpouring of emotion over Garrido’s passing has been immense and immeasurable. Former players and coaches from Fullerton, Illinois and Texas have all paid their respects to Augie via social media. In the mainstream media, numerous tributes have been published as well.

The College Baseball media also paid tribute to Garrido and his enormous impact on the game.

While at Fullerton, Garrido’s teams compiled an impressive mark of 875-341-5 for a winning percentage of .719, which is still the best in school history. In addition to his three titles with the Titans, he helped guide Fullerton to seven College World Series appearances and 16 conference championships, including 11 straight from 1974-84. He was named the National Coach of the Year six different times during his career (1975, 1979, 1984, 1995, 2002, 2005), with four of those instances coming with the Titans.

Garrido also met up with current Titans head coach Rick Vanderhook and the Titans just two weeks ago in Tulane, as he watched Cal State Fullerton win its first series of the year, taking two of three games from Tulane.

Garrido is survived by his Wife Jeanni and daughter Lisa.