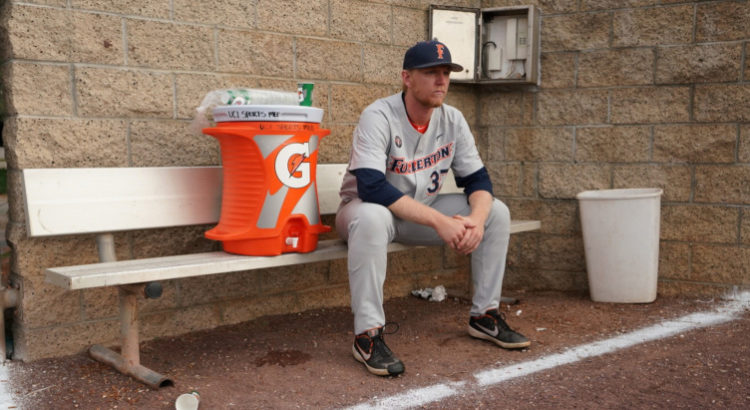 The calendar has turned to May which means Mother’s Day, Memorial Day and more importantly, selection Monday for the NCAA Baseball Playoffs. Unfortunately there will be no drama filled watch party for Fullerton fans. Getting an at-large bid from the committee is not in the cards this season. Although the Titans are not mathematically eliminated from winning the Big West Conference (read below for more on that), those chances are quite narrow.

Here’s a wrap-up on the past week and a look at what is to come.

Mitch Berryhill‘s streak of 47 consecutive games of reaching base safely came to an end on Sunday. After going 1-for-3 in Saturday’s loss to UC Irvine, Berryhill had four plate appearances and was unable to reach base safely. The streak was the longest in college baseball until Sunday.

The good news is that Berryhill started a new streak on Tuesday night at UC Irvine. Berryhill went 2-for-4 with one run to improve his batting average to .444 on the season. His .444 average currently leads the entire country. Berryhill would be the first Titan to win the national batting title if he can stay atop the rankings. Rarefied air indeed considering the numerous tremendous players to have worn the iconic Fullerton F. Not even Tim Wallach, Phil Nevin or Mark Kotsay won the NCAA batting title in the years they won the Golden Spikes Award.

Gary Brown currently holds the Titans single-season batting average record at .438. If Berryhill can maintain his average above .400 he would be the ninth Titan to do so in a single season. (Mark Kotsay batted .400+ in two seasons.) The others to have batted over .400 in a single-season include:

Since starting the season slowly and winning only one Big West Conference series (Cal Poly), Titan Baseball fans know the only avenue into the postseason is to win the Big West Conference. Not only do the Titans have to win the conference, they need teams in front of them to start losing in order to make a pathway. Despite losing two of three conference games to UC Irvine, the Titans are not officially dead… yet.

Cal Poly is leading the conference and this past weekend had their bye week where they played USC. The teams ahead of Fullerton in the Big West standings did not take advantage of the opportunity to separate themselves from the pack.

UC Santa Barbara dropped two of three to UC Riverside along with Hawaii losing two of three to Cal State Northridge. UCSB plays at CSUN this weekend while Hawaii travels to play at Cal Poly. UC Irvine will have a non-conference series with Iowa this weekend.

Fullerton can not jump into the conference lead with a sweep over UC Davis this weekend but could gain some ground if the Gauchos stumble and the Rainbow Warriors and Mustangs split.

Teams ahead of the Titans will face off with each other which could produce chaos and parity if nobody starts sweeping. Splitting series among the conference elites could potentially open the door for the Titans to somehow, some way sneak in.

Cal Poly still has to play UC Irvine and plays UC Santa Barbara to end the season. Hawaii needs to play Cal Poly and UC Santa Barbara. UCSB looks to have an easier path playing CSUN and Long Beach State before ending with Hawaii and Cal Poly. After seeing UCSB drop two of three to UC Riverside last weekend, the Gauchos do not look bulletproof as many have thought.

For the second time this season, junior catcher Daniel Cope was unable to finish the game due to an injury.

Cope was removed from the Tuesday non-conference contest vs. UC Irvine with an undisclosed injury that created a rather strange opportunity for the pitcher to bat. Cope started the game as the catcher and was batting third. Freshman Kameron Guangorena, the back-up catcher who filled in nicely while Cope was originally sidelined with a broken finger earlier this season, was batting seventh in the Designated Hitter spot.

Once Cope was injured and removed from the game, Guangorena moved behind the plate. That meant the pitcher now had to bat because the Designated Hitter can only be used for the pitcher and not a position player.

In the top of the seventh inning, Titus Groeneweg reached base on an error and would eventually advance to third. Groeneweg wouldn’t normally bat but the unique situation of the DH replacing a position player forced the pitcher to bat in the line-up.

The extent of the injury to Cope is unknown and hopefully will not prevent him from rejoining the line-up. If Cope is shut down for the remainder of the season, it means more time for Guangorena behind the plate. Guango is the future of this team moving forward and the injury to Cope could be a blessing in disguise to now get Guango valuable time and gain more comfortability behind the plate.

After dropping the first two games of the UC Irvine series, it appears that head coach Rick Vanderhook took a “what the F#*%” approach to Sunday’s game.

Michael Weisberg, the normal closer for the Titans, got the start. Timmy Josten, who started vs. Hawaii the previous weekend, came in and relieved for three and 2/3rds innings. Freshman Kyle Luckham, who had been starting regularly on Saturday nights, came in to close the game in the seventh inning and ended up getting the save.

In addition to the pitching shake-up, Daniel Cope was calling pitches from behind the plate. Normally pitching coach Steve Rousey calls the pitches but allowed the third year catcher to call his own game. On the day, the three pitchers combined for two earned runs on seven hits and struck out five. More importantly, all three Titan arms failed to give up a walk to the Anteaters on Sunday.

Might we suggest Daniel Cope getting more opportunities to call the pitches if he is healthy enough to do so. If Cope can’t do it, maybe train the young Guango to call a game. It will only help him while in the program and further development when he inevitably moves on to pro baseball after three years on campus.

Last week we informed our readers that Sahid Valenzuela needed Tommy John surgery. He went under the knife Thursday and tweeted out that it was a successful procedure.

Not the way I wanted my junior year to end but God has a plan and I have faith in it. Just a little bump in the road but I’ll come back better and stronger! Thanks to Dr. Shepard for getting me right and to everyone for all the prayers and support. Now time to get better baby!! pic.twitter.com/ImKhlVBlyF

Sahid is a draft eligible junior this season and had a solid summer playing in the Cape Cod League. Based on his body of work, Sahid could still get drafted and rehab with his new team. If he does not like his draft position or the money offered, he could return and play his senior year. Being a position player and not a pitcher, rehab for a Tommy John surgery is about six to nine months. If it is six months, he could be ready by December. Nine months would put him around February or March 2020.

Sahid will always be remembered as a great team player and a fantastic performer. No matter what decision is best for Sahid and his family, we wish him the best of luck and a speedy recovery.

Grand Canyon in, Washington out

The Fullerton Athletic Department announced that they have added a game to the schedule in order to fill the void the canceled Arizona State game left. The Titans will welcome in Grand Canyon University, Tuesday, May 7th. First pitch scheduled is for 6 pm. Season ticket game tickets issued for the Wednesday, March 6th ASU game that was rained out will be valid for this game. Season ticket holders who no longer have that ticket or lost it are encouraged to contact the ticketing office and they will reprint your ticket. Reprinted tickets will be available for pick-up at the will-call table.

The Athletic Department also announced that the rescheduled game vs. University of Washington, a rematch of last year’s Super Regional, has been canceled. Here is an excerpt from the email to season ticket holders regarding the Washington game cancellation:

Due to scheduling conflicts, the makeup Washington game, which was rescheduled for Monday, May 20th has been CANCELLED. Our Baseball program is looking to fill this game with another opponent before closing out the season. If a new game is scheduled, we will contact you as soon as possible and your original ticket for Washington, dated February 18th will be valid for this game.

If the Titans are able to fill the spot, it may come from a local, non-conference team like Cal State Bakersfield, Cal-Baptist or USD.

The Titans can get closer to the .500 mark this weekend if they can sweep visiting UC Davis. Even with a sweep, the Titans will be one game below .500 with 22 losses on the season. As we mentioned earlier, the opportunities are there with four conference weekend series still up for grabs. That’s 12 games against teams that are all on the bottom of the Big West standings.

The four upcoming games are all at home this weekend and Tuesday.