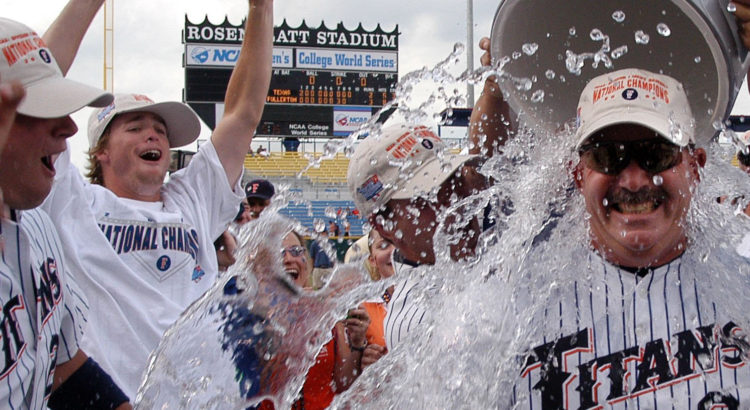 Just over a week ago Eric Sorenson, writer for d1baseball.com, posted this tweet:

#OnThisDay in CollegeBaseball: 2004
From the “Never Give Up” Department: A 10-1 loss to Long Beach St. drops the Cal State Fullerton @BaseballTitans to a record of 15-16. But 38 games later the Titans would win the 2004 national title in Omaha over Texas. pic.twitter.com/OPBdqy1HBL

This was a pleasant reminder that among the panic surrounding the rocky and tumultuous start to the 2018 season, great Titan teams of the past had bumpy starts as well. Most notably, the 2004 National Champions Cal State Fullerton Titans.

After 31 games in the books, the 2004 Titans and the 2018 Titans have some striking similarities. Will this year’s squad end the season with a dog pile in Omaha in June? That chapter has yet to be written.

But with 31 games recorded and 24 to go, (the 2004 team had 25 regular season games left) you can’t deny the eerily similar comparisons between these two teams.

Went to Omaha the year prior
The 2003 Titan Baseball team advanced to Omaha by hosting both the Regional and Super Regionals at home at Goodwin Field. The 2003 Titans swept the Fullerton Regional defeating USD and Notre Dame twice to face Arizona State in the Super Regional. The 2003 Titans needed all three games to advance to Omaha winning the first, dropping the middle game and then eventually trouncing the Sun Devils in the final game 7-1.

The 2017 Titans didn’t have it so easy although the result was the same. Shipped off to the Palo Alto Regional as a No. 2 seed, the Titans defeated BYU and then Stanford twice sending retiring Stanford Head Coach Mark Marquess on vacation earlier than expected. Traveling to rival Long Beach State’s Blair Field for the Super Regional, the 2017 Titans dropped the first game 3-0 but the second game set the tone for the remainder of the series. Forever known as the “touchdown inning”, the 2017 Titans plated seven runs in the bottom of the third to break the game wide open and eventually won 12-0. Game 3 had more drama but the result was the Titans heading to Omaha for the 18th time in the program’s 40+ year history.

In 2003, the Titans reached the CWS semi-finals only to fall to Stanford twice and were eliminated. The 2017 Titans went the dreaded “2-&-a-Q” and were bounced after losing to Oregon State and Florida State. Omaha experience was gained by both teams which proved (and could prove) to be valuable the following season despite coming up short at the CWS.

High preseason rankings only to fall completely out
Coming off a trip to the College World Series in Omaha, both the 2004 and 2018 Titan Baseball teams entered their respective seasons highly regarded by the various pollsters. In 2004, there were only two major college baseball polls, Collegiate Baseball and the National College Baseball Writers Association (NCBWA). In 2018, there are about five or six College Baseball polls. No matter the comparison years, the Titans had high expectations placed on them prior to the season. 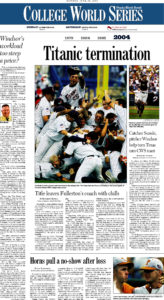 After stumbling out of the gate this year and in 2004, both Titan teams rapidly dropped out of the rankings completely. In 2004, after week 2, the Titans dropped to 15th and 16th in the Collegiate Baseball and NCBWA rankings respectively. Week 3 saw the 2004 Titans fall to 20th and 18th and by Week 4 the Titans were ranked 27th and 21st. By Week 5, the 2004 Titans dropped completely out of both rankings. (Keep in mind, in 2004, Collegiate Baseball ranked the top 30 teams and NCBWA ranked the top 35.)

The 2018 team has suffered the same fate as the 2004 Titans dropping out of the rankings completely to date. It only took the season opening series against Stanford to convince the Collegiate Baseball pollsters to drop Cal State Fullerton out of the rankings. The Titans have yet to even sniff being ranked by Collegiate Baseball this season since dropping out. NCBWA was less harsh to the Titans after the Stanford series, dropping them from No. 10 to No. 22. By the second week, the 2018 Titans dropped out of the NCBWA poll completely and have yet to climb back into any of the rankings this year.

Despite starting the 2004 season on January 30th, the 2004 Titans lost all three games in Palo Alto. Same result in 2018 in that this year’s Titan squad was swept by the Cardinal at Sunken Diamond Stadium. Starting 0-3 on the road is never good especially when championships are expected in Fullerton.

Similar Big West and non-conference schedules
Opening the season on the road against Stanford has been detailed but a closer look at the 2004 schedule and the 2018 calendar and they are almost identical. Common opponents include playing University of Houston the third weekend in February. The traditional non-conference series with Long Beach State was played at Goodwin Field along with the conference finale between these two rivals scheduled for the last weekend at Blair Field.

The home and away schedule in the Big West Conference aligns perfectly with the 2004 and 2018 teams. Home contests vs. Cal State Northridge, Cal Poly and UC Riverside combined with road series vs. UC Santa Barbara, UC Irvine and Long Beach State looks as though the 2018 Big West schedulers used the 2004 season as a blueprint to draw up the opponents for the Titans. 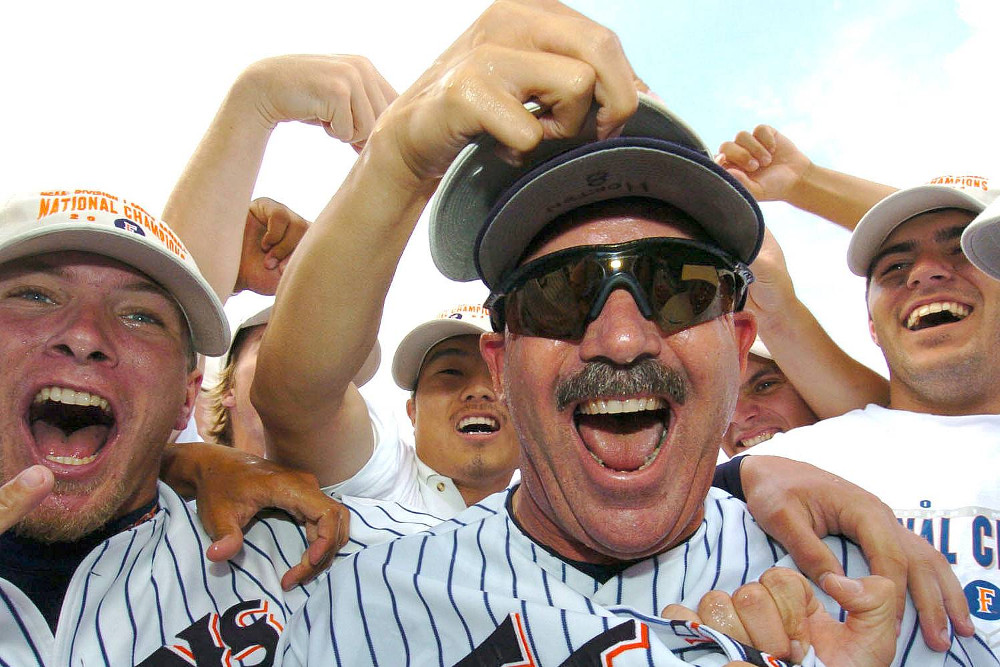 Seven to Eight year plan
Current Head Coach Rick Vanderhook enters his seventh year at the helm of the Titan Baseball program much like George Horton did in his eighth. Both coaches entered the years we are comparing with two trips to Omaha sandwiched between a Regional appearance in the three years prior.

The current Titans coaching staff has a 2004 look and feel to it as well. Vanderhook was a top assistant to Horton in 2004 as was current third base coach Chad Baum who was in his 5th season coaching the Titans. Current first base coach Neil Walton was in Omaha in 2004 but in the field with a glove on his hand. Walton played shortstop on the 2004 Titan squad as a sophomore.

From that point on, the 2004 Titans would only lose four more times (UCLA twice ) and only two losses in Big West Conference play (UC Santa Barbara and UC Riverside). They would end up sweeping conference home series vs. CSUN and Cal Poly along with University of Pacific, UC Irvine and Long Beach State on the road.

The 2018 team needed 30 games to get to .500 after sweeping Cal Poly over the weekend and last nights’ victory over Pepperdine lifted the team’s record to above .500 with a 16-15 win-loss record. The current team heads into the non-conference series vs. San Diego State on a six game win streak and with two losses in the Big West Conference already; the same number of losses the 2004 team lost in conference all season. 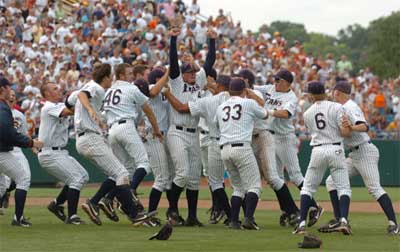 Similar Friday night starting pitchers
All Titans fans old enough to remember the 2004 National Championship know the iconic image above. Winning pitcher Jason Windsor about to be mobbed by teammates after the final out vs. Augie Garrido’s Texas Longhorns is an image that all Titan fans cherish. Many may not know that both Windsor and current Friday night starter Colton Eastman are strikingly similar.

Lest you forget, Windsor, before going on his epic run of winning 12 consecutive games in 2004, started off 1-4. Not what you would expect from a guy who would go on and become the College World Series Most Outstanding Player.

The same could be said of Colton Eastman starting the season 2-2 after being named to numerous preseason All-America lists. Eastman is now 4-2 on the season including his no-hitter vs. UC Santa Barbara and the most recent Friday night win vs. Cal Poly.

Both Eastman and Windsor pitch with similar styles and attitudes. Both pound the strike zone inducing ground balls to allow the infielders to play defense all while recording substantial strikeouts.

Conclusion
With nearly the second half of the 2018 season yet to play, will this year’s squad meet a similar fate of that of the 2004 team? Nobody can say for sure. (If anyone can predict the future please send them our way. The Super Lotto Jackpot in California is at $25,000,000 tonight.)

Without a crystal ball you do have to admit the similarities of this team are quite similar. Will 2018 end the same way 2004 did with a celebration in Omaha in June? Time will tell.

Speaking of time, time is running out on the Titans to keep their streak of post season invites and 30+ win seasons going. Something not to be overlooked is that the Titans have won national championships in every decade since joining Division 1. (1979, 1984, 1995 and 2004)

With this year and next the only years left in the 2010 decade, only two years remain to keep that streak alive. Five National Championships in five separate decades would cement Cal State Fullerton as one of the greatest college baseball programs of all time.

The start to the 2018 season was not what Titan Baseball fans wanted nor expected. Despite the gnashing of teeth and and frustration coming out of Goodwin Field, the season is not a total wash. The road to Omaha is a bumpy one. Good news is that the 2004 Titan Baseball team has shown it is not impossible to start slowly but finish strong when it counts.

The blueprint is there and history tends to repeat itself. Does this crop of Titans have it in them to join the Cal State Fullerton National Champion teams of the past?