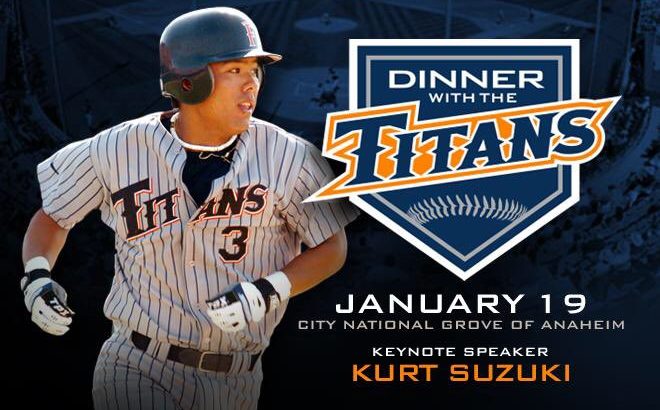 2017 Cal State Fullerton Hall of Fame inductee and current Major League baseball player, Kurt Suzuki will be the keynote speaker for the 12th annual Dinner with the Titans fundraiser, which will take place at the City National Grove of Anaheim on Friday, January 19th.

Registration is now open for the Cal State Fullerton baseball program’s biggest fundraising event of the year. It serves as an opportunity for Titans fans to meet and mingle with the current team and coaches as well as former Titan greats. Reservations begin at $150 for individual tickets.

The evening will include dinner and drinks, live music and silent and live auctions. Funds raised from Dinner with the Titans will directly benefit the Titan Baseball program. (A signed Justin Turner Dodgers jersey seen at Casino Night will be auctioned along with other prizes and memorabilia.)

This event is expected to sell out.

Kurt Suzuki is one of the most notable Titans of all-time, as he spent three years (2002-04) as arguably the best catcher Fullerton has ever seen. Suzuki put together a special career at Cal State Fullerton, which culminated with a senior season that saw him hit .413, recording 16 home runs and 87 RBI on his way to claiming the Brooks Wallace Award. He also was also presented with the Johnny Bench Award. The Brooks Wallace Award is given to the nation’s most outstanding player, while the Johnny Bench Award is handed out to the country’s best catcher.

While Suzuki’s personal statistics were second to none, he was also an instrumental part of Fullerton’s 2004 National Championship squad.

After Cal State Fullerton, Suzuki’s baseball career was far from over, as he was drafted by the Oakland Athletics in the second round of the 2004 MLB Draft. Since being drafted he’s played for the Athletics, Washington Nationals, Minnesota Twins and Atlanta Braves.

Suzuki is set to enter his 12th season in the big leagues and enjoyed his best year in 2014, as he was named to the American League All-Star team as a member of the Twins.

Cal State Fullerton wrapped up the 2017 season with a 39-24 overall record, notching the 43rd straight 30-win season for the Titans and most importantly the program’s 18th consecutive trip to the College World Series in Omaha.

Fullerton made its 39th NCAA Tournament appearance in 2017 in 43 seasons at the NCAA Division I level. It was the Titans 26th straight postseason berth, the second longest active streak behind Florida State (40).

$2,500 Silver Sponsor
– seating for nine guests plus one current or former Titan baseball player at your table
– access for two for VIP cocktail hour with open bar
– Titan gift basket