It appears that the Long Beach State inferiority complex is worse than perceived. Why else would Long Beach State allocate such a limited number of tickets out of 3,283 seats at Blair Field to Cal State Fullerton? Sounds like they are trying to gain a home field advantage in a Super Regional that is designated by the NCAA as a neutral field.

This move by Long Beach State should come as no surprise to anyone that follows college baseball. Long Beach State has always felt like the little brother when comparisons to Cal State Fullerton have come up.

Blair Field seating capacity is 3,283 not including Standing Room Only areas. Call State Omaha is estimating that “Cal State Fullerton was allotted a small number of tickets” translates to Long Beach State only gave Fullerton less than 1,000 tickets. Based on the limitation of the small allotment of tickets being only available to full season ticket holders only, i.e. not special package season ticket holders like the “Any Given Sunday” or Friday Night Lights” mini-package members, Cal State Omaha is estimating that the 1,000 ticket estimate is probably too generous and the real number could be closer to half of that.

🎟for the Super Regional are limited & we can't guarantee sales at this time. If🎟are released, they will be sold by LBSU only. Stay tuned!

Long Beach State on their website and in social media channels stated that their allotment of tickets would be sold to season ticket holders, boosters, alumni, former players and students first. Remaining tickets not sold to the Long Beach State fair weather fans will be sold via the Long Beach State ticket office. All-Session ticket sales will begin on Thursday at 2 pm.

A very limited number of All Session tickets will be available online and at the Pyramid box office tomorrow starting at 2pm. #GoBeach

pretty bush league to limit the number of tickets for @BaseballTitans fans. What are you afraid of little brother?

Based on demand and online activity, single game tickets will be very hard to come by. Before tickets were even printed, a listing for a third base side ticket was selling for nearly $300 on StubHub. Mind you, this ticket was for the Sunday, “if necessary” game that could never be played if either Fullerton or Long Beach sweeps the Super Regional series. 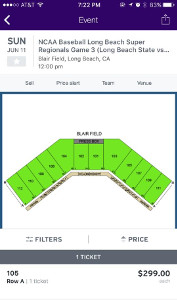 As of yesterday, that ticket was sold and is no longer available on StubHub.

But to only allocate such a small percentage of the stadium seating capacity to the visiting team in a facility that is deemed by the NCAA as a “neutral field” is bush league. It smacks of an inferiority complex and knowing which baseball program is truly the dominant force in college baseball.

What are you so afraid of Long Beach?

Afraid if you allocate half of your stadium (1,641 seats) to the opposing team you will lose your home field advantage? Afraid that knowing it is only a 30 minute drive in from Orange County and Fullerton fans travel really, really well? Afraid that Blair Field will be overrun with Cal State Fullerton Baseball fans? Does the mere sight of orange and blue filling your stands make you sick?

Sounds like someone is trying to stack the deck in order to gain a home field advantage in a stadium that is supposed to be neutral.

We should feel pity for Long Beach State for their paltry success they have had in comparison to what Cal State Fullerton has accomplished. Despite Long Beach State trying to suppress the chats of “Let’s Go Titans!” in the stands of Blair Field, it stands to be a great Super Regional series.

Here’s to sweet redemption this weekend and seeing the Titans dog pile on the Blair Field pitcher’s mound as they celebrate their 18th trip to Omaha. If that happens, sadly for the Long Beach State Dirtbags, their number of trips to Omaha will remain at four.