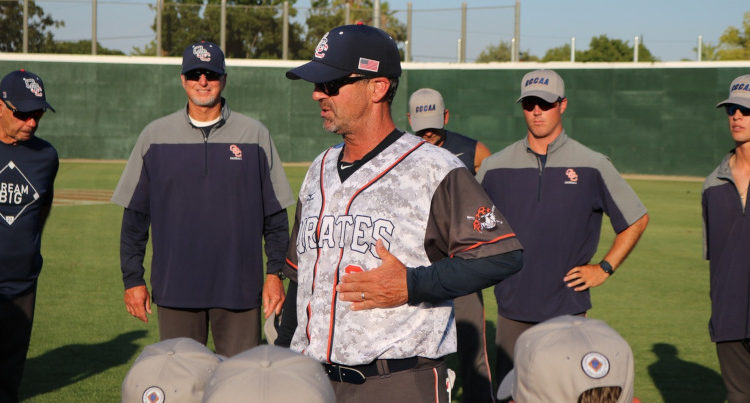 The baseball community is mourning the loss of John Altobelli, Head Coach of Orange Coast College after he, his wife Keri and daughter Alyssa, all perished in the helicopter crash that took the lives of nine total, including NBA superstar Kobe Bryant and his daughter Gianna Bryant.

The cause of the crash remains unknown but the helicopter was flying in very foggy conditions Sunday morning. The conditions were dangerous enough that area police agencies grounded their helicopters.

RELATED: OC Register – Family ‘heartbroken’ over loss of Sarah and Payton Chester, who died in helicopter crash with Kobe Bryant

Payton’s mother, Sarah Chester, Christina Mauser, basketball coach at Harbor Day School in Newport Beach where Kobe’s daughter attended school, and Ara Zobayan the helicopter pilot were among those that died in the crash.

While the outpouring of sympathy and mourning for Kobe Bryant was felt far and wide, the baseball community, especially in Orange County was hit just as hard. John Altobelli coached the OCC Pirates for 27 years and most recently won the California Junior College state championship in 2019. Altobelli served as a head coach of the Cape Cod League’s Brewster Whitecaps from 2012 – 2014.

Many turned to social media to express their condolences and to mourn the passing of Altobelli. Titans Head Coach Rick Vanderhook:

Legends never die.Sending prayers to the Altobelli and Bryant family on this sad day. RIP

The connections with Cal State Fullerton Titan Baseball run deep. Tim Matz is the pitching coach for OCC and bridged the gap of Titan Baseball converting to a Division 1 program from 1974 to 1975.

J.J. Altobelli, John’s oldest son, served as the volunteer assistant coach for Titan Baseball in 2016 and coached first base when the Titans were at bat. A 2013 graduate from the University of Oregon, Altobelli played four seasons (2010 – 13) at shortstop for the Ducks and head coach George Horton. He is currently a scout for the Boston Red Sox organization.

It was Alto’s dream to be able to coach for his country. He made a huge impact! pic.twitter.com/81clzvoECT

Past Titan players with roots at Orange Coast College and Coach Alto include Chris Prescott and Scott Serigstad.

Serigstad, a right handed pitcher, played for the Titans in the 2016 season and led the team with 27 appearances out of the bullpen. Serigstad recorded four saves and notched a 1.22 ERA in 2016 before getting selected in the 15th round (441st overall) by the Milwaukee Brewers.

Prescott played two years with the Titans during 2017 – 2018 seasons primarily in left field and played in the 2017 College World Series. He is currently an assistant coach for OCC.

Rest in Peace to the goat, my mentor, and my friend, Alto. One of the greatest people i’ve had the opportunity of knowing. Your legacy will live forever, Coach. #dreambig #foreverapirate #negu pic.twitter.com/azunAO5eQD

Altobelli, 56 and better known as “Coach Alto” or just “Alto,” was entering his 28th season as Orange Coast College’s coach. In 2019, Altobelli was selected as the American Baseball Coaches Association’s national coach of the year following a season in which he led the Pirates to a state championship, their fifth during Altobelli’s tenure. He got his 700th career coaching win during the California community college playoffs.

Orange Coast College’s Foundation has established the Altobelli Family Memorial Fund. Those wishing to donate can do so HERE.