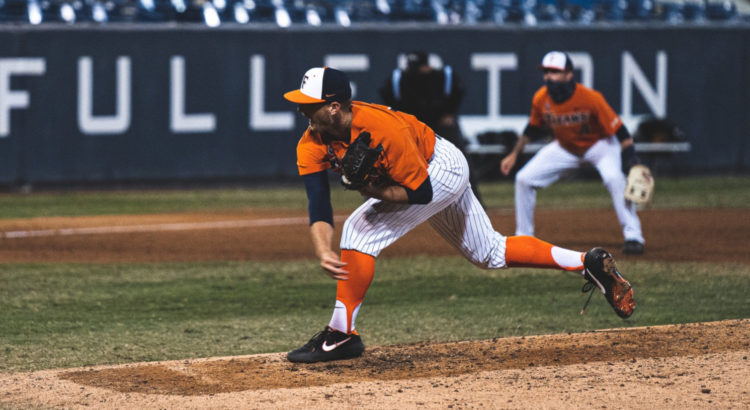 No matter the sport, “Defense Wins Championships” is cliche for a reason. It’s true. In the case of Titan Baseball in 2021, if they want to get back to Omaha, the pitching and defense will need to be rock solid to get to the Promised Land of College Baseball. Considering last year’s offensive performance, it looks as though the pitching will need to carry the water for the Titans in 2021.

In the wake of all the bad news coming out of 2020, (Coronavirus pandemic shortened season and the disastrous 4-12 start) the good news coming into 2021 is Titan Baseball pitching looks strong… really strong. The defense, especially up the middle, looks to return to top form yet again. (More on the projected Titan batter in 2021 coming.) Can Titan Baseball fans start booking flights and hotels in Omaha on the eve of the opening series vs. Utah? If the bats can improve on the abysmal .214 batting average from 2020, the Titans are looking tough… and deep.

Tanner Bibee was supposed to ride off into the MLB Draft sunset last season and Titan Baseball fans didn’t expect to see Bibee back on campus this year. The COVID-19 shortened season combined with a contracted MLB draft down to five rounds brings Bibee back to Fullerton for his Senior year in the classroom. Despite 2021 being Bibee’s fourth year on campus, he still retains his his Junior year of NCAA eligibility.

2020 marked the first year since Cal State Fullerton Baseball joined the Division I ranks to not have a Titan selected in the MLB Draft. Had the NCAA not canceled the 2020 season and the MLB Draft not been shortened from 40 rounds down to five, Bibee assuredly would have been drafted. Bibee did have interest from MLB teams in 2020 but with numerous teams looking to low-ball college players by offering bargain basement signing bonuses, it’s likely Bibee invested in himself and returned to campus.

That sound you just heard was the collective cheer from Titan Baseball fans who won’t be allowed to watch Bibee in person, at least to start the season, reacting to the news that the “Friday Night Ace” is back on campus for another year. Not since 2015 and Thomas Eshelman has the Titan Baseball program had a pitcher start three season opening games. Despite Bibee’s hard luck 1-3 record in his four starts in 2020, his 2.73 ERA and 33 Ks in 29 2/3rd innings pitched, clearly defines him as the ace of the staff.

After the 2020 season was shut down, Bibee got to work. Bibee improved his body and his pitching with the new found time off. He opted to not play summer ball for one of the handful of summer baseball teams able to play amid a global pandemic. He rather chose to improve his pitching at Driveline Baseball. While there, Bibee’s velocity improved with his fastball hitting 95 MPH in the fall practices.

Bibee’s calling card has never been overpowering hitters but rather locating the baseball and deceiving them with off-speed stuff. With the improved velo, it looks as though Bibee will be missing bats in 2021 with his fastball in addition to his devastating slider. Speaking of his slider, Bibee shared on social media that he was throwing an 86 MPH slider with 3000+ spin rate. For the uninitiated on baseball analytics, a slider that fast with that much spin rate in nearly unhittable because of the depth it provides and deceptiveness to hitters.

Because of the lengthy off-season and Bibee’s work ethic, he is a surefire lock to start the weekend series all season long. Although Bibee is still a Junior, this will probably be his final season at Fullerton and should get selected within the first five rounds of the 2021 MLB Draft.

Without coming out and saying that Luckham has locked up the job, all signs point to the big righty toeing the rubber for the Titans on Saturdays. The knock on Luckham has been his consistency and he can sometimes get in his own head if an umpire call does not go his way or if the baseball takes a bad bounce. If Luckham can learn to shake off bad calls and have a short memory, he should turn into a devastating pitcher in 2021.

Welcome back Timmy Josten! After sitting out the COVID-19 shortened 2020 season rehabing a back injury, Timmy Josten looks to return stronger and better than ever.

Josten showed flashes of his pitching ability in 2018 and 2019 but never really shined. His ERA in both his first and second seasons hovered around 4.15 but those stats came during the two years while Steve Rousey was the pitching coach. Apparently Josten has really responded to the guidance and tutelage from Dan Ricabal and should break out and show Titan fans what we have all been waiting to see out of him.

Titan Athletics Director Jim Donovan who has over 250 Titan athletes across 13 teams to oversee, made a point on Episode 38 of the 1544 Miles to Omaha Podcast to mention Timmy Josten as one of the players who really has improved over last season. Josten along with reliever Landon Anderson, joined Bibee at Driveline Baseball and appears to have really used the time off to his advantage.

Last year’s Sunday starter has moved on. Joe Magrisi transferred to Palomar Community College for the fall semester and is now playing in the Spring for Southern Nevada JC. That opens up the Sunday role and Peyton Jones, the lefty from Utah looks to fill that role.

Jones appeared in six games in 2020 before the season was cut short and has looked good in fall and spring practices. If it shakes out that Jones rounds out the weekend starting rotation, opponents will have to game plan to face two right-handers (Bibee & Luckham) and two left-handers (Josten & Jones) for a series.

Ryan Hare is a graduate transfer from UNLV but is coming home to finish his final year of eligibility. A native of Lakewood, Calif., Hare is a Tommy John surgery survivor and appears to show no ill effects from it.

In the 2020 pandemic shortened season, Hare entered the season as UNLV’s Friday night starter and was selected by national publications D1Baseball and Perfect Game as the pre-season Mountain West Conference pitcher of the year. Not too bad anytime you can get a graduate transfer who served as a Friday Night starter that can throw with high velocity.

Hare throws in the mid-90’s and in addition to that velocity, brings leadership and maturity to a role that requires nerves of steel. The closer role is not always handed to the guy who throws the hardest or fastest. The closer role is more about mentality over pure stuff. Hare as a closer can rear back and throw heat with confidence knowing he has been in high pressure situations and has the experience to get out of them.

Michael Weisberg was the closer in 2019 but his lack of control and ability to consistently throw strikes allowed newcomer Evan Adolphus and veterans Matthew Sanchez and Titus Groeneweg to earn the 2020 late innings. Weisberg’s reminds us of Ebby Calvin ‘Nuke’ LaLoosh, Tim Robbins’ character in the iconic baseball film, Bull Durham. The velocity is there but the lack of command is a concern. If Weisberg has dialed in his control, look out.

Freshmen Christian Rodriguez and Jake Vargas could steal some innings in 2021 and the coaches are high on both right-handed newcomers. Lettering all four years at Bishop Amat, Vargas arrives on campus and should see time out of the bullpen should Titan pitchers get into trouble. The Titans benefited by a smaller MLB draft in 2020 in that Rodriquez landed on campus. Coaches and experts alike agree that had the draft been longer, C-Rod would have been drafted and his upside would deter pro clubs from offering a low signing bonus.

Evan Adolphus should improve on his abbreviated 2020 season when he recorded a 1-0 record and two saves. Matthew Sanchez also figures to see back end innings after spending the off season and summer improving his game. Sanchez’s off speed and breaking balls are downright filthy and it’s no secret why his teammates have nicknamed him “Dirty”.

The middle relief guys are strong and deep this year with Michael Knorr, a former weekend starter, leading the way. Look for lefties Landon Anderson and Titus Groeneweg to continue in their roles as bullpen stoppers and further confound batters from the left side.

The NCAA has waived roster limits for 2021 and the depth on this year’s Titan team is apparent. Ricabal is pleased with this year’s pitching crop and believes their experience, work ethic and talent can power the Titans to a successful season.

We’re predicting the Titan pitching and defense will be lights out in 2020. Can the offense provide enough power to get the Titans back to prominence? That question remains to be seen and we attempt to answer those questions in our Projected 2021 Titan Baseball Roster – Batters up next.