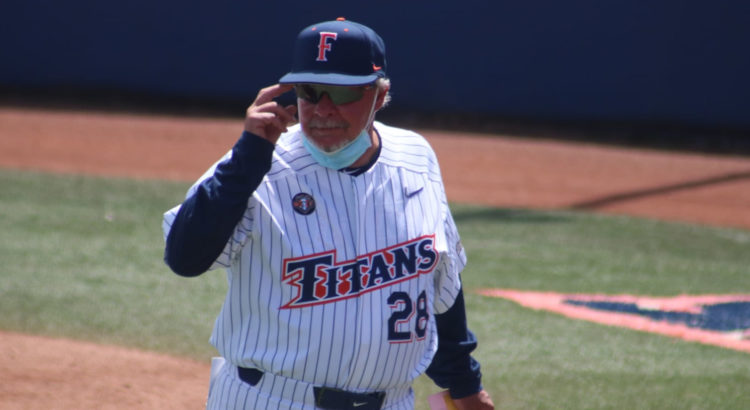 By now many of our readers have seen the news break late on social media on Friday that Cal State Fullerton Head Coach Rick Vanderhook in a joint announcement with CSUF Athletic Director Jim Donovan that Vanderhook has decided to retire, effective December 30, 2021. Until his effective retirement date, he will be serving in a role as special assistant to the athletic director.

The announcement set off a flurry or reactions all over social media. Twitter appeared to be the most active with numerous college baseball reporters breaking the news.

Aaron Fitt, Co-Editor and national writer for D1Baseball was one of the first national college baseball writers to break the news via Twitter:

The Rick Vanderhook era is over at Fullerton, as Hook will retire as head coach of the Titans. Not a good ending to his tenure this year, but Hook was part of some very big things over the years at Fullerton, first as an assistant and then as a head coach. https://t.co/MzncoYZw1X

Big news out of one of the most storied programs in college baseball.

Head Coach Rick Vanderhook of ⁦@FullertonBSB⁩ is retiring. He’ll step aside while a new coach is hired, serving as a “special assistant” in the athletic department until 12/31. https://t.co/wsaRVuuzWs

Murray followed that tweet up with a suggestion as to which coach CSUF Athletic Director Jim Donovan should put on the short list:

One of the first phone calls I’d make if I were @FullertonBSB AD Jim Donovan is to former Titan pitching coach Jason Dietrich, now PC at @ECUBaseball https://t.co/UDYB48Ldft

It didn’t take long before coaching colleagues and former players took to social media to express their congratulations and gratitude for Rick Vanderhook.

TCU Pitching Coach Kirk Saarlos who pitched for Cal State Fullerton while Vanderhook was an assistant coach notes that Hooky was the coach to give him his start in college baseball coaching.

Congrats on a wonderful career Hooky. ⁦@rick_vanderhook⁩ is ⁦@FullertonBSB⁩ baseball. He took a chance on me 10 years ago and gave me a start in becoming a coach. Thanks Hook, enjoy retirement. pic.twitter.com/XoSjnVuQ31

Dave Serrano, Head Coach at Cal State Northridge, coached with Vanderhook on the 2004 National Championship team and expressed his gratitude for his friendship and for his contributions to the Titan Baseball program over the years.

Want to take this time to wish ⁦@rick_vanderhook⁩ all the best in his retirement. A great baseball man and an even better and loyal friend. Thanks for everything you’ve done in all your years as a Titan. A huge part of lots of success and championships. You’re a True Titan! pic.twitter.com/nQWrYBuZSY

Anthony Hutting played his last two years for Vanderhook and is now the Head Coach of Cypress College, offered these words:

Love this man. Titan baseball isn’t what it is without Rick Vanderhook. Thanks what you did for me and so many others. Enjoy retirement Hooky! https://t.co/2sHWvQiJcs

Thomas Eshelman pitched for the Titans on Friday Night from 2013-2015 and is currently with the Baltimore Orioles said on Twitter:

Love this man and everything he did for me, my family and the program. One of the best. #Hooky https://t.co/eIsIlMLQ1b

Eshelman’s father, Dave Eshelman, tweeted that Hook was like a second father to his son:

In the Titan Athletics press release, it stated that a search for a new head coach will begin immediately. Speculation as to who will replace Rick Vanderhook and become the sixth Head Coach in Titan Baseball history has already started by fans and college baseball pundits. We will dive into the potential candidates at a later date but until then, we leave you with a photo gallery of Rick Vanderhook through the years as an assistant and head coach of the Cal State Fullerton Titan Baseball program.