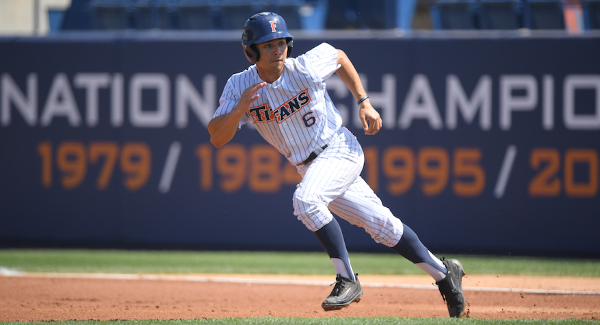 Junior right handed pitcher, Connor Seabold was the first Cal State Fullerton Titan drafted in 2017 and was first to sign a professional contract. Seabold got a reported $525,000 bonus for signing with the Philadelphia Phillies.

Catcher Chris Hudgins (16th round to the Royals) and left handed pitcher John Gavin (8th round to the Giants) both signed with their respective teams and will not be returning to Fullerton.

Love being a @Royals pic.twitter.com/f5uKdgmvv9

But what about the other Titans drafted? They still have time to decide if they want to go pro or come back to the Fullerton campus but the July 7th deadline is rapidly approaching.

Here at Cal State Omaha, we’ll take a look at those unsigned players and make an amateur prediction on the likelihood of them signing or the possibility of them returning. First up, the second player to be drafted in 2017 from Cal State Fullerton, Scott Hurst.

Hurst is an interesting prospect indeed. Major League Baseball ranks the top 200 draft prospects prior to the MLB draft and Hurst was the fourth player drafted that was not ranked within the top 200. (Freddy Tarnok – 80th, Tyler Ivey – 91st and Wyatt Mills 93 overall) Add to the fact that Hurst despite being drafted in the third round, was the Cardinals first draft pick in the 2017 MLB draft. (The Cardinals sacrificed their first-round pick to sign free agent Dexter Fowler from the Chicago Cubs. The team’s second-round pick and Competitive Balance Round B pick went to the Astros as part of the punishment and restitution for former scouting director Chris Correa hacking the Astros’ information systems.) With three potential picks gone from the red birds, to use their first pick on a guy who was not in the top 200 of draft prospects shows that the Cardinals organization had a lot of faith and high regard for Scott Hurst. But signing the 2017 Titan Baseball home run leader may not be a slam dunk.

The projected signing bonus for the 94th draft slot in 2017 is $570,900. Not a bad haul for a guy who went undrafted out of Bishop Amat High School in 2014. But just because the draft slot is projected over a half million dollars does not mean that is the number a player signs for. The aforementioned Wyatt Mills, the right handed pitcher from Gonazaga drafted by the Seattle Mariners in front of Hurst, signed for $125K, $454,800 below slot. The player selected right after Hurst, Joey Morgan the catcher from Washington, signed with the Detroit Tigers for the full slot value of $564,000. Pile on top of these comparable figures, the Cardinals sit at the bottom of the list of bonus money available to use to sign drafted players. The Cardinals have only $2,176,000 in bonus money to sign their drafted players without incurring a penalty. 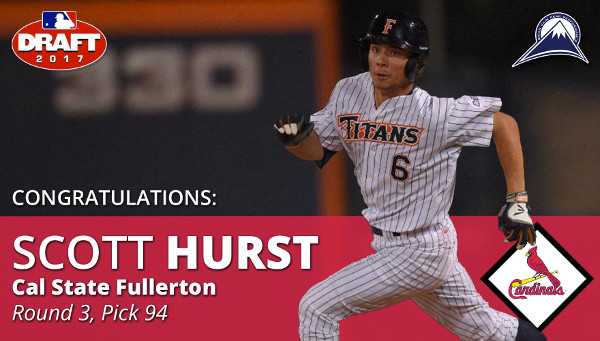 (A team that outspends its pool by 0-5 percent pays a 75 percent tax on the overage. At higher thresholds, clubs lose future picks: a first-rounder and a 75 percent tax for exceeding their pool by more than five and up to 10 percent; a first- and a second-rounder and a 100 percent tax for more than 10 and up to 15 percent; and two first-rounders and a 100 percent tax for more than 15 percent. Bonuses to players drafted in rounds 1-10, 100 percent of that money counts towards the bonus pool. Bonuses paid to players in rounds 11-40 that exceed $125K, the amount over counts towards the bonus pool, i.e. Terry Fuller, a high school outfielder drafted by the Cardinals in the 15th round, signed for $200K. His bonus was above the $125K slot for players drafted rounds 11-40 which means, $75K counts toward the total bonus pool of $2,176,000.)

As of today, the Cardinals have used up $623,100 of the $2,176,000. That’s only 28.6 percent of their total bonus pool allotment with half of their top eight draftees signed. Also consider that the ninth and 10th draft picks signed for pennies on the dollar compared to their draft slot.

Ninth rounder Evan Kruczynski the left handed pitcher from East Carolina was slotted for sign for $140,600 but signed for $3,000, saving the Cardinals $137,600 towards the bonus pool. Brett Seeburger the lefty drafted in the 10th round out of San Diego State also signed for $3,000, $129,800 below the $132,800 slotted for the 304th overall pick. The rationale for these players signing for well below slot value could be that both are seniors and have no negotiating power when it comes to bargaining for a higher signing bonus. Seniors who have exhausted their college eligibility have zero leverage in the bargaining process whereas college juniors, high school and junior college players have the option to go to college and the MLB clubs have essentially “wasted” a draft pick on that player. Add to it that if player drafted in the top 10 rounds does not sign, the slot value from that pick is removed from the bonus pool.

Consider that the player the Cardinals selected after Hurst, Kramer Robertson, the shortstop from LSU has yet to sign. Robertson is currently still playing in the College World Series Finals in Omaha and players still playing college baseball do not sign contracts until their season is finished. Also, Robertson could sign for significantly lower than his draft slot value because he is a senior. We mentioned earlier, college seniors have little negotiating power when it comes to signing bonuses above slot value. If Robertson signs for significantly less than the $424,800 slot value for his overall draft spot at No. 124 overall, that could free up more bonus money for the Cards to offer to Hurst or other draft picks without entering that 5% penalty danger zone. As a fourth rounder and a college senior, Robertson probably won’t sign for the paltry $3K the other college senior Cardinal draftees signed for, but will probably sign for around $100K. If Kramer Robertson signs for that projected amount, he would save the Cardinals about $300K in bonus money to be used on underclassmen.

In the sixth round, the Cardinals selected Zach Jackson, a left-hand hitting catcher from Winter Haven High School. Johnson came into the draft ranked No. 133 out of the top 200 prospects so the Cardinals getting him at pick 184 was a bit of a steal. Left-handed hitting catchers are typically in high demand, but short supply. Jackson, who hails from the same high school that produced Carson Fulmer and Jordan Schafer, isn’t among the top backstops in the 2017 draft class, but his skill set made him a target for the Cardinals. Jackson is committed to play college baseball at the University of Florida, a team that is playing in the 2017 College World Series. Jackson’s power potential from the left side of the plate could be enough to entice the Cardinals to offer him enough to keep him from heading to Gainseville. Jackson’s sixth round slot comes in at $243,500 and it wouldn’t surprise us if the Cardinals offer above that.

The Cardinals eighth rounder, Wilberto Rivera, a right handed pitcher from the Carlos Beltran Baseball Academy, is slotted to sign for $155,600. The Carlos Beltran Baseball Academy is a prep school in Puerto Rico that focuses on athletic development and preparing young players to get drafted. Rivera is currently committed to Florida International University and has options if the Cardinals do not come in with a respectable bonus offer.

Things to consider when projecting if Hurst will sign include the position where the Cardinals drafted him, the amount of bonus money committed and could be potentially forfeited, negotiating leverage as a junior along with Hurst’s public behavior on Twitter.

Considering Hurst was the Cardinals first pick despite being taken in the third round, Hurst is the Cardinals first choice. If the Cards fail to sign Hurst for whatever reason, that would mean the Cardinals missed out on the potential to improve their organization with four top draft picks. (Remember the picks forfeited due to trade and penalty?) There must be immense pressure on the Cardinals GM to get Hurst signed and has probably been authorized to offer slot or above slot. Also, the prospect of losing $570,900 in bonus pool money and coming away with nothing if Hurst chooses to go back to Cal State Fullerton must make Cardinals executives sick to their stomach.

The knowledge of the aforementioned reasons, you have to assume that Hurst and his surrogates will be able to use his status as a junior to leverage the maximum signing bonus. If negotiations stall or become tenuous, a simple reminder that Hurst hit four home runs in one game (vs. Cal State Northridge) and could come back to Goodwin Field in Fullerton with open arms by coach Rick Vanderhook, would get the Cardinals back to the negotiating table quickly.

If perception is reality, Hurst’s social media activity could tip his hand for how he is leaning. In Scott Hurst’s Twitter feed, his pinned tweet includes a message of gratitude to the Cardinals for selecting him in the third round.

Can’t even put into words on what happened today. Thank you so much @Cardinals for giving me the opportunity to make my dream come true! pic.twitter.com/SmK6CosBJG

That 20 percent chance of Hurst returning to Cal State Fullerton is based on his Twitter feed (@ScottieHurst) as well. Sure his pinned tweet thanks the Cardinals for drafting him but there are no other tweets paying homage to the Cards. On the day the Titans were traveling to Omaha for the College World Series, Hurst tweeted a photo of him wearing a St. Louis Cardinals hat in a hat store at the airport. That photo was tweeted a day after Hurst was drafted but has since been deleted and is no longer visible.

Hurst also retweeted on June 19, 2017, a quote from Timmy Richards.

“This is why I came back. Can’t say how proud I am to be a Titan.” – Timmy Richards

Timmy Richards was drafted in the 18th round of the 2016 draft as a junior but chose not to sign and returned to Fullerton for his senior season. Richards’ return to school was rewarded with a second trip to Omaha for the College World Series. While in Omaha, Richards hit a home run in each of the games the Titans played in the 2017 College World Series.

Hurst’s stat line for the two games in Omaha was decent but not terribly noteworthy. Hurst went 0 for 3 with a walk, and a run scored in the opening game vs Oregon State. In the elimination game, Hurst did better going 1 for 3 with an RBI and a run scored vs Florida State. Possibly Hurst’s personal performance and the team’s “two and a Q” performance in Omaha has motivated him to want to come back to Fullerton?

Speculating on social media activity is one thing but a big, fat six figure cashier’s check is another. If Scott Hurst chooses to decline the bonus money the St. Louis Cardinals offer him and return to Cal State Fullerton for a senior season, we here at Cal State Omaha will be quite surprised. Stranger things have happened but given all the factors Scott Hurst is facing, we think he will be gone and be tweeting images of him wearing a Cardinals jersey, an ink pen and a contract in front of him.