The Titans dodged raindrops while at home and dealt with wind and high altitude on the road. Here are our takeaways from the past week in Titan Baseball. 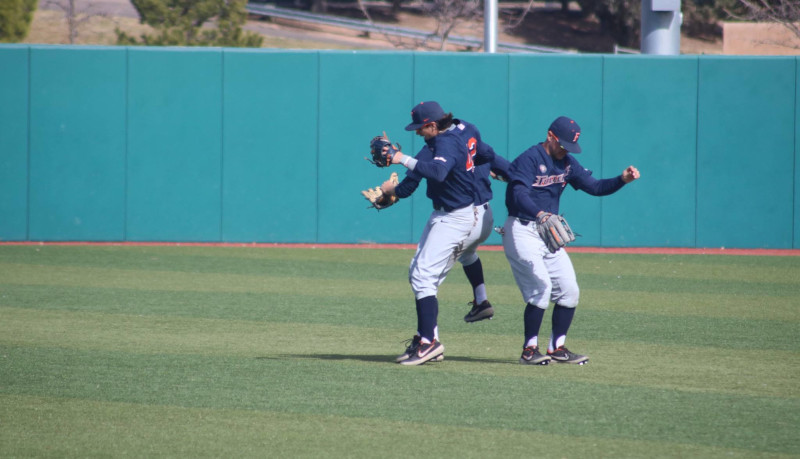 The Titans are a perfect 4-0 on Sundays in 2019. That accounts for four of the Titans six wins this season. The other two wins came on Fridays vs. TCU and Missouri State.

Saturdays on the other hand have been nightmares. Of the three games played on Saturdays, (Not including the second game of the Stanford double header that was played on Friday) the Titans have given up a total of 37 runs. 31 of those 37 runs were earned.

Hopefully, this Saturday vs. James Madison University, will be a different story

Sure it was a small sample size but we got to see Brady Barcellos pitch 1 1/3 innings out in New Mexico. On a day when Michael Knorr, Landon Anderson and Evan Larsen surrendered 15 earned runs, Barcellos gave up one hit, struck out one and zero runs.

Recording four outs is not enough to name Barcellos the Friday night starter yet but on a day when the New Mexico Lobos were destroying the ball, Barcellos held his own.

As we predicted in last week’s Takeaway Tuesday, Titan fans got their first glimpse Joe Magrisi.

Magrisi entered the ASU game and pitched the fifth and sixth innings. Magrisi gave up one hit, a double to Carter Aldrete, walked two and struck out three. The three strike outs came against Myles Denson, Trevor Hauver and Hunter Bishop.

Timothy Josten is scheduled to start tonight’s game vs. USC and after Magrisi’s performance against ASU, do not be surprised if Magrisi is called upon to throw two or three innings in relief.

There are a lot of bright spots regarding the newcomers but none brighter than Jackson Lyon. He really surprised to open the season but was noticeably missing this past week.

Lyon was not in the starting line-up Tuesday when facing Arizona State and did not play at all out in New Mexico. Lyon is apparently a little banged up and is on the mend. It appears to be a back injury. Maybe a little time off will help get him back soon.

In the meantime it appears Isiah Garcia will be getting the majority of the at-bats in Lyon’s absence. The JC transfer has proven a viable replacement hitting .533 with five runs scored, five RBI and two walks since entering the regular line-up starting with the Arizona State game.

With the Titans losing to higher ranked teams in the polls, the overall RPI is taking hits left and right.

The win over TCU is not looking all that impressive with the Horned Frogs tumbling in the polls. Depending on how Oklahoma finishes the season, that win could prove to be helpful in the RPI.

The PAC-12 schools that could have helped the Titans’ RPI had they beaten them, Stanford and Arizona State, ended up defeating the Titans and further hurting the Titans RPI. Losing the series to New Mexico did the Titans no favors in the RPI department either.

Looking ahead to the schedule, it appears that USD, UC Santa Barbara and UC Irvine are the only other teams that could have high RPI potential. Unfortunately those opponents account for eight games on the upcoming schedule. That means in order to gain entry into the postseason, the Titans will have to win the conference again to earn the one and only postseason bid the Big West Conference is guaranteed to receive.

Titans fans should start rooting for teams Fullerton has already played to start winning. To improve the RPI of the Titans, if their opponents are highly regarded, that helps the Titan RPI. If New Mexico can stay hot, that will bode well for the Titans.

It looks as though it will be a three horse race between UC Santa Barbara, UC Irvine and Fullerton for the Big West Title. Cold this be the year the Big West receives three bids into the postseason?

We said it last week (or the week before), Hank LoForte is a line drive hitting machine. After this past weekend out in New Mexico, LoForte has reached base safely in 58 consecutive games. LoForte didn’t make the fans sweat it out, reaching base with a lead off single in Sunday’s game vs. New Mexico.

Hank currently owns the longest active on-base streak in college baseball. He can extend that streak to 59 tonight when the USC Trojans visit Goodwin Field.

Kameron Guangorena and Jason Brandow are starting to gain their stride after the New Mexico series. It might have been the altitude or the wind but both had a good weekend at the plate.

Guango batted 5-for-7 in two games vs. New Mexico. Kam recorded three runs and an RBI and did not play on Friday.

Brandow played in both Saturday and Sunday games at New Mexico and batted .500 going 5-for-10 in two games. The freshman from Napa, Calif. drove in three runs and crossed the plate twice himself. Unfortunately for Brandow, if he was not making contact and putting the ball in play, he was striking out. Brandow recorded four Ks in those two games.

The Titans have four games this week to help get themselves above .500 in the win column. First up are the USC Trojans coming to Goodwin Field fresh off the Dodger Stadium College Baseball Classic. The Trojans are currently 5-9 on the season with notable wins against Arkansas and Michigan.

The weekend series welcomes James Madison University into Goodwin Field with a record of 10-5. JMU plays host mid-week to LeHigh for two games before coming to California for the three game series. The Dukes have played only three games away from home this season, getting swept by the Louisville Cardinals March 1st and 2nd.