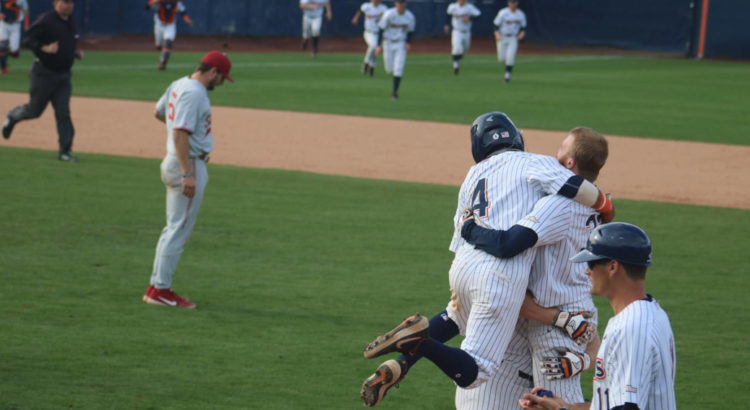 Hank LoFote is a line drive machine. Sure he has a little pop in his bat by the handful of home runs he has hit in his career at Cal State Fullerton. The most recent bomb was a solo shot in the Super Regionals against Washington. But what Hank does really well is get on base. 54 times in row dating back to last season. March of last season.

Focusing on this season, LoForte is hitting .351 (second on the team behind Sahid Valenzuela) and tied with his best friend Sahid, for a team-high seven runs. Hank’s two hits Sunday in the win over Stanford puts him on a seven game hitting streak in 2019.

The line up may change from day to day but one thing you can be sure of, Hank looks like his name will be at the top of the batting order for the remainder of the season. The dude just gets on base. 54 consecutive games with an opportunity to extend that streak tonight against Arizona State.

You knew coming into his junior year, Sahid Valenzuela was going to produce. His freshman campaign was excellent, didn’t miss a beat his sophomore year and now after a summer playing in the Cape Cod League, is living up to expectations early in his junior year at Fullerton.

Through nine games, Sahid is batting .406 with a .537 on-base percentage. In Sunday’s win over Stanford, Sahid went 3-for-4 with an RBI and two runs including the game-winner knocked in by Jairus Richards. We also mentioned he shares the team lead for runs scored with Hank LoForte, touching home plate seven times.

Look for Sahid to be in the conversation for Big West MVP if he keeps up this torrid pace.

Dropped from the polls

Pre-season rankings are more for fun than anything else. It’s always nice for the pundits to say you are highly regarded but the polls really do not mean much this early on in the season.

That said, the Titans were ranked by D1Baseball.com but after losing the Stanford series, those pundits have dropped the Titans from the rankings. No need to panic. Back in 2004, the Titans dropped completely out of the rankings in March but eventually came back to win the College World Series.

The Titans as a team this weekend fielded the ball well with no fielding errors. Titan pitchers also reduced the number of walks issued vs. Stanford than in the previous two weekend series.

Nice to see the double play duo of Sahid and Hank back at it for another season since LoForte returned for his senior season. Brett Borgogno‘s balls to first base have not made Jake Paveltich stretch too much to dig out put outs at first.

Pitching and defense has always been the mainstay of Titan Baseball and playing error-free baseball is a key to winning. Which brings us to our next takeaway…

Heading into the season, the coaching staff and fans knew Tanner Bibee would be getting the ball Friday nights. Opening the season’s first two weeks with a 0.00 ERA firmly cemented that role for the right-handed sophomore. Despite giving up four earned runs in the 7 2/3 innings pitched vs. Stanford on Friday night, Bibee’s ERA is below two. (1.74 for those curious)

The Saturday and Sunday roles are still up in the air and will need to be solidified before conference play starts the end of this month vs. UC Santa Barbara.

Timmy Josten has been throwing Saturdays and freshman Michael Knorr has been given the ball on Sundays. Despite the Titans winning all three Sunday games, Knorr has yet to record a win this season. All the late game heroics have come after Knorr was pulled and the reliever has gotten the W for the game. Knorr is averaging just under five innings per game. Five innings against Stanford was his longest and best outing to date.

We understand Knorr is a freshman and the college season is twice as long as a high school season. We understand that pushing a young and promising pitcher could cause arm problems down the line and the coaches do not want to harm his progress and potential career. As the season progresses, maybe Knorr will be able to go later in games and record a few more victories.

The Vanderbilt game was especially tough but Josten seemed to respond the following week against Fresno State recording nine strikeouts. Unfortunately, the early runs were not the way the Titans wanted to start the Fresno game. He eventually settled down to throw a much improved game.

The Stanford second double-header game started off well for Josten. The top of the first inning resulted in three ground outs. It appeared that the early inning jitters for Josten were a fluke to start the season. But the second inning proved to be otherwise with Josten surrendering hits and multiple walks. He even walked in a bases loaded run. Josten was relieved in the top of the fourth inning by Landon Anderson and ended the game with five earned runs five walks and only two strikeouts. Josten is 0-3 on the season with a 10.45 ERA.

There is only one mound and one baseball and Rick Vanderhook and Steve Rousey need to figure out the Saturday and Sunday starters in the non-conference. Keep in mind that who you think will take the ball those days in the early part of the season do not always end the season that way. Last year we all knew Colton Eastman would pitch Fridays with Andrew Quezada on Saturdays. The Sunday role was wide open and the season opened with freshman Tanner Bibee getting the ball.

As the season wore on, Eastman kept the ball on Fridays, Quezada was moved to Sundays while Tommy Wilson was the Saturday night guy. Just because guys start the season in certain roles does not mean they will end the season there. Kyle Luckham has pitched well in relief and came to campus projected as a starter. There are actually a number of talented arms in the bullpen that could start games and this non-conference schedule could help sort out those roles.

We haven’t even seen right handed freshman Joe Magrisi yet, which brings us to our next takeaway… 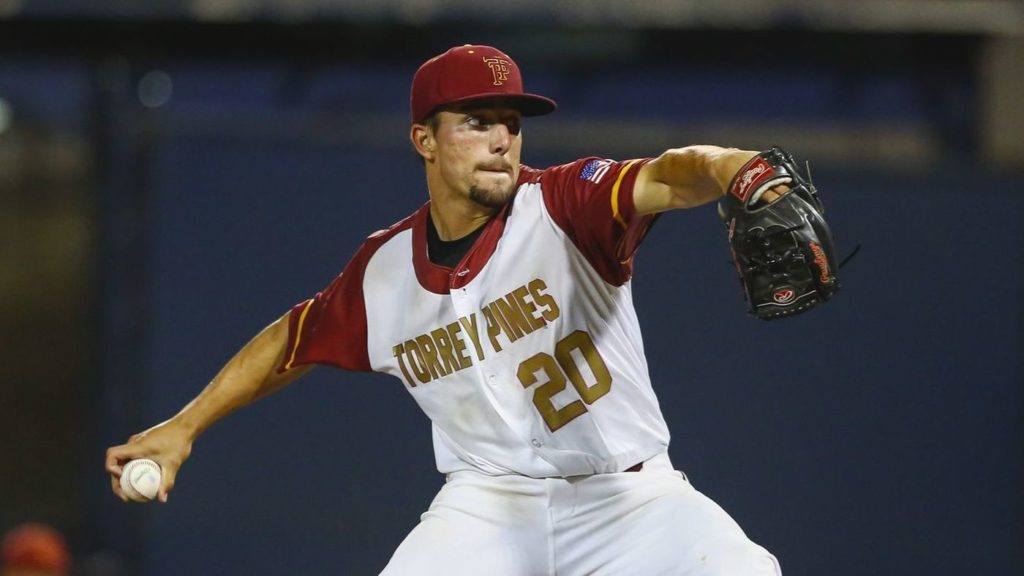 Tonight, tonight. Tonight looks to be the debut of Joe Magrisi. After nine games, it appears Joe Magrisi is ready to start facing live batters.

Magrisi is another young arm straight out of high school that the coaching staff have been handling with kid gloves. A little arm soreness during the winter break gave the coaching staff some pause but it appears Magrisi is ready to start toeing the rubber and facing college hitters.

If he gets the ball tonight vs. Arizona State, it will be trial by fire. The big three for ASU are destroying pitching while helping the Sun Devils to an undefeated start to the 2019 season. Take a look at the Sun Devil power three guys:

You want the ball kid, you got the ball. You can’t be the man until you beat the man. No better way to announce your presence with authority than to face the baddest hitters in college baseball right now.

Indy, we have an RPI problem

When it comes to college baseball postseason, seeding along with hosting potential, the NCAA selection committee uses the rating percentage index. Commonly abbreviated to RPI, it is a quantity used to rank sports teams based upon a team’s wins and losses and its strength of schedule. It is one of the sports rating systems by which NCAA basketball, baseball, softball, hockey, soccer, lacrosse and volleyball teams are ranked. The higher your RPI, the more highly regarded your team is considered.

The logic behind RPI is that if you beat a good team with a high RPI, your RPI will go up. If you lose to a team with a higher RPI, your RPI should not take that big of a hit. It also works the opposite way. Beat a lowly regarded team, your RPI does not go up that much. Lose to a lowly regarded team, your RPI takes a massive hit. RPI attempts to grade teams based on if they lost to teams they should lose to or beat the teams they were expected to beat.

The problem with Fullerton is that the remaining 2019 Titan Baseball Schedule is not chock full of high RPI teams. The exceptions include Arizona State and UCLA along with UC Irvine, all considered highly regarded and should have high RPI. New Mexico, James Madison and the rest of the Big West are not high RPI schools. Add to that, Fullerton plays Long Beach State six times, three in the non-conference and three within conference play.

The Dirtbags are now 0-10 to start the season and their remaining schedule, there is no end in sight. Michigan plays at Blair Field today and then the D-Bags open a weekend series with Minnesota. The same Minnesota team that advanced to a Super Regional last year. We even wrote an open letter to Long Beach, Dear Dirtbags, Please stop sucking, but apparently they do not have Cal State Omaha bookmarked and didn’t read it.

The Long Beach issue is that even if the Titans beat Long Beach all six times, the RPI will not increase that much. Lose to Long Beach and the Titans RPI takes a major hit. Knowing the history and tradition of the rivalry, rarely does one team dominate the other.

Because the Titans play in the Big West Conference which typically does not get much respect from the selection committee and the pundits, do not expect multiple bids into the postseason coming out of NCAA headquarters in Indianapolis on Memorial Day. The Titans will need to win the Big West, as they did last year, to ensure a postseason bid.

Winning in the non-conference is good to help increase your win totals and gain valuable experience. But the main focus should be winning the conference and removing all doubt. UC Irvine looks to be early season contender the Titans need to beat in order to win the conference. There could be some surprises coming out of Hawaii, Santa Barbara, SLO or even Northridge.

It’s painful to admit three weeks into the season, but until the RPI culture changes or the Big West improves as a whole, winning the conference will be the only sure bet on getting into a regional.

Titans are home for two games vs. Arizona State. The Tuesday game was moved up an hour and 30 minutes to try and avoid yet another rain storm. Wednesday’s game is in jeopardy if the rain decides to stick around. Then the Titans hit the road again for a series at New Mexico this weekend.