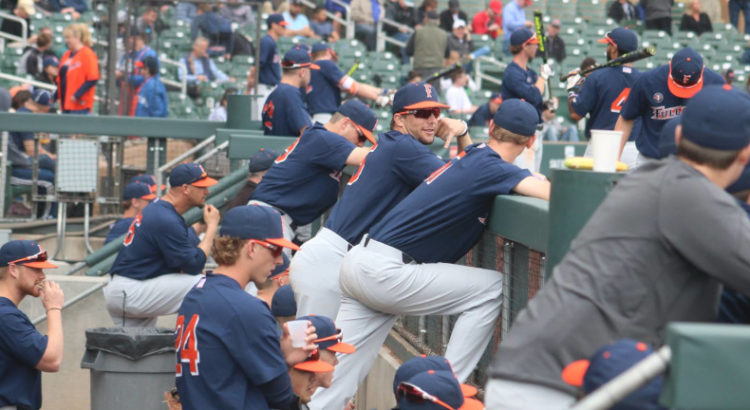 New year, new season, new feature. Here at Cal State Omaha, we will publish on Tuesdays (during the season at least) our thoughts and takeaways from the previous week in Cal State Fullerton Titan Baseball and college baseball in general.

They may be opinions but they are all mine.

Bibee took the ball in the MLB4 Tournament vs. TCU and delivered 6 innings of shutout baseball. He struck out four, surrendered six hits and issued three walks. Bibee consistently worked out of jams that included runners in scoring position to preserve the shutout and a flawless ERA.

Look for Bibee to get the ball on Friday nights for the remainder of the season if he continues to perform.

We knew the center field spot was going to stay with Mitchell Berryhill after going undrafted in 2018. The corner outfield spots have been filled by two freshmen quite admirably. The surprise of the weekend was Jackson Lyon, the freshman out of Woodbridge High in Irvine. Lyon ended his weekend hitting .400 with 2 RBI, 2 runs scored and a stolen base. Lyon’s glove was also fantastic fielding eight put outs on eight chances.

Jason Brandow introduced himself to Titan Baseball fans, and the college baseball world for that matter, with authority. Brandow, a freshman from Napa, Calif., did not take an at-bat in the TCU game but entered the Vanderbilt game scoring as a pinch runner in the 6th inning. In the top of the 7th, Brandow blasted a grand slam in his first collegiate at-bat. Brandow ended the weekend batting .500 with 6 RBI, 4 runs scored and the previously mentioned home run. His glove did not disappoint fielding 1.000 on only two put-out opportunities in the outfield.

Look for both Lyon and Brandow to make big impacts this season beyond just the opening three-game weekend.

The Titans typically rely on small ball to manufacture runs. To be honest, for the last few years, many joked the most effective Titan offensive weapons were mistakes from opponents coming in the form of walks, fielding errors and getting hit by a pitch. But the Titans in Arizona this past weekend showed they can hit this year.

In just three games, the Titans are batting .274 and slugging .411. In better news, the home runs are up after the first three games compared to last year. Last year’s home run leader Daniel Cope launched the first homer of 2019 in his first at-bat. The following day, Brandow pounded his grand slam and Jake Pavletich lifted a solo bomb against Vanderbilt. (Pav did not hit a single homer last season and slugged .332 in 256 plate appearances.)

As a team, the Titans hit only 14 home runs and a total slugging percentage of .354 in 2018. Daniel Cope accounted for over 30% of the 2018 total home runs, pounding out five round trippers. After the three-game series vs. Stanford in 2018, the Titans only had one home run in the books. That homer came courtesy of Ruben Cardenas who has moved on via the MLB draft.

Three homers in three games puts the Titans on pace to bash 50+ home runs this season as a team. Since the NCAA implemented the BBCOR bat standards in 2011, home runs as a whole have been down across college baseball compared to the pre-BBCOR era. A 50+ homer season would not even break into the top 10 in the Fullerton record books but would be a major feat since the bats were dialed back in 2011.

It’s highly unlikely to maintain that pace based on the Titans style of play but it is nice to see a mix of power and small ball return to Fullerton.

Unlike the past few years, the Titan closer role is a wide open competition. The early leaders coming out of the MLB4 tournament looks to be a two-horse race between Gavin Velasquez and Michael Weisberg.

Although Weisberg was a little shaky vs. TCU, he managed to earn the save after retiring the first two batters but gave up a hit and walked the next two Horned Frogs. He eventually got Austin Henry to fly out to Mitch Berryhill making a difficult catch in center field. Wesiberg is your typical high velocity pitcher that has a feel for off-speed stuff.

Gavin Velasquez returns after redshirting last season due to injury. Velasquez’s velocity will not light up the radar gun and his fastball was around 86-89 MPH while in Arizona. What Velasquez lacks in velocity he makes up for in his deceptiveness and ability to change speeds. Velasquez’s change-up was outstanding and his curve ball was working in both his appearances he made at the MLB4 tournament. He reminds us of another closer, Trevor Hoffman, who did not blow people people away with his fast ball but his change up was cartoon-like.

Get ’em on. Get ’em over. Get ’em in. That was the philosophy of Augie Garrido and his disciples continue to preach it daily.

Just because power bats have returned to Fullerton does not mean the gritty, grind it out, small ball mentality has vanished. In the late inning rally vs. Virginia, the rally included two walks (one intentional), one hit batter, a double steal, a sacrifice fly, two singles and capped by Jason Brandow’s double. You don’t get more small ball than that.

The only thing missing was a bunt. Those will come.

When AJ Curtis committed to Fullerton last season, most assumed first base would be his for the taking with the exit of Jake Pavletich expected. The sting of losing in the Super Regionals along with both Pav and Hank LoForte going undrafted meant the right side of the infield would return. (Sahid and Borgogno were returning to campus as a junior and sophomore respectively.) Hank and Pav coming back meant the entire infield from 2018 would return along with Daniel Cope behind the plate. Not only does this translate into an experienced infield but one with depth.

The plan moving forward is if there is an injury to an infielder (pray there are none), AJ Curtis will take over first base and everyone will move one spot to their left. So if Sahid decides to smash Hank LoForte’s nose again, Sahid would move to second base (a position he played admirably his freshman year), Borgogno moves to short, Pav moves to third and AJ Curtis comes in at first. Slide left. Slide left.

Don’t forget about Zach Lew who saw limited action at the MLB4. Lew looks to be the heir apparent to the second base position when Hank LoForte leaves.

Hopefully there will be no sliding left (nor bats to the face) this season.

The aforementioned Jackson Lyon and Jason Brandow are fantastic additions to the Titan Baseball corner outfield spots with Mitch Berryhill roaming center. The freshmen coming on quickly makes for an embarrassment of riches in the Titan outfield.

Kameron Guangorena made a surprise start in left field to open the tournament. Most were expecting Guango to start the game but rather as a Designated Hitter because his natural position is catcher. That spot is currently occupied by Daniel Cope who is expected to land on the Johnny Bench Award watch list again. Guango’s bat is too lively to not have in the line-up but starting in left field was a bit of a surprise.

Guango started the TCU game in left while AJ Curtis batted DH. Guango struggled out in Arizona mustering his first collegiate hit in the UVa game. He did get his money’s worth with an RBI double off the wall in right-center. With such a small sample size, not many Titan Baseball fans are worried about Kam’s .083 batting average. The concern may be the fielding in the outfield because he did drop a ball, committing an error in the TCU game. With more time in the outfield, Guangorena will provide additional depth to an already deep group.

Those are the three freshmen in the outfield that are trying to hold off two seniors and a mix of JUCO transfers. Had Brandow and Lyon not progressed and adjusted to the college game so quickly, seniors Jordan Hernandez and Jairus Richards were poised to take over the corner outfield spots. JC transfer Isaiah Garcia played this past weekend garnering a walk and scoring a run. AJ Curtis is also listed as an outfielder and could fill in if called upon.

The outfield is deep and look for the majority of the pinch hitters to come from this group.

We need the rain but…

The Titans’ home-opener vs. Washington was postponed and rescheduled to May 20th. Due to the uncharacteristic heavy rains that dumped inches of rain on Southern California, the field conditions at Goodwin Field were unplayable.

The Washington Huskies will pay a visit to Goodwin Field Monday, May 20th following their weekend series at UCLA.

The Titans next set of games will be played in San Diego at the Tony Gwynn Classic. Both San Diego State and University of San Diego are co-hosting the tournament which features the Aztecs and Toreros along with Cal State Fullerton, Missouri State, Utah, Fresno State, Kansas State and Oklahoma.

The Titans schedule for the weekend: