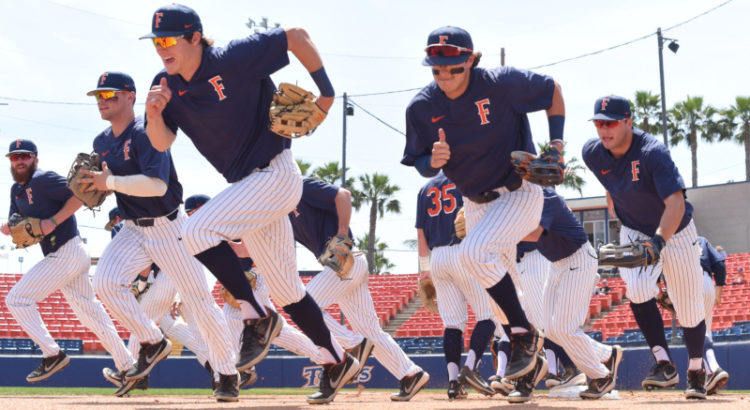 Another week in the books and the Titan baseball program is flirting with a record setting season… and not in a good way. The Titans are two games under .500 after dropping two of three at home to San Diego State and three of four with Tuesday’s loss to USC.

With an upcoming road trip to Hawaii, many Titans fans are wondering when the miraculous turn around is about to happen to make it into the postseason. A road trip to Hawaii may be the prescription that Dr. Hook needs to dial up. The Titans have a winning record away from Goodwin Field winning six of 11 road games and winning four of six games at neutral sites.

Despite the poor W/L record, Mitchell Berryhill is putting together a fantastic senior season.

Berryhill is currently batting .443 and leads the Big West Conference. Berryhill’s prolific batting ranks fourth in the nation. Those with better batting averages include:

Berryhill extended his on-base streak to 41 games, dating back to the 2018 season. Berryhill went 3-for-4 with with two RBI and one run on Sunday to extend the streak.

Three streaks likely to come to an end in 2019

More than halfway through the 2019 college baseball season and this year’s squad may snap three streaks the Titan faithful have been watching carefully. Since joining the Division 1 ranks in 1975, those streaks are:

Unless the Titans can go on another late-season winning streak, all three of those streaks could easily go by the wayside.

Twice in program history the Titans have finished the conference season with a losing record. They are in order of year, conference record, conference winning percentage and head coach:

Realistically, the Titans can only lose two, maybe three more games to maintain hopes of making a 28th postseason appearance.

The margin of error moving forward is razor thin.

Pitching and defense has been the Titan Baseball calling card for many years. Unfortunately the pitching this season has been below average and is on pace to be the worst in program history.

The bright spots for the pitchers has come from Dillon Brown and Matthew Sanchez who are the only Titan arms with ERAs lower than three. Brown’s 0.54 ERA leads the team and Sanchez’s 1.50 ERA has come in six innings of relief.

Landon Anderson has the highest ERA (9.20) and has given up 15 earned runs while only striking out 12 batters in 14.2 innings of work.

After getting a few weeks behind the plate in place of the injured Daniel Cope, Kameron Guangorena’s bat woke up on Saturday vs. San Diego State.

On Saturday night, Guango batted a perfect 4-for-4 with one walk, one RBI and plated a career-high three runs.

Now that Cope is back from his broken finger he suffered weeks ago while bunting in the James Madison game, Guango looks to get time at DH when facing right handed pitchers.

The Titan infield looked a little different this past weekend with notable players either missing or playing a different position than normal.

On Friday and Saturday, Zach Lew was playing third base while Brett Borgogno held down the short stop spot all while Sahid Valenzuela was the designated hitter. It’s the first time in recent memory that Sahid did not pick up a glove and take the field since becoming a Titan in 2017.

On Sunday, Sahid Valenzuela and Brett Borgogno looked as if they chose to switch positions for the day with Sahid at third and Borgogno holding down the No. 6 position. Sahid typically plays short stop and Bogo plays third. Both played those positions all last year.

Nice to see Zach Lew back in the line-up and it appears the coaches were using this non-conference series to help get the infielders a little more comfortable playing positions they do not normally play.

The Titans travel to Hawaii this week to take on the Rainbow Warriors for their third conference series on the year.