Cal State Fullerton boasts one of the most historic and successful baseball programs in the country with four national championships and 18 trips to the College World Series. Why else would the program receive the moniker of “Cal State Omaha”?

Obviously there have been tremendous teams of the past. The 1995 Titan squad is considered the greatest college baseball team ever assembled. Just imagine the nine-player lineup the Titans could assemble across their all-time roster.

At Cal State Omaha, we did just that, picking out players for each field position and the DH spot to craft a Fullerton Fantasy team across five decades (1975 – current).

The pitchers deserve their own blog post coming next week to include the weekend and mid-week starting rotation and bullpen.

The batting roster is based on players’ college stats and accomplishments. Titan players’ professional careers or lack thereof were not considered, just their college careers while at Fullerton. Consideration was given to their positional fits as well as a batting order that could provide a combination of a high batting average, speed and power. Here is Titan baseball’s all-time starting lineup.

No other player to have ever worn the Titans uniform embodies “Titan Baseball” than Dave Bacani. Call it small ball or “Augie Ball”, the formula of getting on base to lead off the game, stealing second or getting bunted over and then eventually coming home to jump out to a 1-0 lead has been the formula for Fullerton Baseball since Augie Garrido took over the program. David Bacani is Mr. Titan Baseball in that he did whatever it took to get on base. Bacani was hit by a pitch the most in Titan history, earning him 58 free passes along with 151 walks, No. 1 all-time in both categories. Once on base, he swiped 70 bags (6th all time) and crossed the plate 268 times (No. 1 all-time). In addition to giving up his body and wearing a few pitches, Bacani also gave of himself for the team with 29 sacrifices. Bacani was not just up there taking pitches or getting hit by them. He could also swing the stick and was good with the glove. Bacani ranks third all-time in hits (307), tied for second in doubles (63) and tied for fourth all-time in triples (11). Ranking No. 1 in fielding assists with 673 and a freshman record of 163 assists in 1998, Bacani’s glove was just as good as his bat.

Despite not winning the Golden Spikes Award, John Fishel is definitely in the conversation with Tim Wallach, Mark Kotsay and Phil Nevin as the greatest player to ever put on a Titans jersey. Fishel’s name is all over the Titan record books and ranks No. 1 all-time in six career categories. Fishel played all four years at Fullerton and ranks No. 1 in career games (295), Hits (379), At-Bats (1114), Doubles (72) and RBI (281). The record for games played and at-Bats is not only a Fullerton record but an NCAA record. Because so many good players tend to leave college after just three years to jump to the Major League Baseball Amateur draft, those games played and at-bat records may never be broken. Fishel’s 1984 season was one for the ages in that he lead the team in batting average (.378) all while coming to the plate 116 times. Fishel stole 83 bases in his career at Cal State Fullerton, third all time, and blasted 45 home runs while wearing the Fullerton F. Playing twice in Omaha, Fishel was the 1984 College World Series Most Outstanding Player. His ability to get on base, cause disruption while on base and his ability to bash balls and create offense on his own, makes Fishel the second batter in our all-time Cal State Fullerton Titan baseball line-up.

In a Cal State Fullerton career that spanned only three years, Phil Nevin left a huge mark and bats third in this all-time Cal State Fullerton Titan baseball line-up. In his junior year in 1992, Nevin had the team triple crown, leading the 1992 squad in batting average (.402), home runs (22) and RBI (86). Did we mention he also led the 1992 team with a .795 slugging percentage, 174 total bases and was walked 65 times, many of those intentional walks. Nevin’s .471 on-base percentage ranks sixth all-time and 435 total bases ranks fifth all-time. Probably the most decorated Titan baseball player in that Nevin was named the Golden Spikes Award winner, Baseball America’s Player of the Year and drafted No. 1 overall by the Houston Astros. In Omaha in 1992, Nevin batted .526 with four extra-base hits and 11 RBI and was named the College World Series Most Outstanding player despite not playing for the championship team.

When compiling this list of all-time Cal State Fullerton Titan baseball players, Mark Kotsay immediately leaps to mind. Hitting for average and power and having an absolute cannon for an arm in the outfield, Kotsay deserves to bat clean-up in this all-time Titan line-up. If David Bacani is “Mr. Augie ball”, Mark Kotsay is the “Ted Williams of Titan Baseball”. Kotsay batted .404 for his three-year career at Cal State Fullerton, the only Titan to bat over .400 for a career. His best year batting was 1995, hitting .422, collecting 111 hits and scoring 85 runs. In just three years at Cal State Fullerton, Kotsay sits at No. 2 all-time in home runs, RBI (216) and total bases (476). Project those numbers over a four year career and Kotsay would sit atop almost every offensive category imaginable. A player with that much power usually strikes out a lot too, but not Kotsay. In 1995, Kotsay’s at-bats to strike out ratio was 17 and a half to 1. Meaning every 17 to 18 at bats, Kotsay would strike out. Averaging four or five at bats a game, that projects to Kotsay striking out every fourth game. Speaking of striking out, Kotsay’s name does not appear in the top 10 list of Titans with the most strikeouts. The awards for Kotsay were impressive in that he was the Golden Spikes Award winner in 1995 and College World Series MVP.

If the stats of Nevin and Kotsay are impressive because they were achieved in three years, Tim Wallach’s stats are even more impressive because he only played two years. A junior college transfer from Saddleback College, Wallach slugged 39 homers in just two years. Had he played all four and kept that pace, Wallach would have left Fullerton with nearly 80 home runs. In 1979, Wallach not only led the Titans in RBI (102), but the entire nation. Wallach’s career slugging percentage (.729) and career batting average (.392) rank No. 2 behind Kotsay. Wallach was awarded the Golden Spikes Award and was named Sporting News College Player of the Year. Three Golden Spikes winners batting 3-4-5 in your line-up with 123 home runs combined redefines Murderers’ Row, with all apologies to the 1927 Yankees.

Normally an outfielder, Christensen secures the Designated Hitter spot based solely on his bat. With a career slash line of .348 / 42 / 174, Christensen was deadly with a bat in his hand. Playing just three years before bolting to professional baseball after getting drafted in the second round, Christensen’s 1981 season was a memorable one despite the team failing to go to Omaha. In 1981, Christensen led the team in the triple crown categories of .362 average, 23 home runs and 78 RBI. He also led the 1980 team in RBI with 69. A guy that is that clutch with runners on in front of him needs to bat sixth in the line-up because odds are, with this line-up, someone is going to be on and Christensen will bring him in.

The 2004 squad triple crown leader, Suzuki was the offensive spark plug for the Titan’s fourth national championship. Suzuki led the team in average (.413), home runs (16) and RBI (87). If that was not enough, his total hits (104) and total bases (177) also led the 2004 team. In Suzuki’s freshman and sophomore year, he did not commit an error. His .390 career batting average comes in at No. 3 all-time just behind Wallach and Kotsay. Most impressive was Suzuki’s ability to get on base, with an OBP of .491. Think about that. Every time Suzuki stepped into the batter’s box, he reached base nearly 50% of the time. Fullerton has seen a number of very good back stops but his combination of offense, fielding percentage and his ability to call a good game, Kurt Suzuki is the all-time Cal State Fullerton Titan catcher. 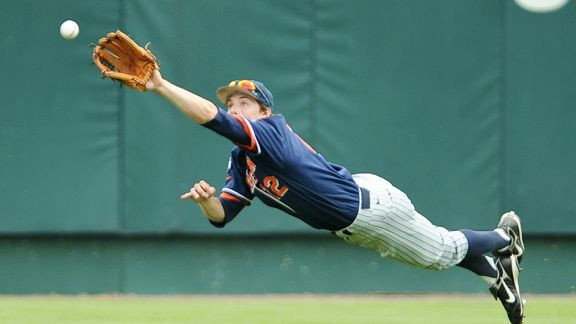 Despite having an outstanding offensive repertoire, Gary Brown was best known for his defense roaming the outfield at Goodwin Field. One of the fastest players to ever wear a Titan uniform, fly balls to the gap that would surely be a double if an average outfielder was out there died in Brown’s glove. And you can forget about tagging and trying to steal a base. Brown’s arm was just as amazing as his bat. Speaking of his bat, Brown batted .387 for his three year career at Fullerton and his 2010 batting average (.438) is still No. 1 for best average in a single season. Combining speed and power, Brown ranks No. 2 all-time in triples (17) and stolen bases (80). In true Titan fashion, Brown didn’t mind wearing a ball or two, getting hit by pitch 37 times. 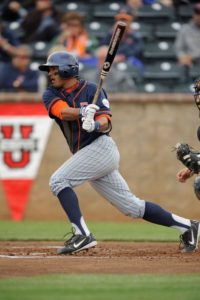 Without a good shortstop, no team can go far. Christian Colon not only had a good glove but could hit too. Colon led the 2010 squad with 17 home runs and scored 214 runs in his career. The runs scored for Colon is tops for players to only play three years. His 766 at-bats ranks eighth all-time despite not playing all four years. Colon’s 267 hits ranks 6th all-time but if you remove the players that played all four years, Colon ranks best compared to those who only played three years at Fullerton. When Colon wasn’t hitting the ball he was getting hit by it, reaching base 44 times, sixth all-time. Colon assisted 547 times on throwing a runner out, the most by any three year player. A shortstop with a career slash line of .349, / 29 / 147 batting ninth in your line-up? That’s just how good Cal State Fullerton has been through the years.

The all-time Cal State Fullerton Titan pitching staff will be revealed soon. It will include three weekend starters, a mid-week starter, a closer and two relievers. Expect a few surprises on that list.

As with any list, there are always some very deserving candidates left off. Based on our research and personal memories and experiences, this is the greatest Cal State Fullerton batting line-up to have ever taken the field. Is there a current player or future player on this year’s or future squads that could replace one of these? Time will tell.

Feel free to leave a comment and build your own all-time Cal State Fullerton Titan baseball team below.