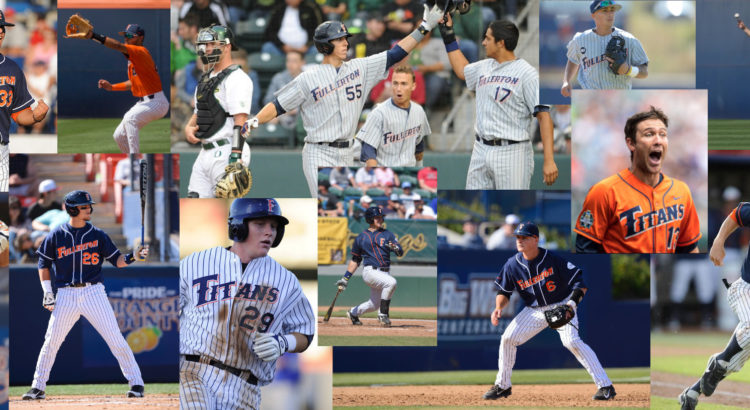 The decade will come to a close in a few days and it got us to thinking… who were the greatest players to put on a Titan Baseball uniform from 2010 to 2019. That gave us the idea to formulate the Cal State Omaha All-Decade Team.

Because Titan Baseball has always been about pitching and defense, we started with the hurlers last week.

Now it is the position players turn for formulate the Cal State Omaha fantasy team across the past 10 years.

The position players were selected based on the players’ college stats and accomplishments. Titan players’ professional careers or lack thereof were not considered, just their college careers while at Fullerton. Consideration was given to their natural fits as a position player as well as the role they played while at Fullerton. We’ll start with the guys behind the plate because that seems to be as good of a spot as any of where to start.

Nothing like leading off with the toughest position to determine who gets the nod. Not because this position was chock full of standouts but rather because the majority of the Fullerton backstops from 2010 to 2019 all had similar stats. Because we had to choose one catcher, we went with Chad Wallach.

When it comes to First Base for the Titans in the past decade, Nick Ramirez is the undisputed best to have played there. Despite his freshman year falling outside of the 10 year consideration period, his sophomore and junior seasons were plenty good to nail down 1st base.

Ramirez batted .346 as a sophomore and .285 as a junior and finished those two years with 120 RBI and 25 home runs. In the Pitchers All-Decade team, we eluded that Ramirez could also be considered for the closer position. You knew the game was in the bag when NRam traded in his 1st baseman’s glove for his pitching glove and took the mound late in games. Nick was also named to the Big West All-Conference teams following the 2010 and 2011 seasons.

Sahid came to Cal State Fullerton and was assumed he would take over the starting short stop position in 2017. Timmy Richards made a surprise decision to turn down the money after getting drafted following his junior year and returned to school. Richards was cemented at the short stop position which pushed Sahid to second and incoming JC transfer and natural second baseman, Dillon Persinger was moved to first. Sahid moved to short for his sophomore and junior seasons but his ability to play second was apparent from the moment he picked up a Fullerton glove.

As a freshman, Sahid batted .314 and had a small “sophomore slump” batting .272. Sahid’s junior year was cut short after needing Tommy John surgery midway through the 2019 season.

The embodiment of the Titan grinder, Timmy Richards locked down the short stop spot playing all four years primarily at that position. A recruiting coup to pluck Richards out of Long Beach Wilson High School, Richards was at his best when playing against the Dirtbags. Richards had a team-leading 4 hits in 10 at bats (.400) with two RBI and three runs scored at the 2017 Super Regional against Long Beach State. He hit .556 (5-for-9) with two doubles and a pair of RBI at the Stanford Regional the weekend prior.

Richards visited Omaha twice while wearing the blue and orange and in 2017, was named to the College World Series All-Tournament team despite the Titans losing both games there. Richards had surprisingly good power for a short stop and hit .309 his senior year with six home runs and 31 RBI. His junior year, Richards batted .280 and led the team with nine home runs in the 2016 season.

When you think third base for the past 10 years, Matt Chapman is the consensus choice here. A starter at the hot corner for pretty much all three years on campus, Chapman was a star in the making. As a freshman, Chapman appeared in 50 games and batted an average of .286 and had a seven-game hit streak in 2012.

Chapman’s sophomore year he started 53 games at the hot corner and batted third in the order. Chapman batted .285 during the season with 41 runs scored, 53 hits, 11 doubles, three triples, five home runs, 37 RBIs, 34 walks and six stolen bases. He boosted his batting average to .301 during Big West Conference games his second season. His junior year, Chapman started at third for another 53 games and batted a career-best .312 with six home runs and a team-high 48 RBI. Chappy turned it on at the second half of the season, batting .373 (38-for-102) with a .588 slugging percentage and a .472 on-base percentage in the last 29 games of the season.

Gary Brown is a member of the Cal State Omaha All-Time team but barely made the cut for the all-decade team because his final year performance was the only year we could consider. Thankfully for Brown, his junior year was so exemplary, he makes the all-decade team 2010-2019.

Despite having an outstanding offensive repertoire, Gary Brown was best known for his defense roaming the outfield at Goodwin Field. One of the fastest players to ever wear a Titan uniform, fly balls to the gap that would surely be a double if an average outfielder was out there, died in Brown’s glove. And you can forget about tagging and trying to steal a base. Brown’s arm was just as amazing as his bat. Speaking of his bat, Brown’s 2010 batting average (.438) is still No. 1 for best average in a single season.

Although the outfield spots are pretty much interchangeable, Center Field this past decade belongs to Michael Lorenzen.

Also, a versatile two-way athlete like Nick Ramirez, Lorenzen was considered for the closer role in our pitchers all-decade list. But as an outfielder, Lorenzen is too valuable to this team to just shove him into a bullpen and leave his bat and defense on the bench. (Hint, hint Cincinnati Reds. Are you listening?)

A starter from the word go, Lorenzen played in 164 games, compiling four shy of 600 at-bats at Cal State Fullerton. His sophomore season was his worst year at the plate, hitting.297. (If you hit just under .300 and it is considered your worst year… you’re doing something special.)

His freshman year he batted .350 and .335 his senior year. Nobody dared run on Lorenzen’s arm after he caught a fly ball. All too often a runner at third base would tag and test Lorenzen’s arm. They would soon find out why he was also the team’s closer.

When considering the outfielders, outside of Lorenzen, they all had that one great year either due to transferring from junior college, falling outside the decade or limited due to injury. Based on that criteria, Scott Hurst gets the final outfield spot based on his 2017 junior season.

Despite missing a good portion of his freshman season with a back injury, Hurst batted .250 driving in 14 runs. His sophomore season he saw increased playing time, playing in 51 games and starting 42 of them. His overall batting average dipped to .215 but did hit .306 in conference games which led to his spectacular junior season.

In 2017, Hurst started all 63 games in Center Field and posted a .328 batting average with a team-leading 12 home runs and 40 RBI. We would be remiss if we did not mention that 25% of his 2017 home runs came in a single game vs. Cal State Northridge on May 20th where he went 5-for-5. Hurst was selected to the All-Big West Conference First Team and went on to get drafted in the 3rd round by the St. Louis Cardinals.

An all around athlete, JD Davis could play anywhere on the baseball diamond.

Davis pitched as a starter and in relief, played both corner infield positions and played the outfield as well. His offense improved each year going from batting .229 his freshman year to .318 his sophomore year and finished with a .338 batting average his junior year. The Houston Astros saw enough in Davis to draft him in the third round where he quickly made it to the show within three years.

One of the purest hitters to wear a Titan uniform, Carlos Lopez redshirted his first year on campus during the 2009 season. After redshirting, C-Los was named a Freshman All-American by Collegiate Baseball and the NCBWA (second team) and played in 62 of the Titans’ 64 games in 2010. That year, Lopez had the 10th longest hitting streak in school history with a 17-gamer that lasted from Mar. 2 to Mar 28; During the streak he hit .456 (31-for-68) and drove in 12 runs.

Lopez’s sophomore season, he held team’s highest batting average most of the season, but was edged out by less than a point by Michael Lorenzen, .3425 to .3417. Lopez also had a nine-game hit streak going 16-for-36 during that stretch. As a junior, Lopez was the Titan’s most consistent hitter starting 56 games at first base. He finished his junior campaign with a .317 batting average which included an 11-game hit streak, going 21-for-45 and batting .467 during that streak.

Agree? Disagree? Think a Titan player that was considered should have been given the starting spot? Was a player totally snubbed and not even mentioned?