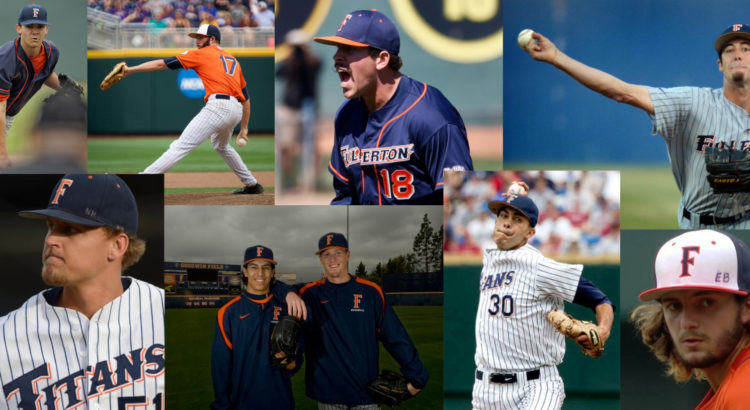 The decade will come to a close in a week and it got us to thinking… who were the greatest players to put on a Titan Baseball uniform from 2010 to 2019. That gave us the idea to formulate the Cal State Fullerton Baseball All-Decade team.

Because Titan Baseball has always been about pitching and defense, we start with the hurlers. (The position players will get their own list) We chose players for the weekend starting rotation spots along with a mid-week starter and a closer to craft a Cal State Fullerton fantasy team across the past 10 years.

The pitching rotation is based on the players’ college stats and accomplishments. Titan players’ professional careers or lack thereof were not considered, just their college careers while at Fullerton. Consideration was given to their natural fits as a starter or reliever as well as the role they played while at Fullerton. We start this list with the guy that led off the All-Time Cal State Fullerton Pitchers list.

Paint the corners. Pound the zone. Just throw strikes. Don’t let them walk. Thomas Eshelman was the embodiment of control. Eshelman was not an overpowering pitcher that blew you away with pure velocity, but had the control of a Buddhist Zen Master.

Eshelman arrived at Fullerton undrafted out of Carlsbad High School but immediately made an impact getting the starting nod on Fridays, a spot reserved for the team’s ace. Eshelman would hold onto the No. 1 role all three years while at Fullerton before getting drafted by the Houston Astros in the second round of the 2015 draft.

Eshelman’s career ERA of 1.65 ranks No. 1 all-time and opponents batted a paltry .212 against him. Eshelman’s ERA was so low because nobody got on base unless they truly earned it. His walks per nine innings is a mind blowing 0.43. As a freshman in 2013, Eshelman struck out 83 and only walked three for a 27.7:1 ratio. In that same year, his 0.23 walks per nine innings was an NCAA record and still holds today. Eshelman had a “sophomore slump” in 2014 raising his walks per nine innings to 0.58. He got it back on track his junior season bringing it back down to 0.46. Imagine a pitcher going two complete games and only issuing one walk between them. That was Thomas Eshelman.

For those that never saw Thomas Eshelman pitch might think his walks were so low because once a batter got three balls, he would plunk him and put him on base, a la Wes Roemer in the mid-2000’s. Not true. Although Roemer does have an excellent K:BB ratio, he hit 62 batters in his three year career. Eshelman’s name doesn’t appear on the top 10 list of hitting batters. Although not a power pitcher, Eshelman’s control and placement of the ball fooled a lot of batters. Esh struck out 321 batters from 2013 to 2015 in 50 starts, the most by any Titan to only pitch three years.

Coming into the 2013 season, most Titan fans assumed Graham Weist would ascend from the Sunday starting role to the Friday night spot based on experience and tenure. Two dynamic Freshmen came on campus and kept Weist on the pitching rubber on Sundays as the aforementioned Eshelman and Justin Garza took over the weekend night time spots. Garza was extraordinary before he even signed his letter of intent because he was the first player to wear No. 8 after the departure of George Horton. (Possibly a recruiting promise made by Rick Vanderhook  to Garza that he could wear No. 8 if he came to school.)

As a freshman, Garza was a perfect 12-0 starting primarily on Saturday nights. Garza started 17 games in 2013 and the Titans posted a record of 16-1 on days he took the mound. His dominance in his freshman campaign earned him the 2013 Big West Pitcher of the Year honors.

The highlight of a great sophomore season, Justin Garza walked three and tied a career-high with 12 strikeouts on May 23, 2014 as he became the fourth Cal State Fullerton pitcher to throw a no-hitter, defeating Cal State Northridge 3-0 at Goodwin Field. Garza became the first Titan since Kirk Saarloos in 2001 to throw a no-hitter. He joined Saarloos, Ted Silva (1995) and Longo Garcia (1987) in the Titans no-hit club.

Garza’s junior year finished the 2015 season with a 4-3 record and a 3.05 ERA, tallying 53 strikeouts in 65 innings of work. Unfortunately, Garza’s season was cut short after suffering a slight tear in his ulnar collateral ligament (UCL) on May 9, 2015 against UC Santa Barbara. The injury would sideline Garza, needing Tommy John surgery. Garza would not pitch in the postseason that culminated in the Titan’s 17th trip to Omaha. Despite his career at Fullerton cut short at the end, Garza easily gets the ball on Saturday nights for this All-Decade team.

Despite missing nearly his entire sophomore year with elbow tendonitis, Colton Eastman‘s freshman and junior seasons would land him on this list had he been out the entire 2017 season.

As a frosh, Eastman tied Noe Ramirez‘s Cal State Fullerton freshman record with 100 strikeouts in a single season, which also led the team. He posted an 8-3 record with a 2.24 ERA in 16 appearances and 15 starts, holding opposing batters to a .218 average. Coming out of the gates strong, Eastman was named Big West Freshman Pitcher of the Year in 2016 and made the Big West All-Conference First Team.

Eastman’s sophomore season finished strong after being brought back slowly to ensure the elbow tendonitis did not return. On a strict pitch count per start, Eastman made only nine appearances, seven of which were starts. The slow build in 2017 culminated in the postseason once Eastman was fully healthy and could take on a heavy workload. Eastman was masterful in the postseason allowing just 3 hits in 13.2 innings to earn wins in both clinching games in the Regional (vs. Stanford on June 3) and Super Regional (vs. Long Beach State on June 11).

Speaking of Long Beach State, Eastman would flip the switch when facing batters wearing black and gold. After suffering a loss in the non-conference game his freshman year, Eastman never lost to the Dirtbags in Big West Conference play or in the postseason. He rebounded on May 28, 2016 striking out nine Dirtbags en route to a 2-1 victory. In 2017, Eastman did not throw in the first Long Beach contest due to the injury and was limited in the second meeting. In Eastman’s 4 2/3rd innings of work, he gave up one hit, zero runs and struck out eight of the 16 batters he faced. Despite his surgical performance vs. the Dirtbags, Eastman was lifted over concerns of over usage and injuring his elbow again. In hind sight, saving Eastman’s arm for the postseason was the right decision.

The Titans and Dirtbags would meet for a third series in 2017, this time in the Super Regionals with a trip to Omaha on the line. In the deciding game three, Eastman was lights out again, tossing a 1-hit, 1-run gem that included another eight strikeouts. In Eastman’s junior year, after the Titans clinched the Big West Conference title the weekend prior vs. Cal State Northridge, the Long Beach series was relegated to a victory lap as they prepared for the NCAA Regionals. Eastman only pitched five innings in the Friday conference game vs. Long Beach, allowing two hits, one walk and striking out six.

Although Noe Ramirez‘s tenure on campus at Fullerton started in 2009, his majority of success came within the decade in years 2010 &d 2011.

Ramirez was the team leader in 2010 in ERA (2.54), wins (12) and K’s (119). In 2011, Ramirez was again the team ERA leader (1.69) and win leader (8). The only reason that prevented Ramirez from securing a weekend starting spot was the fact we had to disregard his freshman season accomplishments as they occurred in the previous decade.

Pitching for only three years at Cal State Fullerton before getting selected by the Houston Astros, Brett Conine made his mark and is the closer of the decade. Conine’s freshman campaign included a starting role but he was destined for the back end of the bullpen.

His 5.7 BB:K ratio (109:19) ranks fourth all time in Titan history and first for non-starters. He ranks seventh all time in saves (25) and in 2017, recorded the lowest ERA (1.39) on the team. That 2017 team included Connor Seabold, John Gavin, Tommy Wilson, Andrew Quezada, Blake Workman and Colton Eastman who all posted low ERAs that season as well.

In 2017, Conine was named to the Big West All-Conference First team and Collegiate Baseball named him third team All-American. When you heard Conine’s intro music, Linkin Park’s New Divide, you knew the game was over.

Michael Lorenzen (2011 – 2013) – Based on the raw numbers, most would argue that Michael Lorenzen is the hands down all-decade closer. The leader in saves (35), Lorenzen was dominant as soon as he would come in from center field to slam the door on the game. Have no fear, without giving away any spoilers, Lorenzen’s name will come up quite a few times when we reveal the Cal State Fullerton Titan Batters All-Decade Team.

Tyler Peitzmeier (2012 – 2015) – Having a strong bullpen starts with the closer and Tyler Peitzmeier was one of the best true closers in the decade. Pitching from 2012 – 2015, the lefty from Omaha made 98 appearances (5th all time), 17 Saves (10th all time) and tied for third for saves in a single season (17) in 2015. In 2015, Peitzmeier received 3rd team All-American honors from Collegiate Baseball and named to the Big West All-Conference 1st team.

Connor Seabold (2015 – 2017) – Ranking fourth all time and first for pitchers from the last decade in strikeouts per nine innings (9.45), Connor Seabold was cut from the mold of Titan right handed pitchers. Throw strikes and get guys out was how Seabold went about his business. If you were a Titan Baseball fan between 2015 to 2017, it was almost a sure thing you would be seeing Klondike bars flying into the stands by the seventh inning when Seabold started. (Klondike ice cream bars used to run a promotion that if the Titan pitchers struck out seven batters before the seventh inning stretch, the spirit squad would toss out ice cream bars to the fans.)

Seabold’s name decorates the Titan Baseball career leaders list including ranking ninth in career strikeouts (294) and sixth in fewest walks per nine innings (1.41). Seabold made two trips to Omaha (2015 & 2017) and finished the 2017 season leading the team in wins (11) and strikeouts (122). That 2017 season, Collegiate Baseball would name him to the All-American second team and the Big West would name him to the All-Conference first team.

Tyler Pill (2009 – 2011) – Hampered by his freshman year falling outside of the decade, Pill’s two years within the most recent decade were notable. Pill’s 5.0 strikeouts to walk ratio (242:48) ranks 10th all time and his 1.65 walks per nine innings ranks ninth in Titan baseball history. In 2011, Pill was named National College Baseball Writers Association (NCBWA) 2nd team All-American, averaging more than 10 K’s per nine innings that same year.

Dylan Floro – The only Titan to get selected in the 2012 draft, Dylan Floro’s three years on campus were all completed within the decade. As a freshman in 2010, Floro was named to the Collegiate Baseball All-Freshman team along with 2nd team NCBWA All-Freshman team.

In 2012, Floro was named 3rd team Collegiate Baseball All-American. The Big West Conference honored Floro as the Freshman Pitcher of the Year in 2010 and named 2012 Big West Pitcher of the Year. Floro’s 1.28 walks per nine innings pitched ranks fifth all-time in Titan Baseball history. During his junior year in 2012, Floro led all Titan arms in the three major pitching categories including ERA (2.83), wins (10) and strikeouts (70).