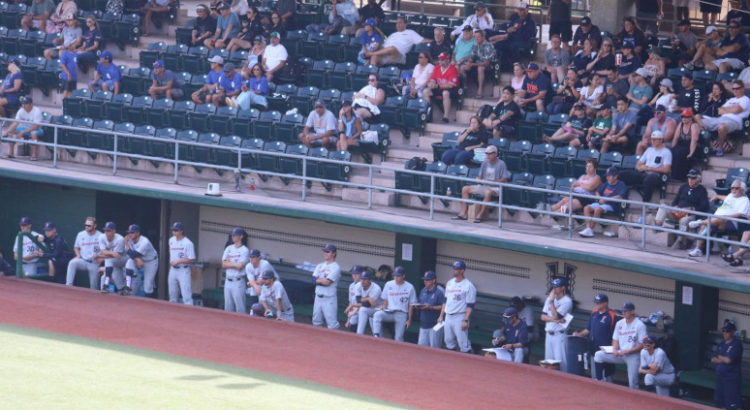 Normally we would post this under Tuesday Takeaways but traveling back from Hawai’i on Monday put us back a few days. Rather than put together a rushed Tuesday Takeaway post, we kept the alliteration title and moved it to Thursday. Plus we get to sprinkle in some thoughts and opinions coming out of the UCLA game played on Tuesday night.

Mitch Berryhill is having himself a senior year that most baseball players dream of. After drawing a walk in his first at-bat against UCLA, Berryhill’s on-base streak currently stands at 45 consecutive games, dating back to the 2018 season.

No matter where Berryhill is placed in the line-up, he keeps producing. Berryhill batted fifth vs. UCLA and second in all three games in the Hawai’i series. During the UC Santa Barbara series, Berryhill was batting in the eighth and ninth spots.

In order to keep any chances of the Titans advancing to the postseason, Berryhill’s bat will be a key ingredient.

Speaking of the postseason, the Titans are down but not technically out. In order to win the conference and assure themselves of a postseason bid, the Titans will need to put together a winning streak and get some help from teams like Cal Poly, UC Santa Barbara and Hawai’i to hit a losing streak.

The good news is that the lion’s share of the Titans’ remaining Big West schedule is against teams that are also on the bottom end of the conference standings. The only team with a better conference W/L record in front of the Titans on their schedule is UC Irvine, the Titans’ opponent this weekend. The Titans can really improve their conference rankings with a sweep of Irvine that could set up the remainder of the schedule.

The remaining schedule includes UC Davis (currently last in the Big West), UC Riverside (6th in the Big West), Long Beach State (second to last place) and Cal State Northridge (7th in the Big West). All of those teams previously mentioned have lousy RPIs and even wins against them, will drag down Fullerton’s RPI. At this point, RPI will not matter and the only chance of making the playoffs is winning the automatic bid via the conference championship.

Even if the Titans sweep the remainder of their conference games, teams in front of them will need to lose. UC Santa Barbara only has one conference loss. (Coincidentally the one loss is to Cal State Fullerton.) UCSB has Hawai’i and Cal Poly to end the season and those could pose problems if the Gauchos stumble. Santa Barbara needs to lose four or five more in conference to make this scenario remotely plausible.

The Titans are not mathematically eliminated but the window is closing quickly. As Lloyd Christmas in the movie Dumb and Dumber said, “So you’re telling me there’s a chance!”.

Titan Baseball fans have been waiting for it and they finally got it on Friday night in Hawai’i. Kameron Guangorena got his first career home run in Division 1 college baseball.

Nice to see Guango get his first bomb of his career and his recent performance hints there are more to come out of that left-handed bat of his.

You may recall we questioned after the UC Santa Barbara series if Tanner Bibee should have thrown 121 pitches. We’re at it again questioning why Bibbe threw 118 pitches on Thursday vs. Hawai’i.

In the bottom of the ninth, Bibee was brought out to finish the game after throwing over 100 pitches. When Bibee balked, advancing Daylen Calicdan into scoring position, Bibee should have been lifted. Balks are an indication of fatigue and Bibee never balks. Bibee issued two singles and was eventually lifted in favor of closer, Michael Weisberg. Weisberg came in and got the third out, getting Scotty Scott to pop out.

The concern here is that many pitches on a young arm can cause damage. Unfortunately, this past week, the news that Oregon State pitching phenom Kevin Abel will need Tommy John surgery.

If you watched the 2018 College World Series, you may remember that Abel was the young pitcher who threw a total of 247 pitches during a six-day span, including 129 pitches in a win over Arkansas.

Bibee is a strong workhorse of pitcher and we understand a young competitor wants to finish a game. This was not a perfect game or a no-hitter or even a shut out. (The shut-out was broken in the fourth inning.) Had any of those been intact, we can understand bringing Bibee back out to complete the ninth. But once Bibee approached 100 pitches, he should have been pulled. The lead was 5-1 at that point and better to save a young arm from damage than to push it for what, a complete game?

No need to jeopardize a promising young arm for a complete game in April during his sophomore year. There are bigger things on the horizon for this young man and the coaches have an obligation to not overuse a pitcher and possibly damage his future.

When the schedule was first announced, the fourth game vs. UC Irvine was scheduled to be held at the new ballpark at the Great Park in Irvine. That game has been moved to Anteater Park on the campus of UCI.

The word going around is that there is one bullpen at the Great Park field and the teams would not have the ability to warm up two pitchers at the same time. The game has been moved and we have confirmed with the UC Irvine ticketing department that the game on Thursday is at Anteater Park next Tuesday.

Questions arose when Sahid Valenzuela started playing away from his normal short stop position a few weeks ago. Sahid was even the designated hitter a few times. Now we know why.

We heard about this in Hawai’i but sat on it until it was made official. Guessing since @KendallRogers just tweeted it, it’s official. https://t.co/MPU6Ietb82

We had heard while out in Hawai’i that Sahid injured his elbow and would need Tommy John surgery. We sat on the information because we’re not one to break news that could potentially harm a student-athlete’s draft status or to give an opponent a scouting advantage. First and foremost, here at Cal State Omaha, we want nothing but success for the program and the athletes that play in it or have played in the program.

Unfortunately this is sad news for a fantastic player who has done nothing but play his heart out for the Titan Baseball program all three years he has been on campus.

Recovery from Tommy John surgery for a position player is different than that of a pitcher. Pitchers normally need a full 12 months if not longer to fully recover and start pitching again. Position players typically need six to nine months to fully recover and start making throws from the field. Corey Seager of the Los Angeles Dodgers underwent Tommy John surgery and has recovered nicely.

Because Sahid is a draft eligible junior, this begs the question does he enter the draft or return for his senior season? This injury will surely affect his draft stock negatively and he could tumble in the MLB amateur draft. Then again, Titan Baseball alumnus Justin Garza had Tommy John surgery in the spring of 2015 and was still drafted by the Cleveland Indians. Garza’s draft position did take a hit compared to where pundits had him projected but he was still drafted.

The date of the surgery is not public yet and Sahid may get a few at-bats in the DH spot so fans at Goodwin Field can say their possible last goodbyes before he enters the draft.

Titans can get their season back on track with a sweep of Irvine this weekend. We stated earlier that the Titans are not eliminated just yet but a poor showing against Irvine could be the final nail in the coffin.