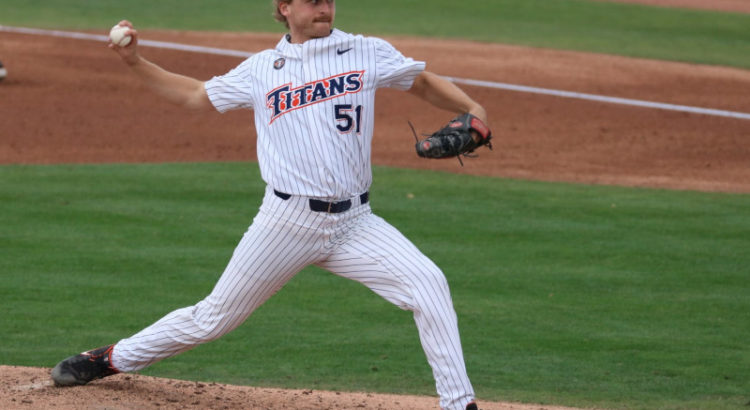 Entering the last series of the season with a losing season securely in their back pocket, the Titans traveled to Blair Field this past weekend. After promptly losing the first two games by one-run apiece, the Titans salvaged a split with the Dirtbags on Sunday behind a masterful pitching performance from Fynn Chester.

The Titans closeout the season at Goodwin Field against UC Irvine with both teams looking to establish cross-county bragging rights going into the recruiting summer season. Neither team will get a post-season bid from the NCAA selection committee and both teams will need to turn their attitude towards, ‘there’s always next year’.

Before we get into all of that, let’s take a look back at the Long Beach series that included some good, some bad and some ugly. 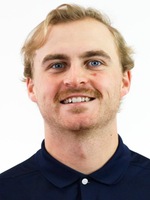 .@FynnChester talks about his complete game shutout and the Titans win over Long Beach.#TusksUp pic.twitter.com/QgtocfsmlV 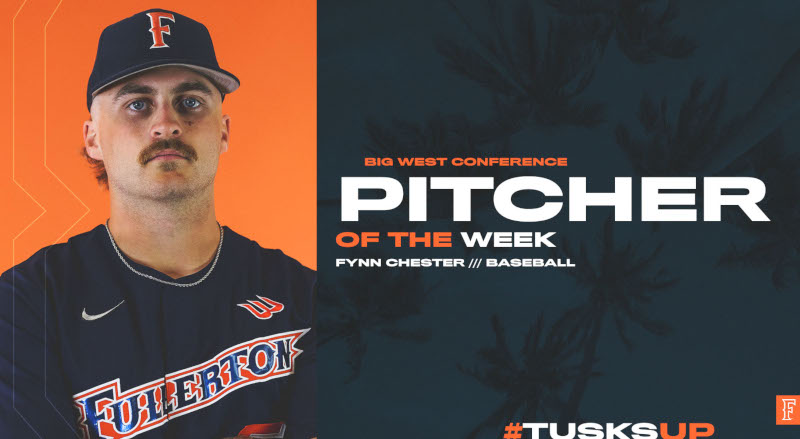 As evidenced by Fynn Chester being named the Big West Pitcher of the Week and being nominated for the Golden Spikes Performance of the Week, Fynn Chester’s three hit, zero run, zero walk, three strikeout complete game win on Sunday was definitely good.

If you were there or watching on the ESPN+ live-stream, Titan fans were witness to Chester’s masterful performance going the distance and baffling the Dirtbag hitters. The nine innings of scoreless baseball helped lower Chester’s ERA to 2.47, which leads the team.

Austin Schell entered the Long Beach State weekend hitting .415 and ranked No. 5 nationally in batting average. Schell also came into Long Beach with a 20 game on-base streak that continued to 23 games after it was all said and done on Sunday.

Schell had one hit on both Friday and Saturday but failed to get a hit on Sunday going 0-for-4. Schell did manage to get a lead off walk in the third inning on Sunday that eventually brought him around to score on Jason Bandow’s home run.

Despite the 2-for-12 outing this weekend, Schell’s .390 batting average still leads the Big West Conference heading into the final weekend vs. UC Irvine.

20 wins typically does not invoke much fanfare in college baseball but while rebuilding a sputtering program, it is a nice benchmark to achieve. Add to it that the Titans only won 20 total games last season, reaching that mark with still three games to go ensures the Titans will not finish below that 2021 mark, a program low.

Even with a sweep over UC Irvine which is not terribly likely, the best the Titans can finish would be 23-32. Still under par for what Titan Baseball fans expect but improvement from the worst season in Titan history. Even one win this weekend would be an improvement over 2021.

Averages have improved from 2021

Barring a monumental regression at the plate and on the mound in the final three games in 2022, it appear the Titans batting average and earned run averages will improve from last year.

The averages are up and that means the raw numbers must be up too. In the power column, the Titans have hit 31 home runs compared to the 22 recorded all of last season. In addition to the big bats, the Titans are running more in 2022. With three games to go, the Titans stolen base tally sits 10 above last year’s total, 35 to 25.

On the mound, the Titans finished the 2021 season with a 6.01 ERA and an even worse 6.44 ERA in Big West Conference play. In 2022, the Titans ERA heading into the final series sits at 5.33 and even better 4.49 ERA in conference. That’s the Dietrich difference that may not translate into the win/loss column immediately but shows that improvement is happening.

The 2022 arms have also cut down on the long ball, surrendering 34 homers compared to the 2021 arms who gave up 49 bombs. We highly doubt it but it’s fair to assume the Titans will not give up 15 home runs in three games this weekend.

Although the stats have not translated into more wins over last year’s total, it’s inspiring to see the improvement from 2021 to 2022.

Repetti off the Roster

In preparing for this weeks’ column, we visited the Titan Baseball website and looked at the roster. We noticed that the No. 6, Cameron Repetti, was suspiciously missing from the roster. It appears that Mr. Repetti’s career at Cal State Fullerton has come to an end with his last outing coming on Friday vs. Long Beach State. Repetti went two innings, gave up two hits, two earned runs, walked none, struck out one and gave up a home run in his final appearance as a Titan.

Repetti’s exit from the team marks the fifth player to leave before season’s end. Timmy Josten‘s name was the first to be erased from the Titan Baseball roster and was soon followed by James Wambold, Braden Spears and utility player Braden Rogers. Wambold’s name is the only Titan to appear on the D1Baseball Transfer Portal Tracker but it’s probably safe to assume that Repetti’s name will soon show up on there.

Arriving on campus in 2020 with much fanfare, accolades and optimism, Repetti came in as a two-way player. Repetti played third base and pitched his first year cut short by the COVID-19 pandemic. Last year, Repetti moved into a purely pitching role as the defacto closer and recorded five saves.

Unfortunately, we would love to tell you about his 2022 stats and career totals but since his profile has been deleted from the Titans Athletics website, it’s as if he never played this season. We’re not going to go back and hand record all of the box scores when Repetti played this season.

Repetti has two more years of eligibility and once he presumably enters the transfer portal, can offer two more years of service to another university. Much like 2021 Titans Kameron Guangorena, Michael Knorr and Kyle Luckham who have found significant roles with their new programs, Repetti should receive plenty of interest from those coaches shopping in the portal.

In the bottom of the eighth with two outs and facing Tyler Porter, Titans closer Michael Weisberg delivered a pitch that spiked into the grass infield between home plate and the mound. Weisberg fell off the mound and winced from pain apparently coming from his right arm.

Athletic trainer Justin Hoster was the first to arrive on the mound to attend to Weisberg and was quickly followed by head coach and pitching coach Jason Dietrich. Weisberg did not attempt to throw a warmup pitch which leads us to believe it may be quite serious. Ice Man took off his glove and went to the dugout with his glove in his right hand and his day was done.

We are not privy to how severe the injury might be or if it could be as serious as a UCL injury that will require surgery. We’re not in the business of speculation but whatever was causing Weisberg to leave mid-batter in pain, we hope it is not serious. 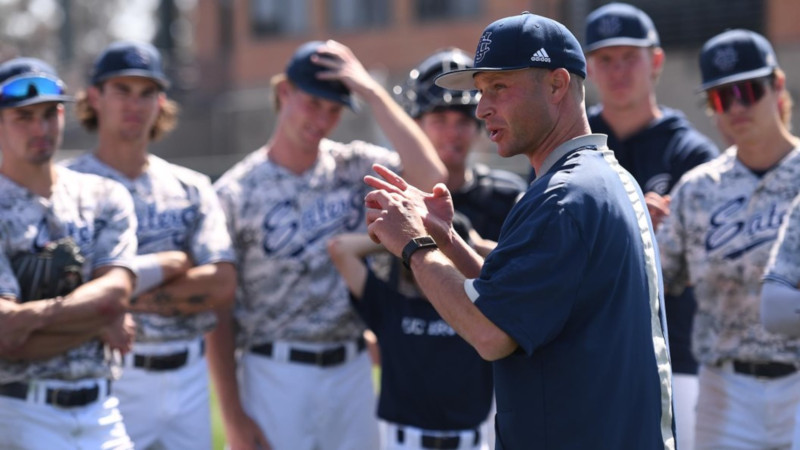 The final weekend at Goodwin Field in 2022 welcome the Anteaters from UC Irvine to close out the season. By closing the season at home, expect either Saturday or Sunday to be Senior Day. With so many players granted extra years of eligibility due to COVID, it should be interesting to see who participates in Senior day. (Whoever participates in Senior Day is a harbinger of who will be leaving due to graduation or eligibility exhaustion.)

No matter, this series marks two teams just finishing out the season with no plans of making the post-season. The Anteaters (31-22 / 15-12 Big West) enter Goodwin tied for fourth place in the Big West with Cal State Northridge. The Titans (20-32 / 12-15 Big West) enter tied for seventh in the conference with UC San Diego. Neither of these teams will be going to the postseason and their players may be more focused on their summer ball assignments than the remaining three games of the season.

The Anteaters are not exactly hot but do come in winning five out of their last seven games. They took two of three vs. Cal State Bakersfield this past weekend and strangely enough, did not sweep UC Riverside the prior weekend.

Recent history has the advantage going to the Anteaters. UCI won its first-ever home series vs. the Titans in 2021 and have won the last two series dating back to 2019. The Titans traveled to Irvine on April 5th in a non-conference game which the Anteaters won, 6-1.

On the mound, Saturday starter (who will be going on Friday since the series starts tonight) David Vizcaino holds a 1.44 ERA in 31.1 innings pitched. His 0.77 WHIP also leads the Anteaters arm corps. Nick Pinto, the normal Friday starter, is the workhorse of the UCI pitchers, starting 14 games this season and leads the team with nearly 80 innings pitched. Troy Taylor leads the team in saves with six on the year and will be called upon late if the Anteaters need to preserve a lead. Taylor has 41 Ks in 32 innings of work in 2022.