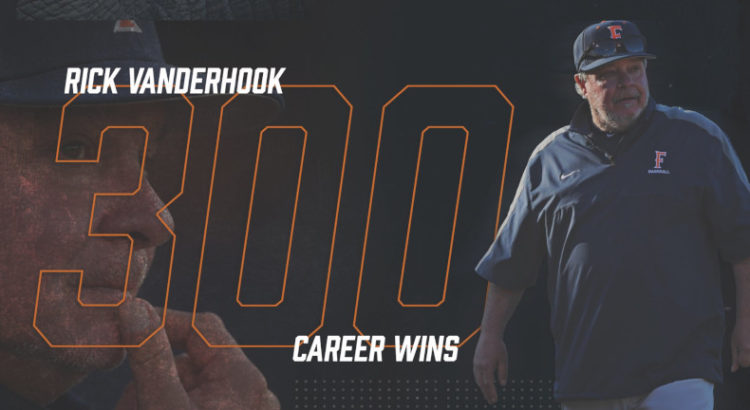 The season is underway and that means that our wrap-up series is back again. Whatever catchy alliterative name we give it, Monday Musings, Tuesday Takeaways, Wednesday Wisdom, Thursday Thoughts or Friday Foresight… you can count on us to give you a recap on the week that was in Titan Baseball. We’ll also offer some unsolicited opinions along the way.

Sticking with a pattern we developed during the fall exhibitions, we will break up the recap into three segments: The Good, The Bad and The Ugly. Hopefully there will be less bad and ugly this season because let’s face it, missing the postseason for the first time since 1991, that was pretty ugly.

Saturday’s win over Stanford, recorded Rick Vanderhook‘s 300th win as a head coach. Since taking over the helm in 2012, Hook’s 300 wins ranks him third all-time behind George Horton (490) and Augie Garrido (875).

Here’s how Hook got to the milestone 300th win.

If Hook keeps winning an average of 35+ games per season, it will take him roughly five years to surpass the legendary head coach George Horton who is second on the all-time win total list.

Titans won Friday night and Saturday afternoon to take the opening series vs. the Stanford Cardinal. The Titans outscored the Cardinal 13-2 in those first two games.

That was the first regular season series win in Palo Alto since 1994. As the saying goes, “two out of three gets you to Omaha“. We’re not packing our bags and booking plane flights yet, but always good to get a series win on the road to open the season.

Keeping things in perspective, the 2019 Titans were 2-1 after the first weekend and 3-1 after four games played. We all know how last season turned out so keeping expectations realistic while maintaining optimism at what we have seen so far can help keep Titans fans grounded.

Pitching Much Improved from 2019

We keep singing the praises of Pitching Coach Dan Ricabal but the results from the first weekend speaks volumes. The team ERA after Sunday sat at a paltry 0.67.

That’s a small sample size but pales in comparison to last year’s nearly 5 ERA. The stat lines for the pitchers who threw at Stanford:

With the exception of Bibee who is expected to leave after this season via the MLB Draft, all the above mentioned pitchers are underclassmen. For the near and foreseeable future, the pitching looks to be in very capable hands.

Bats Looked Alive on the Farm

Although the Titans are still looking for their first home run of the season, the bats looked especially good on Saturday. Recording 18 hits on Saturday, the majority of them were of the “Augie Ball” variety. Newcomer Josh Urps hit the only extra base hit, a double, on Saturday.

The 18 hits was a season high in only the second game of the season. The last time the Titans hit that many balls in fair territory came at altitude in Albuquerque on Sunday, March 10, 2019 vs. New Mexico when they recorded 21 hits.

Zach Lew came out of the starting gate red hot and hasn’t cooled off the first four games of the young 2020 season. For his performance up at Stanford, the Big West named him the Position Player of the Week.

Lew’s numbers up at Stanford were exemplary including hitting .462 in the series and contributing to six of the team total 14 runs up on the farm. On Saturday at Stanford, Lew was 4-for-6, scoring twice and driving in a run.

In the loss at San Diego State, Lew went 1-for-3 with two walks and an RBI. In four games Lew is batting .438 with an OBP of .550 . Looks like Hook has found his lead-off hitter for 2020 based on his early performances.

It’s been a while since the Titans were ranked in the Top 25 of any of the college baseball polls. After the weekend series at Stanford, Fullerton debuted at No. 24 in the D1Baseball poll.

Conversely, Stanford who was ranked 17th pre-season in the same poll, dropped to No. 25 after losing two of three against the Titans. For the remainder of the season, Titan Baseball fans should root for Stanford to have a solid season to help keep RPI numbers high.

A bit of a head scratcher to start the 2020 season, Titan Baseball fans saw that Kameron Guangorena started the weekend series vs. Stanford as an outfielder. Granted, in hindsight, JC transfer Austin Schell played well this weekend behind the plate, but putting your All-American caliber catcher in the outfield seems a bit odd. This is further cemented by the fact that last season Guango started the MLB4 Tournament playing outfield with disastrous results, dropping a fly ball that you expect a regular outfielder to catch.

On Sunday in the bottom of the sixth inning, freshman Caden Connor and Guangorena converged on a fly ball in left center with Connor making the catch. The two collided and neither were hurt but it could have been much worse. Two big bodies slamming into each other usually does not result positively.

If Hook continues to put Guangorena in the outfield, let’s work on communicating better out there. Not suggesting they bring back the old “Dipper Dan” technique but let’s keep our stud players healthy if they are going to be playing out of their natural positions.

In the bottom of the first of the mid-week SDSU game, Jackson Lyon was chasing an eventual lead-off home run and slammed into the outfield wall violently.

Athletic trainers from both teams attended to Lyon and after a short delay, he elected to stay in the game. Slated to bat ninth, when it came Lyon’s turn to bat, redshirt sophomore Max Miller pinch hit for him. (Miller ended up getting an RBI single.)

Lyon missed significant time in 2019 due to a back injury. Running full speed into walls can’t be good for a guy that has had back issues in the past. Here’s hoping he is going to be just fine and can play this Friday vs. Tulane.

Four games into the season and Sophomore Right Fielder Jason Brandow has six strikeouts, the most on the team thus far. Normally, sluggers are expected to have big strikeout numbers but those are offset by a number of home runs. Brandow has yet to hit a home run and is batting .133 with only 1 RBI. Facts are facts and Brandow’s 2020 campaign is off to a slow start.

From an observers standpoint watching games on live streams, Brandow appears to want to live up to the hype about him being a big power guy. He certainly does have the power. There is no questioning his power after he tattooed a ball in the alumni game that traveled 400+ feet and landed in the parking lot. But in the early season, it appears Brandow is going for that jaw dropping homer every time and is either missing badly or watching strike three come right across the plate for a backwards K.

The way this team is built, the timely base hit can help this team win more than the walk-off type home run. Staying back and barreling up pitches will help Brandow and the Titans in the long run. We are not the hitting coach by any means, but the early proof is in the pudding. Brandow needs to start knocking some more doubles in order to stay batting in the middle of the line-up.

Want an example of how the pitcher’s win/loss record is a horrible stat? Joe Magrisi, the electric sophomore right hander from San Diego, pitched six innings of shutout baseball on Sunday… and lost. Magrisi surrendered zero earned runs, struck out five batters and issued zero walks. Yet he still took the L.

Thanks to two fielding errors behind him and a lack of run support, taking a loss with ZERO earned runs makes this one of the ugliest things we have seen in baseball.

The good news is that even though Magrisi starts the season with a hard luck 0-1 record, he has shown why he was given the ball on the weekends. Expect him to shine this season if he can stay healthy and continue to pitch the way he did up at Stanford.

If you tried to watch the Stanford series on their live stream, it was an exercise in futility. Many Titan fans gathered at Brian’s Original Bar in Fullerton to watch the game with much anticipation for the start of the new season. That enthusiasm was soon squashed when the live stream picture was small, blurry and the camera appeared positioned somewhere in Santa Rosa.

Without commenting on the ill-prepared announcers who tripped over and mispronounced player names numerous times, the video was so bad, you couldn’t read the players’ numbers. While watching, we had to guess which player was coming to bat based on their body language or batting stance if the announcers didn’t say his name.

Sad that a private university with that much money can not put together a decent streaming broadcast. We’ve watched better live streams of summer ball clubs than Stanford produces.

Speaking of costly errors, Brett Borgogno‘s throwing errors to first from his shortstop position were not only ugly but led to runs scoring up in Stanford. The second run scored on Sunday was the winning run and was a direct result of the Borgogno error. (Bogo, you owe Magrisi an apology for him taking that loss.)

Although this will not show up in the box score, in the bottom of the sixth of Sunday game, Borgogno’s throw to first base was offline again to the point Isaiah Garcia had to apply the tag to the runner because he was pulled so far off the bag. Routine throws across the diamond should not force the first baseman to jump or stretch to make the grab.

If Borgogno remains at shortstop, Garcia and Cameron Repetti better start going to yoga classes to work on their flexibility. If not, it will be a long season chasing balls that get away from them.

What if I told you going into the SDSU game on Tuesday, I had a crystal ball and could guarantee San Diego State would commit six errors? Would you bet the mortgage the Titans would end up winning that game? You, much like the Titans, would lose.

You read that right. San Diego State committed six errors, most of them routine throws to first base that allowed Titan base runners to take additional bases. We understand that not every error will result in a run scored. But six errors and the team still loses? That’s ugly.

The Titans come home for the first time in 2020 and host the Tulane Green Wave this Friday. Keep an eye on sophomore outfielder Hudson Haskin, named to the Golden Spikes Award watch list. D1Baseball sings the praises of Haskins and he will be a formidable opponent along with the rest of his Green Wave teammates.

If the Titans can come out of the weekend with a series win or even a sweep, it will definitely help in the RPI rankings and the polls. Although the season is still early, it is never too early to start building the non-conference resume to potentially host a regional come tournament time.

The Tulane series is the first three games a five consecutive home games for the Titans. Monday brings in the Japan Federation for an exhibition game and Tuesday marks the long time return of Titan alumnus Jason Gill, now the head coach at USC.

All games are at Goodwin Field on the campus of Cal State Fullerton: