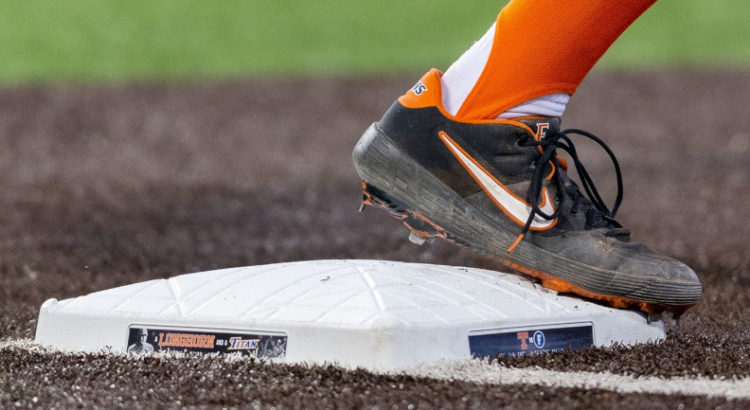 It’s official. The Big West Conference has suspended all spring sports competition indefinitely in response to COVID-19. That includes baseball and the immediate slate of weekend games scheduled vs. Xavier.

We were about to publish our Thursday Thoughts amidst all of this panic and overreaction when all of this came down. We will publish a separate blog post regarding the most recent decisions and you know we will not pull any punches regarding our opinions on all of this. But for those still with an interest in the Titans season thus far, here you go:

The Titans 4-12 record is the worst start over 16 games in recent memory. Dating all the way back to 2008, the Titans have traditionally hovered around .500 to start the season’s first 16 games. In the Vanderhook era starting with the 2012 season, the 2013 season stands out as the one that started a startling 10-0 and 13-3 in the first 16 games. That 2013 squad would eventually win 50+ games but was unfortunately bounced from the Regionals by UCLA in the Super Regionals.

The one team in recent history that came close to this slow of a start, you only have to go back two years ago to the 2018 team. That team started the season 1-7 to open up and eventually crawled their way back to 6-10 after the first 16 games. Last year’s team also started the season below .500, going 7-9 after the first 16 games. This will be the third consecutive year the Titans enter mid-March below the .500 mark.

The cliche goes, “You can’t have a comeback if you never trail”. That’s true. But we can speak with confidence for ourselves and other Titan Baseball fans that we would much rather have the boys go out and bludgeon the opposition by 10 runs. Winning early in the season puts you in a better position to host a Regional rather than sprinting to the finish with winning the Big West Conference title the only hope of getting invited to the postseason. But that appears to be the fate again this season with winning the conference the only hope of getting an NCAA Tournament bid. We sure aren’t making it easy for ourselves.

The Titans are currently on a six game losing streak after dropping the Sunday game vs. USF and losing both mid-week games to Arizona State and getting swept in Texas. Let’s take a look at what happened out in Austin that includes the good, the bad and the ugly.

He started the season off up at Stanford red hot and was named the Big West Position Player of the week. Whether he is at second base or third, Zach Lew is doing what a Titan Baseball player is expected to do. He is batting .339 with nine RBI, scored nine runs and stolen two bases.

The final stat line from Tanner Bibee‘s start in Texas on Friday can be deceiving and is not indicative of how well he pitched. 6 1/3rd innings pitched, 4 hits, 4 earned runs, 2 walks and 6 strikeouts. Hindsight is 20/20 but Bibee should have been lifted before the start of the 7th inning. He was in position to win the game with the Titans leading 1-0.

Zach Zubia led off with a single and Cam Williams grounded out to put Zubia on second. Then Bibee walked Trey Faltine which brought pitching coach Dan Ricabal out of the dugout. This should have signaled the end of Bibee’s night. When Bibee starts walking opposing batters later in innings, it is uncharacteristic and usually leads to bad results. It’s really simple. When Bibee starts issuing walks, his gas tank is low and he should be replaced. He doesn’t walk people so when he does it in later innings, that’s the signal to go get him.

But Bibee was left in and with runners on first and second, Eric Kennedy hit a 2-RBI double. Bibee remained on the mound and the next batter, pinch hitter DJ Petrinsky homered to left with Kennedy on base. Guessing the home run was the last straw and Bibee’s night was done. Freshman Evan Adolphus was brought in from the bullpen.

Despite giving up those four runs in the bottom of the seventh, Bibee started the game issuing a walk but then retired 15 Longhorns until allowing a single in the bottom of the sixth inning. A no-hitter through 5 1/3rd innings is not bad. Unfortunately Bibee was left in a bit too long and the Longhorns didn’t let the opportunity pass them by.

Titan fans, players and coaches will have to wait until Friday to see if the Titans can scratch out another win. Whether Rick Vanderhook was looking at the Farmer’s Almanac or this was just pure luck, the weather forecast in Orange County would have probably rained out any mid-week contest on the schedule.

The lack of a mid-week game will give the Titans a little bit more time in the cages to hopefully improve upon that .214 batting average.

Runners left on base is a part of baseball. No team converts all of their runners into scored runs. Before doing the research on the number of runners left on base this early season, it just seemed like an astronomical number. Then we did the math…

The Titans need to up their game when there are ducks on the pond. Which leads up to the second “bad”…

Seven Titan batters have double digit strikeouts already on the season with Josh Urps the leader with 21 punch outs. Kameron Guangorena is second with 17 and followed by Jackson Lyon (15), Isaiah Garcia (14), Brett Borgogno and Miguel Ortiz (11) and Zack Lew (10). Worse news is that every Titan that has at least three at-bats on the season, they all have a strikeout. The only player with just one strikeout? Cameron Repetti in 13 at-bats… and he is mysteriously and frequently absent from the starting line-up. 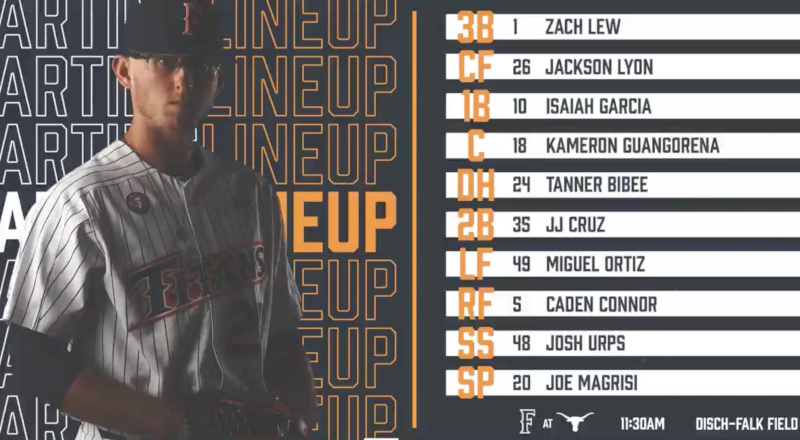 Okay, we get it. The Titans are struggling at the plate. Batters are failing to give the pitchers adequate run support. The pitchers can’t win the games all by themselves. But listing Friday night starter Tanner Bibee as the Designated Hitter on Sunday? Looks like Vanderhook is reaching into his bag of tricks to challenge and inspire his position players.


Titan fans that follow the team closely, like us, saw Bibee listed as the DH and it immediately brought back memories from March 14, 2015. You remember, the Titans were in Bloomington, Indiana playing a double header vs. Indiana. The first game ended in a 5-4 loss and Thomas Eshelman pitched eight innings and was handed the loss. Vanderhook was so frustrated with his hitters stranding seven runners from Game 1, he listed Eshelman as the DH in Game 2.

Eshelamn was listed as the No. 3 hitter in the DH spot but before he could take an at-bat, he was called back and Turner Buis hit in his place. So did listing the Friday night ace as the DH rattle the cages of the 2015 Titans and they responded is grand fashion mashing homers and destroying the Hoosiers? Nope. They lost 2-0, struck out 12 times and stranded 10 runners… three more than the previous game.

Since it worked swimmingly four years ago, why not try it again with a team struggling to get hits? Surely the current players are not old enough to recognize this technique and it will be fresh and new to them and they will respond as expected. Well, they didn’t.

Tanner Bibee was pulled back and did not take the batters box. Instead, Demitri Colacchio took over the DH role and proceeded to go 0-for-3 at the plate and stranded two runners. The game resulted in a 8-4 loss and the Titans mustered four hits and left seven on base.

Not sure if this technique in 2015 and now in 2020 was intended to challenge the position players’ mental toughness or what end result it was trying to achieve. Of course, it is a small sample size but it appears to not be working.

During Sunday’s 8-4 loss, Rick Vanderhook was interviewed by the Longhorn Network announcers from the booth. They asked three questions, the first about the type of man Augie Garrido was, noting the obvious connection between the two schools. The second question asked about the team’s offensive struggles early and Hook stated that the team is just trying to have good at-bats. He then backhanded complimented the Longhorns by saying they haven’t looked good offensively until they played the Titans. Hook added how the Titans will never be able to catch the Longhorns if they keep giving up runs before they can mount a rally.

The third question went back to the Augie connection and the announcer asked, “What do you think of this overall idea of getting the Titans and the Longhorns getting together?“. Rick Vanderhook responded with:

I think it’s a good idea. The gentleman (Augie) spent a lot of time at both institutions. He’s a legend of the game. I’m all for it.

(Longhorns head coach) Dave (Pierce) and I will talk about it after this series for the next couple of years. This is where men become men and boys become boys. Right now, we’re a little young.

We agree with the idea of the Titans and the Longhorns securing a consistent series between the two traditional powerhouses, much like Fullerton and Stanford has done for years now. But blaming the recent troubles on the youth of the team? Really?

All of the young players on the team were highly recruited and exceptional players before they landed on campus. Sure, D1 pitching is a bit more advanced than JC and high school pitching but isn’t that why you have a D1 level hitting coach? To help these young guys grow up and compete at the Division 1 level?

It’s just our opinion but since the majority of the interview was focused on Augie, Hook should have taken a page from his mentor’s playbook. Instead of blaming the youth of the team for the struggles at the plate, he should have done what Augie would have done… placing the blame squarely on himself. He is the hitting coach after all. Augie would have said he needs to work more with the guys or find a different message or even enlist the help of others. (Sergio Brown and Andy Jenkins can help with the hitters.) But to attribute the team’s offensive struggles on their youth? Come on. You’re better than that Hook.

Texas adds a run in the sixth on a solo home run. We’ll be back when something good happens. #TusksUp

We get their frustration but when you are the official Twitter account of a prominent baseball program with nearly 27,000 followers, you need to be more professional than that. Plenty of fans that do not have access to the Longhorn Network or couldn’t follow the game on the radio, rely on those Twitter updates.

Parents want to know how their kid did no matter if it was good or bad. Just throwing your hands up and refusing to update your followers because the team is struggling is no excuse. You’ve got to be better than that.

Look for a separate blog post coming later today regarding this.

Too many moving parts and too important of an issue to relegate to the bottom of a weekend wrap-up. Come back later for our thoughts and opinions on how this could affect not only Titan Baseball but college baseball as a whole. 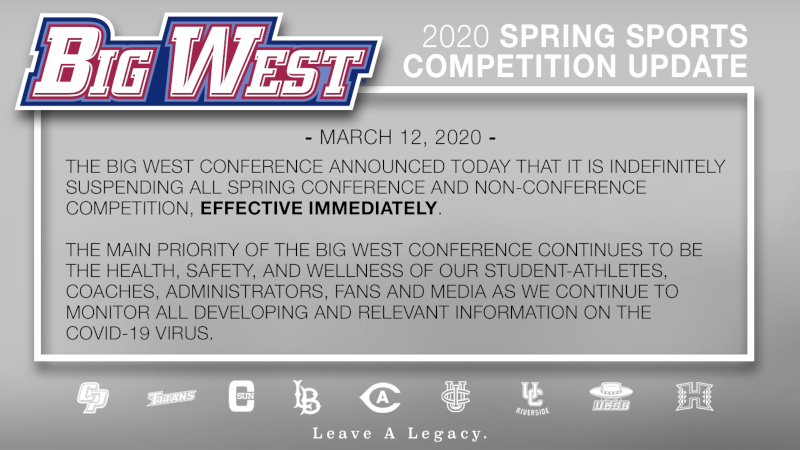 The Big West Conference has suspended all spring sports indefinitely until further notice. That, of course, includes baseball. The upcoming Xavier series is canceled and assuming the mid-week game scheduled vs. University of San Diego will be canceled as well.

The NCAA has announced it will cancel the College World Series. That’s it for college baseball this year.