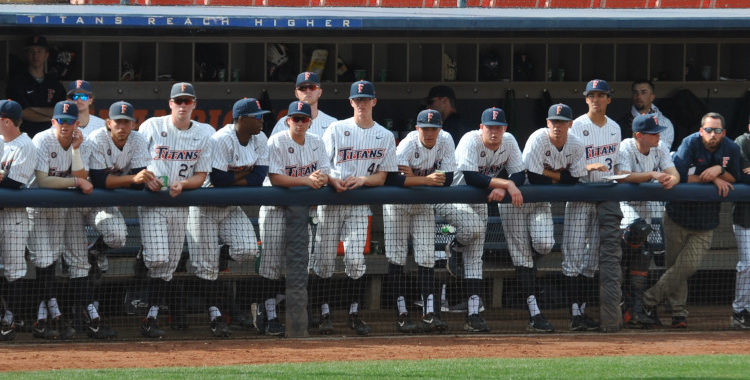 After eight games into the 2020 season (not inlcuding the exhibition game vs. Keio University), the Titans record sits at 3-5. Can anyone guess the Titans’ record in 2019 after eight games? Yup… 3-5.

Last year after eight games, many Titan Baseball fans were grumbling about the pitching and praising the hitting. In 2020, those grumbles are shifting towards the hitters and the pitchers are getting the praise. Different year but same result in the W/L column. The Titans are two games below .500.

Good thing the University of San Francisco is coming to town this weekend. With the scheduling SNAFU with Texas A&M not coming to Fullerton this weekend, the date was filled with USF. At the beginning of the season, many pointed to this weekend as an expected walk-over weekend. But much like history repeating itself, many Titan Baseball fans pointed to the James Madison series as a “get back on track” type opponent. The Titans promptly got shut out 1-0 on Friday and 2-0 on Saturday before salvaging a 12-3 win on Sunday last year vs. JMU.

Could this weekend vs. USF be indicative of the type of season we can all expect for the remainder of the 2020 season? Can’t be 100% certain but if the Titans can’t get the series win or even a sweep, Titans fans may want to prepare themselves for another long season.

We look at the good, the bad and the ugly coming out of the weekend series with Tulane and the mid-week contest with USC.

The trio of Tanner Bibee (Friday), Kyle Luckham (Saturday) and Joe Magrisi (Sunday) has been lights out. The combined ERA of those three starters is a minuscule 1.63. Surrendering a total of seven runs over 38 2/3 innings, the more impressive stat is those three starters have issued only five walks combined. The strikeouts are impressive too with all three, Bibee, Luckham and Magrisi, punching out 38 batters.

That’s it. That does it for the good.

After taking the series up at Stanford, beating the Cardinal who were ranked No. 17 at the time, many Titan fans were excited to put the failures of 2019 behind them. Many asked, “Are we this good or is Stanford that bad?“. With a few more games completed and a larger yet still small sample size, it’s safe to say Stanford is not a good team.

Stanford is 1-7 and you guessed it, their lone win came against the Titans. Since that 2-1 win that came on two unearned runs, Stanford has lost to Santa Clara, Houston, Tennessee, Texas Tech and Cal. Things don’t get any easier for Stanford this weekend taking on Grand Canyon University. GCU is 5-3 on the season and has wins over Oklahoma State, Oregon and Fordham. GCU also has on staff, pitching coach Blake Hawksworth who many Titan fans will remember, held that same position for Fullerton during the 2017 season. Need we remind you that 2017 season, the Titans advanced to Omaha.

It’s looking more and more that the Stanford series win was Fool’s Gold and as the season goes on, Stanford could end up being an RPI drain rather than a help. For the sake of the Titans and potential playoff seeding, Titan fans should root for them to win a lot more to help the RPI rankings.

The lackluster hitting was most apparent on Friday night vs. Tulane. The Green Wave starter, Braden Olthoff was sensational, pitching a complete game shut-out, issuing one walk and striking out 16 Titan batters. Honestly, Olthoff’s slider was devastating and the Titans were fooled by it all night. Sometimes a Friday night starter is going to have that night when he is unhittable but the Titan batters needed to be better that night.

The strikeouts is the most concerning. Titan batters have struck out 65 times in 282 at-bats. That’s an average of 23 percent of the time a Titan batter goes to the plate, he is going to strike out. If the Titans were hitting more for power and had five to seven home runs by now, the strikeouts would come with the territory. Titans have zero home runs on the season.

Sophomore outfielder Jason Brandow suffered an undisclosed injury on Saturday night after crashing into the visitor’s bullpen area going for a fly ball. Brandow was down for quite a while and was tended to by the trainers. He eventually was up and walking under his own power and was removed from the game before he could make a plate appearance.

Because Brandow was walking under his own power and did not exhibit any signs of a limp or something that would indicate a leg injury, we can only speculate he was removed under the concussion protocol or an upper body injury.

Brandow could have injured a hand, arm or shoulder but was not holding or favoring one of those body parts when coming to the dugout. Because the lighting is so poor in that area of Goodwin Field, it was hard to determine what part of Brandow’s body made contact back there.

In all fairness, we took the Stanford streaming broadcast team to task last time and this time it was Fullerton who had their fair of streaming issues. Granted the stream was apparently fixed mid-way through the Saturday night broadcast, it appeared as though the equipment had not been tested prior to the weekend. Mike Martinez’s microphone seemed blown out and the video would drop out every now and then.

Might we suggest streaming the alumni exhibition game as a pre-season test to make sure all the bugs are worked out. Plus, we’re sure the Titan fans would love to see some of the old alumni come back to play even if they can not be in the stands at Goodwin Field.

Yes, hindsight is 20/20 but the decision to hit for Cameron Repetti in the bottom of the fourth inning vs. USC was a head scratcher. Let’s set the stage:

The Titans were trailing 4-0 in the bottom of the fourth inning. The Trojans loaded the bases after Ethan Reed issued three consecutive walks to Austin Schell, Miguel Ortiz and Max Miller. (Isaiah Garcia opened the inning with a fly out and the Titans sat bases loaded and one out.)

Freshman Cameron Repetti is brought back to the dugout and Rick Vanderhook chooses to pinch hit Kameron Guangorena. Let’s do a side by side comparison of two players and you can decide which player is which.

Stats are updated to the point prior to this at-bat occurring in the USC game:

Did you guess that Player A was Cameron Repetti? If so, you were right. And Rick Vanderhook chose to lift Repetti and insert Guangorena in his place in the line-up in a critical spot in the game. Was it a rousing success? Uh, no.

Guango went down on strikes for his ninth strikeout on the young season. He would also strike out in his other at-bat vs. USC, bringing his K total to double digits.

What makes this decision particularly ugly is that Guangorena did not directly replace Repetti in the field but was placed at Left Field, bumping Ortiz out of the line-up as well. Who replaced Repetti at third base and Ortiz in the batting order? None other than Brett Borgogno who isn’t exactly hitting the snot out of the ball. Bogo went 0-for-3 vs. USC and is now batting .125. (At least Ortiz is hitting .200.)

We bring this up because in the top of the fifth, Guangorena made an awful error in left, allowing Ben Ramirez to reach first base. You guessed it, Ramirez eventually came around to score the unearned run when Ben Wanger hit a double. Not that the run was a difference maker but it demonstrates that Guangorena is playing out of position.

Guangorena is not an outfielder. He showed this in the first game of the 2019 season vs. TCU during the MLB4 Tournament. Granted, Austin Schell is doing a fine job behind the plate and is batting .250, which is above the team average. By playing Guangorena in the outfield is doing a disservice to the player and the team. Do you think his uncomfortableness in the field translates to how he is hitting?

On top of that, what kind of a message is Vanderhook sending to a promising freshman in Repetti? What more does the kid have to do? He’s hitting .300 with ZERO strikeouts!!! Yet he is pulled for a guy hitting below .100 and 8 Ks?

Here at Cal State Omaha, we try to be as positive yet objective at the same time. Remove the names and the pre-season accolades from the equation. Bases loaded and one out, would you pinch hit for a guy hitting .300 with 0 Ks for a guy hitting .083 with eight Ks? That’s exactly what Rick Vanderhook chose to do.

Ugly, no matter how you slice it.

Titans remain at home this weekend welcoming in San Francisco for a three game series. We touched on the importance of this series and how a sweep may get the Titans back on track and in the winning mind set. Not to mention, a sweep will bring the Titans’ record one game above .500.

After the San Francisco series, Arizona State invades Goodwin for a 2-game mid-week series. The Sun Devils have a bonafide stud in Spencer Torkelson. Torkelson’s power is unmatched in college baseball this season and his intentional walks numbers are astronomical. Here’s hoping the Titan fans get to see the Titans pitch to Torkelson and strike him out.

All games are at Goodwin Field on the campus of Cal State Fullerton: