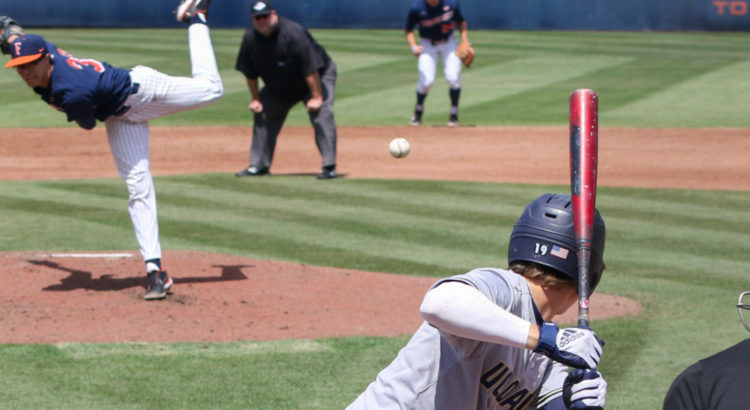 Let’s focus on this week’s thoughts coming out of the UC Davis series and the USC mid-week game that saw the Titans put together a four-game winning streak heading into this weekend with Cal State Northridge. 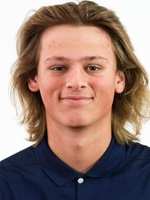 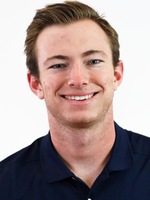 Jackson Lyon became the first Titan this season to earn Big West Player of the Week honors. His series vs. UC Davis earned him the honor after hitting .667 in the three games, going 8-for-12 with five runs, two doubles, one triple, one home run and four RBI.

The fourth-year junior slugged 1.250 with a .733 on-base percentage and three walks against zero strikeouts. Lyon’s weekend was highlighted by an opposite-field, walk-off triple in Friday night’s come-from-behind 4-3 win over the Aggies. Lyon also produced multiple hits in all three games, including a perfect 4-for-4 effort in Saturday’s finale with a walk, three runs and two RBI.

Saturday marked Lyon’s second four-hit, three-run game in the last eight (CSU Bakersfield on April 3rd). They were the first four-hit performances of his college career at Cal State Fullerton. Thursday’s contest was his first with two doubles, with his first triple and fourth home run of the year coming the following day.

Lyon improved his season batting average to a team-leading .387 following the UC Davis series. Even after the USC game on Tuesday, Lyon’s slash line of .387/.456/.595 leads the Titans and are career bests. He also leads the team with 44 hits and he and Nate Nankil share the team lead in doubles with nine apiece.

The Titans have swept two series in 2022 with the three game sweep over UC Davis the second behind the March 25-27 sweep of UC Riverside.

It should be noted that both Davis and Riverside currently reside tied for last in the Big West Conference standings with conference records of 2-13. (Apparently, the Titans are not the only ones sweeping these two bottom feeders.)

No matter if the wins come against UC Davis, UC Riverside or the league leader, UC Santa Barbara, conference wins count just the same in the W/L column than if they came against another opponent.

Four conference series in the books with still six more to go and the Titans could eke out a conference title if things fall their way.

The sweep over UC Davis this past weekend and the win over USC Tuesday marks the second time the Titans have won four consecutive games this season. The first came after sweeping UC Riverside and then a mid-week win over visiting San Jose State.

Unfortunately, the Titans have had a number of four game losing streaks this season as well. The first came losing the last game of the Stanford series and then getting swept by Gonzaga in February. The next one came when the Titans got swept by Pepperdine and then lost to UCLA on the following Tuesday in early March.

The UC Davis series broke the last four game losing streak that started with UC Irvine mid-week and then the road trip to Michigan where the Titans were promptly swept in Ann Arbor.

The good news is still that although Cal State Northridge swept UC Riverside, they did suffer a loss in the mid-week at Arizona State on Tuesday. If the Titans can win the Friday night game, it will extend the streak to the longest winning streak on the season.

Power hitting Brendan Bobo was noticeably missing from the UC Davis series after missing the Sunday game at Michigan. He may have tweaked something or strained something that needed some rest and time off. Apparently, that was what was needed because Bobo made four plate appearances in the Designated Hitter spot on Tuesday vs. USC.

Bobo showed no ill effects of whatever was ailing him by going 1-for-3, scoring a run, driving in two, earning a walk and a striking out once. Nice to see Bobo back in the line-up and the Titans could use a healthy Bobo going forward this season.

Checking in on the Titans with offensive streaks going:

The on-base streak for Zach Lew came to an end on Tuesday when he failed to reach base safely. Lew had hits in each of the three games vs. UC Davis bringing it to 26 games. Against USC, Lew did reach base on an error and would eventually come around to score. (Reaching base on an error or a fielder’s choice does not count towards an on-base streak.) Lew’s 0-for-4 night with zero walks and two strikeouts vs. USC ended up being the end to the streak.

Jackson Lyon has a small hit streak going, clocking in at six games. Prior to the USC game, Lyon had a multi-hit game streak of five games when he hit safely two or more times in those games. Lyon went 1-for-4 on Tuesday to break the multi-hit game streak but extend the hitting streak to six.

Cole Urman had an eight game hit streak going following the Michigan series but an 0-for-5 night on Thursday vs. UC Davis brought that to an end.

Last week the number stood at 10 and now sits at six. An improvement yes, but still under .500 nonetheless.

Yes, we understand that you can’t get to .500 in a single week and need to play the rest of the schedule, but the record still sits six games below. The next six games include three vs. CSUN, a mid-week vs. USD and the first two of a three games series at Hawaii. Sweep CSUN, win vs. USD and sweep Hawaii on The Rock, the Titans will be sitting one game above .500.

To further the optimism, the Titans would be above the 20 win mark which is where the Titans finished the season in 2021. To show improvement over the prior season’s record can only help the coaching staff in recruiting.

With 25 games left in the season, if the Titans go on an incredible winning streak and win the remaining games, the Titans could finish 35-20 on the season. Even the most optimistic fans would say finishing that strong is highly unlikely. But that is what is in front of this team.

The confidence gained this past week could propel them into a longer winning streak and we all know what momentum and a winning spirit can do for a college baseball team. Many say that when it comes to late in the season, the team on a hot streak is more feared than a more talented team.

Although it may not have shown up in the box score as fielding “errors”, the ill communication from the Titan Fielders this past week left something to be desired.

On Thursday in the top of the first inning, UC Davis’ second batter, Mark Wolbert, hit a ball into right-center field. Both Jackson Lyon, playing center field, and right fielder Nate Nankil crossed between the two of each other and ball bounced all the way to the outfield wall. The official box score gave Wolbert a triple when if the outfielders had not crossed each other, Wolbert could have been held to a single or a double at the very worst.

Thankfully, Thursday starting pitcher Tyler Stultz, struck out the next batter, plunked Jonah Henrickson and then induced a swinging strike out by James Williams III to end the inning and leave Wolbert stranded 90 feet way.

Forgive the poor memory and the inability to look it up in the box score, but there was another incident with fielders crossing each other and the ball bouncing into the outfield. If memory serves us correctly, JT Navyac and Jack Haley crossed each other’s paths and the bounded into left field. Apologies for not remembering which game but after seeing that, it appeared this type of fielding was becoming contagious.

Did these fielding SNAFUs end up hurting the Titans and they lost games because of it? Clearly not after gaining the sweep. But we have now gone from fielding errors to bad communication while on defense that better teams than UC Davis could have capitalized on and made the titans pay for those mistakes.

As everyone knows, Serrano announced he will retire from coaching after this season, and this looks as if this trip to Goodwin will be Dave’s last one as a coach. No matter your feelings for Serrano and the way he exited Cal State Fullerton to take the Tennessee job, he is a Titan and did help Cal State Fullerton win a lot of games and championships while coaching either as the head man or as an assistant.

Former Head Coach George Horton is helping to organize a Titan Baseball Alumni tailgate party prior to the Sunday, April 24th contest. The intent is to gather up alumni players from all eras and tailgate in Lot A prior to the game starting at about 10 am. All Titan Baseball alumni are encouraged to bring their own food and beverage. Once inside the game, the Titan Baseball alumni are encouraged to use the tented area on the third base side and to wish a fond farewell and happy retirement to coach Serrano.

Outside of what many expect to be pure shenanigans on Sunday, the Matadors still have some business to take care of while at Goodwin. CSUN comes in two games above .500 at 18-16 but 7-8 in conference. The Matadors swept UC Riverside last weekend but are coming off a mid-week loss at Arizona State. CSUN has played a number of common opponents with the Titans including: (CSUN W/L record vs. each common opponent)

On paper and based on performance against common opponents, this series could prove a make or break series for both teams. Eliminate the hoopla surrounding Serrano’s retirement and coming back to Fullerton, this series for the players and the standings will be huge.

Two Matadors are currently hitting over .300 with Andrew Sojka and Bart West hitting .362 and .342 respectively. Sojka’s batting average ranks seventh in the Big West while West ranks 10th in the conference. The power bat in the CSUN line-up includes Gabe Gonzales whose nine home runs is tied with Brock Mortenson of UCSB for the conference lead.

As you might expect with a Dave Serrano coached team, the Matador pitching staff is their strength in 2022. Although their team ERA is not eye popping, they have six arms with ERAs under four. Projected Friday starter Blaine Traxel comes in with a 4-2 record and a 3.71 ERA. His 48 strikeouts ranks ninth in the conference so far with 20 of those Ks of the backwards ilk. Closer Blake Schriver may have a high ERA (6.35) but he has five saves on the season and averages just under one strikeout per inning pitched this season.