This week’s Thursday Thoughts is all about positivity. On social media during and after the Titans 14-1 loss to UCLA on Tuesday, there was a lot of negativity. We won’t, however, gloss over the loss and not acknowledge that the UCLA game was the worst loss in recent memory. You have to go back to April 22, 2015 when the Titans lost by the same margin, 14-1, at Cal State Bakersfield during a mid-week non-conference game to find a loss so lopsided.

The positive news is that even though the 2015 Titans suffered that large of a loss, they still went on to play in the College World Series in Omaha. In both 14-1 losses, the starting pitchers were freshmen and gave up two earned runs in the game. That freshman pitcher in 2015 that started vs. CSU Baklersfield? Connor Seabold. We can all agree that Seabold went on to a rather decent career at Cal State Fullerton and is currently on the brink of making the 40-man roster for the Boston Red Sox.

See? Positivity in the face of all the negativity we’ve seen regarding the slow start to the 2021 season.

Let’s not waste anyone’s time and jump right into Thursday Thoughts coming out of the USD series and the mid-week game vs. UCLA.

Titans of the Week*

*Stats following USD series and does not include Tuesday’s UCLA game. 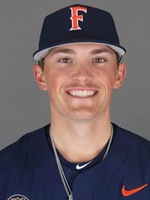 It’s no wonder why Kyle Luckham was the runaway winner of the Cal State Omaha pitcher of the week. Outside of giving up a solo hoe run to the second batter of the game, Luckham pitched an outstanding game vs. the USD Toreros.

Luckham’s ERA for the game was 1.23 which helped cut his season ERA in half from 9.00 after the Utah game. His ERA now sits at 4.38 and that could get cut in half again with the assumption Luckham will get the ball on Sunday vs. Pepperdine and has another good outing.

Luckham’s performance was even more impressive that it came on a Sunday in the heat of the day. USD’s Fowler Park plays as a hitters park when the sun is shining and the ball flies. Which leads us to the next “good”…

The Titans have four home runs on the year and they all came this weekend vs. USD. Two newcomers broke the homer drought with Jake Harvey getting the first one on Friday and then Deylan Pigford on Saturday.

Veterans Jason Brandow and Austin Schell went back-to-back on Sunday to open the second inning. In hindsight, those were the only runs the Titans would need with the way Luckham, Landon Anderson, Christian Rodriguez and Ryan Hare pitched the remainder of Sunday’s game.

By comparison to the 2020 COVID-19 shortened season, the Titans only hit two home runs last year in 16 games. The Titans have doubled that number is half the number of games.

Jason Brandow apparently put the down time in spring and summer to good use. Of the Titan hitters receiving 20+ at-bats, he’s currently leading the team in batting average (.391).

Brandow burst onto the scene as a freshman in 2019 at the MLB4 Tournament in Arizona. In his first game vs. Vanderbilt, the then No. 1 team in college baseball, Brandow uncorked a grand slam in his first at-bat. After that at-bat, the expectations were sky high for the youngster. Unfortunately expecting a guy to hit a grand slam every time he comes to the plate is unfair and unrealistic but fans saw a glimpse of the power he had at the plate.

Brandow’s slash line sits at .391/.440/.652 and apparently is dealing with breaking balls better in 2021. Curve balls seemed to be his kryptonite in years past but his early performance this season appears to demonstrate he has fixed that.

Hold on. When has giving up a home run been a “good” thing?

Giving up a bomb is never good. It’s the way Luckham responded after giving up the nuke that was most impressive.

In the past, when things didn’t go Luckham’s way, i.e., the umpire didn’t give him a pitch he thought was a strike, a fielding error behind him, etc. it crept into his head and affected his pitching. Not Sunday.

Instead, he responded by striking out the next batter, Caleb Ricketts, one of USD’s best hitters, who was 4-9 with a walk entering Sunday’s game. Luckham got a 1-2-3 inning in the second and third inning and retired eight USD batters before hitting the aforementioned Ricketts.

The box score stats can’t convey the confidence Luckham demonstrated on the mound and the TV cameras could not capture the way he held himself in the dugout. His pitching on the mound the following innings surely showed the type of player Luckham has matured into and his ability to overcome adversity.

The Return of Kam & Cam

Whatever the issue that kept Cameron Repetti out of the games vs. Utah and USD has apparently been resolved. Despite not paying in the UCLA game on Tuesday, Repetti was at Jackie Robinson Stadium and could have been inserted into the game.

Expect to see both Kam and Cam this weekend vs. USC, UCLA and Pepperdine. Could we possibly see the return of “2-way Cam” in 2021? Cameron Repetti did pitch and bat in 2020 and his versatility could be helpful in 2021, especially on the road when travel rosters are limited.

No matter how you want to slice it, 19 strikeouts is bad. The only batter to take an at-bat on Friday that did not strike out was freshman Brendan Bobo, who got a single pinch hitting for Jackson Lyon.

In the spirit of positivity, we won’t list each player and how many Ks they got. Do know that 14 Titans took an at-bat and 13 of them recorded at least one strike out.

Although Cole Urman is a sophomore academically, he is a true freshman in regards to Division 1 playing experience. Mistakes are bound to happen, especially with a young player cutting his teeth in his first few games.

Leading off in the top of the fifth inning in the Friday, February 26th game, Cole Urman hit a fly ball to right field. After it left the bat and tracking the trajectory of the ball, it appeared to be a routine “can of corn” for USD’s right fielder Tora Otsuka. That ball was anything but and Otsuka lost the ball in the sun and the ball missed his glove and hit him squarely in the face.

Urman, assuming the ball would be caught, made a slight turn at first but headed back towards the first base dugout before the ball struck Otsuka .

After hitting Otsuka’s face, the ball rolled towards center field where Camden Vasquez retrieved and threw it into the infield. The umpires immediately called time so that trainers and medical staff could attend to Otsuka.

If you have been following Titan Baseball for less than five minutes, you can assume that head coach Rick Vanderhook was none too pleased by Urman’s lack of effort to run out the fly ball. Had he run harder and not let up, Urman could have been standing on second base. The Titans undoubtedly would have had a lead-off runner on second with no outs.

In response to this, Urman was lifted from the game and replaced with speedy JC Transfer, Deylan Pigford. Omar Veloz was encouraged by Rick Vanderhook to get on his catcher’s gear and start warming up. Veloz was inserted into the game in the bottom of the fifth inning.

Since we are all about positivity in this edition of Thursday’s Thoughts, Urman’s lack of effort will probably stick with him for a long time. Assuredly Urman will run out every ground ball or pop fly from now on and it is good it happened in the fourth game of his young college career.

This reminds us of another “bad” mistake by another Cal State Fullerton catcher that eventually went on to have a decent career for the Titans; Daniel Cope.

In the second game of the conference series vs. Long Beach State in 2018, Daniel Cope made a fatal mistake that would eventually cost the Titans the game.

In the bottom of the fifth inning, a lead off walk to Brooks Stotler was followed by a Clayton Andrews fly out to give the Dirtbags a man on first with one out. The next Dirtbag up, Tristan Mercadel singled and Stotler advanced to third with one out.

Tied 0-0, then head coach Troy Buckley of the Dirtbags decided to gamble and possibly sacrifice an out in order to scratch across a run. With Steven Rivas at bat, Mercadel attempts to steal second base with Stotler on third. It was not a double steal but Stotler waited until Cope released the ball towards second base and then Stotler ran home.

Cope ended up committing an error on the play and Mercadel advanced to third base. Had Cope just held the ball and allowed Mercadel to take second uncontested, the Stotler runner would have stayed at third without scoring. The good news coming out of that play is that Cope apparently learned a lot from it and was never fooled again on the old “runners on the corners with less than two outs steal attempt” play.

Daniel Cope went on to have a good career for the Titans behind the plate and with a bat in his hand. Cope went on to get drafted in the 13th round in 2019 and is currently working his way through the Colorado Rockies minor league system. We can only hope that Urman will take his experience down in San Diego this weekend and continue to run hard and never give up on a play until it is completely over.

Not much more to say other than the Titans that took the field at Jackie Robinson Stadium looked out of sorts and overmatched.

A quick look at the box score and the Titans mustered only two hits, 1 RBI and two walks. They struck out eight times and left two runners on base.

In the field and on the mound the Titans committed three errors and the pitchers and catchers had numerous wild pitches and passed balls that resulted in UCLA runs scored. Freshman Jake Vargas went the deepest of all the pitchers, going 2 innings but gave up five earned runs, walking two and even had a balk.

Let’s hope the Titans can shake this one off easily because they will face the Bruins this weekend on Saturday.

Chalk it up to COVID-19 and the restrictions placed on sports teams in California but the annual Dodger Stadium College Baseball Classic will not be played at Dodger Stadium. Welcome to COVID college baseball.

The Titans will join USC, UCLA and Pepperdine this weekend in a round robin format with each team playing the others over three days. The Titans open the weekend up at Dedeaux Field on the campus of USC on Friday. Expect to see Tanner Bibee take the mound vs. the Trojans. Saturday the travel back to Jackie Robinson Stadium for a rematch with the Bruins on Saturday. Sunday the Titans return to Goodwin Field and welcome in the Pepperdine Waves to close out the tournament.

On Tuesday, the Titans remain at home and will complete the three game series with UCLA.