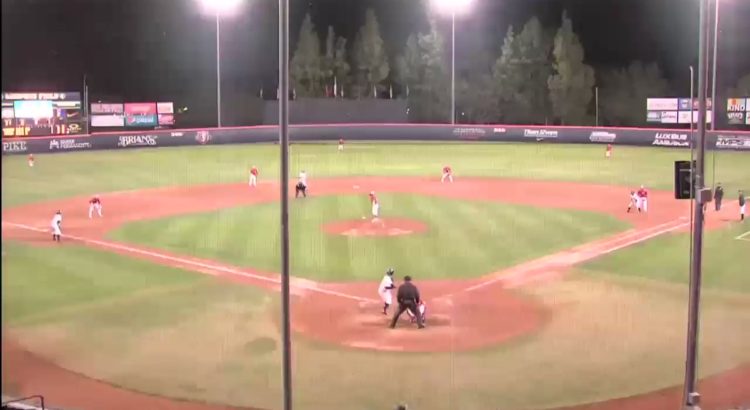 After getting swept in Palo Alto and then beaten 2-0 by Nevada-Reno at home Tuesday night, many Titan Baseball fans were hitting the panic button four games into the young season. With top 25 ranked Houston Cougars coming to Goodwin Field for a three game stretch, many Titan fans were bracing for an 0-7 start to the season.

That is until last night’s 15 inning marathon ended like this:

🔈 hear is how this morning’s walk off win sounded by our very own @TitansPBP #TusksUp pic.twitter.com/0Fic9WPsRy

Yes Virginia, you heard that right. The Titans scored on a wild pitch in the 15th inning without recording a hit in the 15th. In addition, the two runs the Titans scratched across can be attributed more to the Cougars making a mistake rather than the Titans seizing opportunities.

The first run was scored in the bottom of the eighth this way:

Not your typical “Augie Ball” of lead off hitter getting a hit, bunting him over to second, next batter singles him home to manufacture a run.

We here at Cal State Omaha try to stay positive in support of the team as much as possible but over the last few years, the offense has come more often when the other team makes a mistake rather than the Titan offense taking advantage.

Lately, Titan base runners have reached the infield via hit by pitch, walks or errors. Yes, a few hits here and there but many of the grumblings in the stands seem to wait for the opposing team to make mistakes to get runners on base. That’s not the most tried and true way to get back to Omaha.

A win is a win and we here at Cal State Omaha will take it. There are still two more games to go before Houston leaves town and with UCLA on the horizon for a mid-week tilt, things won’t get much easier. Titans travel to Tulane next weekend and then Oregon State looms right around the corner the following weekend. Things won’t get any easier traveling up to Corvalis to face the No. 2 team in the country in a rematch of last year’s opening game in the College World Series.

Keep the faith Titan Baseball fans. Rick Vanderhook put together this schedule for a reason. If you don’t face tough competition in the non-conference schedule and don’t hit the road, your team will be ill prepared for conference play. Same goes for your preparation for the post-season.

Titans face Houston at 4 pm today. The first pitch was moved up a few hours from the original 6 pm start. No matter what the reason, this will give the Titan fans an opportunity to go to the Titan Baseball game and then walk over to Titan Gym and see the Men’s Basketball team take on the dreaded Long Beach State 49ers at 7 pm.