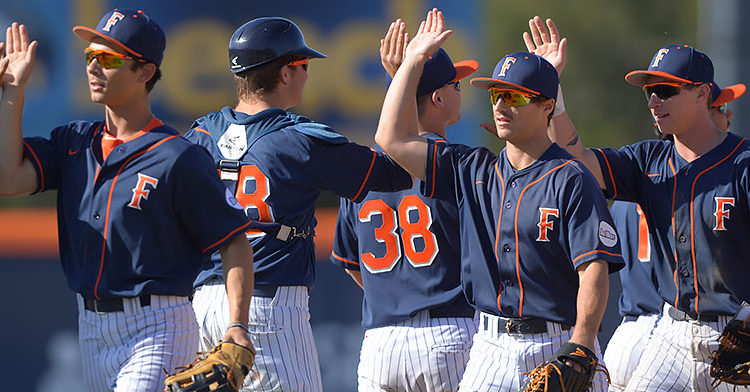 Unlike college football and basketball which typically have one to two polls, college baseball is a potpourri of polls ranging from long time newspapers Collegiate Baseball and Baseball America to online college baseball blogs like D1Baseball, Perfect Game and College Baseball Central. Every publication has their own poll but one thing remains consistent; the 2018 Titan Baseball squad is ranked in all of them.

In addition to team rankings, two Titan Baseball players, Colton Eastman and Brett Conine are being recognized in the pre-season All-America lists.

Of all the pre-season polls, the Titans are ranked the highest in Baseball America’s poll at 11. Here is a breakdown of the pre-season rankings to date for the 2018 Titan Baseball team. (The USA Coaches Pe-Season Poll has not been released yet.)

Continuing the trend of outstanding pitching at Goodwin Field, projected Saturday Night starter and Cypress College transfer Andrew Quezada joined Eastman on the D1 Baseball list of Top 100 Major League Baseball Draft Prospects. Most baseball savvy fans understand that 2018 will probably be Eastman’s last year at Fullerton because the lure of the MLB draft and his expected high draft position will entice Eastman to go pro.

If Quezada delivers as expected, you can bet anything you like that Quezada will be selected high in the MLB draft and will make the leap to pro ball. Hopefully Quezada’s “one and done” season will culminate with another trip to Omaha in June. Quezada was drafted in the 21st round by the Tampa Bay Rays but chose to honor his comittment to Fullerton.

Other Titan players expected to be drafted in 2018 in addition to Eastman, Conine and Quezada include junior outfielders Ruben Cardenas and Mitchell Berryhill. Cardenas was injured most of the 2017 season but is expected to play right field again and play at a high level.

Berryhill, a JUCO transfer from Utah is expected to play center field and bat lead off. His speed and high motor for the game make him an excellent replacement for the departed Scott Hurst, drafted by the St. Louis Cardinals in 2017.

Relief pitcher Blake Workman is expected to get drafted but could return for his senior season in 2019 if the closer role is vacated by Conine and his draft position is not to his liking. Junior infielders Hank LoForte (2B) and Jake Pavletich (1B) could get drafted within the top 20 rounds if their 2018 performances project as expected.