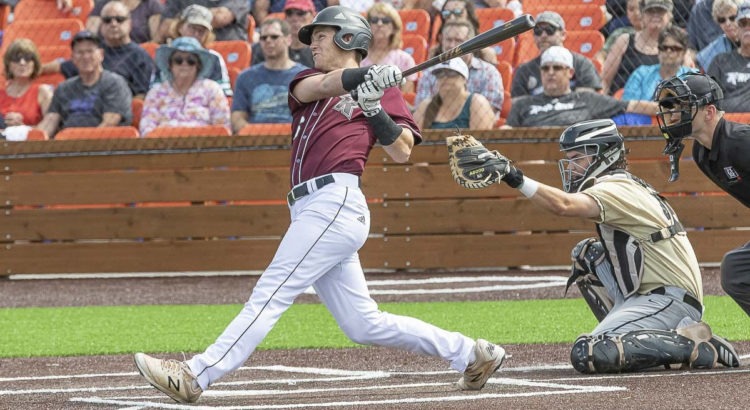 Summer is coming to a close and the Cal State Fullerton campus will soon be buzzing with activity again as fall semester begins later this month. Although many Cal State Fullerton students may have spent the summer at the beach or working summer jobs to help pay for tuition, Titan Baseball players were playing Collegiate Summer Baseball all over the country.

No matter where they played, the Titan players expected to return and incoming transfers and freshmen received instruction and valuable at-bats and innings pitched to better hone and refine their respective game.

We watched the Titan Baseball players closely throughout the summer and if you follow Cal State Omaha on Twitter, you probably caught a few updates on a number of the players in summer ball. We have compiled the stats of the Titan players that participated in summer ball in 2019 and those stats are below.

Understand that some summer leagues have longer schedules than others. Also, some players will not play the full summer season due to injury, innings limits or the coaches request they return to work out on campus after a limited summer ball experience. Some players joined their summer ball teams late after completing summer school courses. There are a number of factors that contribute to a player participating in a lot or a few games during the summer.

Cape Cod League – Warham Gatemen
Kameron Guangorena: C – .250 AVG – 12 G – 44 AB – 6 R – 11 H – 7 1B – 3 2B – 0 3B – 1 HR – 7 RBI – 3 BB – 1 HBP – 9 Ks
Guango started the Cape Cod League season on the opening day roster. Anytime a player that just finished his freshman season plays in the Cape Cod League, that bodes well for his future draft stock. Despite leaving early and not completing the season for the Wareham Gateman, Kam put up some respectable numbers in the league most everyone agrees is the top level for collegiate summer baseball. Expect to see Guangorena open the season as the main catcher for the majority of Titan Baseball games in 2020.

California Collegiate League – Santa Barbara Foresters
Brett Borgogno: INF – .125 AVG – 3 G – 8 AB – 2 R – – 1 H – 1 1B – 0 2B – 0 3B – 0 HR – 0 RBI – 3 BB – 0 HBP – 5 Ks
Borgogno was limited this summer after experiencing an injury that is not expected to affect his ability to participate in fall and spring workouts. The common opinion regarding Borgogno’s role in 2020 is to compete for the second base position vacated by graduating senior Hank LoForte.

Southern California Collegiate Baseball League – Inland Valley Pirates
Demitri Colacchio†: INF – .324 AVG – 20 G – 71 AB – 8 R – 23 H – 20 1B – 2 2B – 0 3B – 1 HR – 8 RBI – 8 BB 1 HBP – 16 Ks
Colacchio tranfers into the Fullerton program via Saddleback College and prior to his stint at JC, played for the University of Utah. A strong summer showing in the SCCBL places Colacchio in a good position to compete for the starting short stop spot in the spring.

West Coast League – Ridgefield Raptors
Cameron Repetti*: INF/RHP – .248 AVG – 50 G – 202 AB – 31 R – 50 H – 32 1B – 12 2B – 1 3B – 5 HR – 33 RBI – 28 BB – 1 HBP – 46 Ks
Repetti did not miss a beat making the transition from high school to college competition. Facing college pitchers, Repetti held his own in the West Coast League playing for the first year Ridgefield Raptors. A dual threat, Repetti also pitched over the summer racking up a 3-3 W/L record to accompany six saves. Repetti struck out 24 while only issuing eight walks and finished with a 3.81 ERA. Despite pitching over the summer, Repetti expects to play in the field and pick up a bat once on the Fullerton campus. Over 200 at-bats over the summer will help prepare Repetti to compete for the starting third base job for the Titans in 2020.

Independant – Utah Marshalls
J.J. Cruz*: SS – Stats unavailable
Unfortunately, the Utah Marshalls do not make stats available without a registered and paid account through iScore. Despite not seeing how Cruz performed over the summer, his high school performance puts him as the odds on favorite to win the short stop position vacated by Sahid Valenzuela who left via the MLB draft.

Independant – Utah Marshalls
Miguel Ortiz*: OF – Stats unavailable
No stats on Ortiz but expect him to get every opportunity to win an outfield spot once fall work outs start.

Cape Cod League – Yarmouth-Dennis Red Sox
Michael Weisberg: RHP – 10.63 ERA – 11 G 0 GS – 0 CG – 11.0 IP – 16 H – 14 R – 13 ER – 6 BB – 11 Ks – 0 W – 0 L – 0 SV
Weisburg, much like Guangorena, played in the Cape Cod League after his freshman season. Maintaining the reliever role while out in the Cape, his ERA was a bit higher than one would want. We are unaware that while out in the Cape, Weisburg may have been trying to learn new pitches or gain more control. (Summer ball is the exact time for a player to experiment with a different aspect of their game because the games are purely exhibitions.) Look for Weisberg to hold down the closer role in 2020 but could be challenged for that spot if his control and ability to throw strikes remains suspect.

West Coast League – Yakima Valley Pippins
Joe Magrisi: RHP – 2.59 ERA – 8 G – 6 GS – 0 CG – 34.2 IP – 21 H – 10 R – 10 ER – 12 BB – 66 Ks – 2 W – 1 L – 1 SV
Magrisi had a freshman season to forget while at Fullerton but figured it out while playing for the Yakima Pippins this summer. Magrisi struck out 5.5 batters for every walk issued while playing the in the WCL. Magrisi even picked up a bat during the summer to the point he participated in the WCL home run derby. Expect Magrisi to return to campus looking to compete for a weekend starting role on the mound after his excellent summer up in Yakima.

New England Collegiate Baseball League – Newport Gulls
Dillon Brown: RHP – 2.97 ERA – 10 G – 5 GS – 0 CG – 33.1 IP – 30 H – 17 R – 11 ER – 8 BB – 15 Ks – 3 W – 0 L – 2 SV
Brown returns to Fullerton for his senior year and finished the summer ball season with a sub-3 ERA. Over the years at Fullerton, Brown has primarily played the middle reliever role admirably but did get some starts while playing for the Newport Gulls in the New England Collegiate Baseball League. Combining starts with relief appearances, Brown had a perfect 3-0 W/L record while recording two saves. Brown projects to return to his same role as the veteran leader of the bullpen and to put out fires in the middle innings.

Independant – Puf Caps
Gavin Kennedy*: RHP – 1.82 ERA – 7 G – 3 GS – 0 CG – 24.2 IP – 21 H – 7 R – 5 ER – 7 BB – 25 Ks – 0 W – 0 L – 0 SV
Right handed pitcher Gavin Kennedy is already drawing comparisons to Connor Seabold who also pitched for the Puf Caps in the summer of 2014 coming out of high school. High praise for an incoming freshman seeing how Seabold was drafted in the third round and has advanced to Double-A in his second full season of professional baseball. Kennedy arrives on the Fullerton campus putting up fantastic numbers this summer. Anytime a pitcher records a sub-2 ERA in summer ball, he will be given every opportunity to earn a spot on the roster and gain valuable playing time.