Joe DiMaggio’s 56-game hitting streak. The Boston Celtics winning eight straight NBA titles from 1959-1966. Brett Favre started 297 NFL games from 1992-2010. These are all examples of sports streaks that did finally come to an end.

The Cal State Fullerton baseball team streak of 26 consecutive NCAA Regional appearances is in jeopardy of coming to an end. At the current pace, the 2018 Titans could establish something no other Titan Baseball team has accomplished; the first losing season since the program began playing Division 1 baseball in 1975.

(Editor’s note: The regional streak is 26 years and dates back to 1991. The streak for winning records and 30 win seasons is 43 years dating back to when Cal State Fullerton started competing at the Division 1 level in 1975. When first published, we erroneously stated that the streak of Regional appearances was 39 years. We regret the error.)

It all comes down to conference play, which opens Thursday, March 29, 2018 at UC Santa Barbara. Win the Big West Conference and the Titans extend their streak of making the post-season to 27 years. Place second or lower, kiss that post-season streak goodbye.

Don’t think for a second that the committee will take pity on Fullerton and give them an at-large bid based on the Titan “brand name”. It was just last season that the University of Miami’s 44-year postseason streak came to an uneventful end.

The last bracket unveiling, when Miami knew it was over. pic.twitter.com/oX4G1DQ77x

With Miami being left out, Florida State moved up to No. 1 with a 40 year streak of making the NCAA baseball postseason. Florida State currently sits at 20-6 and looks poised to extend their streak to 41 years.

Sadly, unless the Titans win the Big West, they could be facing the same Memorial Day disappointment as the Hurricanes did last year as the Regional brackets were announced.

When the Titans opened the season at Stanford and were swept by the Cardinal, many Titan Baseball fans were nervous about an ominous start. Granted the series was on the road against a strong, nationally ranked opponent. The Titans poll rankings took a hit as you might expect but did not tumble out of the major polls.

Then came the 2-0 loss at home to Nevada on February 20th. Of the few Titan fans that braved the cold to watch the team tumble to a 0-4 record, many exited Goodwin Field with no words to explain what they just witnessed. This is not what Titan fans were expecting in 2018; a year after going to the College World Series in Omaha.

Of the nine batters that picked up a stick in Omaha, six of the nine left the team by way of graduation or the MLB draft. Two-thirds of the starting pitching rotation was gone via the draft as well. Yes, the 2018 Titan Baseball squad would be young with a number of new faces on the 2018 squad but Titan Baseball fans were not expecting this.

The sentiment and the culture surrounding Titan Baseball is that it does not rebuild, it reloads. For being a “small school” with a small athletic budget by comparison, the yearly expectations are sky high.

Unfortunately with the way the non-conference season has gone in 2018, the Titans will need to win the Big West Conference title to keep the consecutive NCAA Regional appearances streak alive.

The NCAA Regional field of 64 chooses the champions from each eligible conference to get an automatic bid into the tournament. The Big West is not considered to be a “Power Five” conference like the SEC, ACC, Big 12, Big 10 and Pac 12 mainly because of lower revenue generating athletic program due to lack of Division 1 football programs. In men’s basketball, the Big West is a one team conference when it comes to an invite to the NCAA Men’s Basketball Tournament. (Cal State Fullerton was this year’s lone representative, receiving a 15 seed and promptly getting destroyed by Purdue in the first round of March Madness.)

Sadly, this appears to be a down year for the Big West across the board and destined to send just the champion to the tournament. 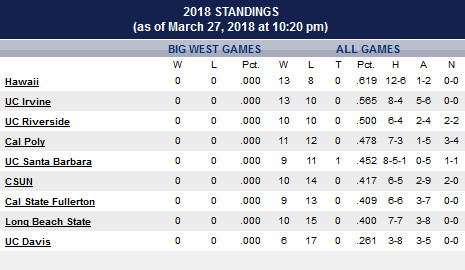 Although there is more than two months to go before Regionals are announced, Baseball America released their Projected Field of 64. Sadly, this projection only has one Big West team (Long Beach State) making the post-season by virtue of their prediction the Dirtbags will win the Big West. Baseball America projects the Dirtbags as a fourth seed in the Hattiesburg Regional. Normally smaller schools that can’t earn an at-large bid but get an invite being the conference winner are saddled with a No. 4 seed.

Knowing the task at hand and the uphill battle ahead of them, the Titans have their charge. It’s win the Big West Conference or go down as the team that broke the streak. Sitting at a 9-13 W/L record and a .409 winning percentage, the Titans need to focus on ensuring they are not remembered as being the first Titan Baseball team to secure a losing record.

Hopefully there is a leader in the Titan Clubhouse that can deliver the Jake Taylor speech from the movie Major League.

Straight forward and simple. Win the conference and remove all doubt and anxiety of needing the selection committee to select you into the post-season. The charge to win the conference starts tomorrow. Hopefully this 2018 squad has it in them to avoid breaking the streak.