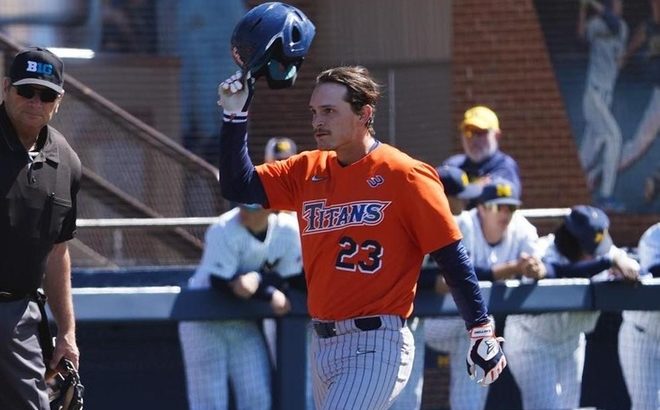 Thursday Thoughts has moved to Wednesday, and we are calling the post-Michigan column Wednesday Wisdom. Due to the UC Davis series starting on Thursday, we thought getting the column out a day sooner would be a better choice.

Without a mid-week non-conference game to consider, this edition will focus on the weekend prior in Ann Arbor, Michigan where the Titans unfortunately got swept by the Wolverines. As we do on Thursdays but this week it’s Wednesday, we’ll look at the good, the bad and the ugly coming out of this weekend with Michigan.

No poll this week for the #CalStateOmaha Pitcher of the Week.

(No other Titan pitcher that threw significant innings vs. Michigan had an ERA below 6.) pic.twitter.com/FPmrz0AXRA 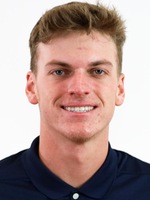 In looking at Tyler Stultz’s stats over the past three Friday starts, they are nearly identical.

Stultz is going deep into games at 7+ innings and has given up a total of four earned runs in 21.2 innings. His ERA over the past three starts sits at 1.66. Stultz was the victim of poor run support vs. Michigan and then vs. Bakersfield his after he left the game let him down. Both of his performances could have easily been wins had the bats and the bullpen upheld their end of the bargain.

Stultz should get the start on Thursday when the UC Davis Aggies come south for the Thursday – Saturday weekend series before the Easter Holiday.

Yes, Cole Urman is the Cal State Omaha Batter of the Week, but his performance has steadily increased over the past few weeks. Offensively, Urman started the season a little slow, but he has really come on as of late. Defensively, we all can see what a difference he makes behind the plate. His presence back there blocking balls and the threat of his throwing ability to cut down would be base stealers is something that does not show up in the box scores.

Urman is hitting just .218 but that started to pick up when UC Riverside came to town. Since the Riverside series, Urman has gone 12-for-38 and batting .316. He currently enjoys a seven game hitting streak that started on Friday up in Bakersfield.

If memory serves us correctly, it was right around this time of year last season when Urman’s bat changed his swing a tiny bit and started hitting the ball better. Hopefully he has found something else that can translate into continuing to hit better.

Checking in on the Titans with offensive streaks going:

Zach Lew extended his on-base streak by another three games, bringing the streak to 23 games when he has reached base safely. Lew had multi-hit games on Friday and Saturday vs. Michigan going 2-for-4 both nights. His streak almost came to an end on Sunday when he went 0-for-4 on the day but was hit by a pitch in the fourth inning.

Lew will try to extend the on-base streak to 24 starting tomorrow when the Titans host UC Davis at Goodwin Field.

Jack Haley had a nice weekend in Ann Arbor getting hits in all three games vs. Michigan to extend his on-base streak to 13. Dating back to the San Jose State game, Haley has hit safely in eight straight games.

We mentioned earlier that Cole Urman has an eight game hit streak going following the Michigan series. Urman should see lots of playing time vs. UC Davis and plenty of opportunities to extend that streak.

After dropping all three games at Michigan, the Titans record sits at 10-20. With 10 games remaining in April, the Titans will need to win the rest of those games including sweeping weekend series vs UC Davis and Cal State Northridge, winning both mid-week games vs. USC and University of San Diego and winning the Friday and Saturday games at Hawai’i to end the month. The Titans will need to go on an epic winning streak just to get to even in the win/loss column.

All (realistic) Titan Baseball fans can agree that going to the post-season or winning 30 games in the first year under a new head coach and staff was a bit too optimistic. Finishing with a .500 or better record was more realistic considering the team finished below .500 in 2021.

Although finishing above .500 with 25 games left on the schedule is not impossible, it will be an uphill task. To put it in perspective, the Titans will need to win 18 games and only lose seven in order to finish one game above .500. A tall task indeed considering the team is currently 10-20.

Looking ahead, the Titans play the next eight games upcoming at home at Goodwin Field. The road has been an abject disaster for the Titans, going 3-13 in road contests. The Titans enjoy a 7-7 record at Goodwin, clearly helped by hosting Loyola Marymount and UC Riverside to earn five of those seven wins.

Could the Titans go on a win streak starting with UC Davis this weekend? It’s not impossible seeing how UC Davis is currently tied with UC Riverside for the bottom of the Big West Conference standings. We all can remember how the Titans dominated the Highlanders back on March 25-27 so why not do the same to the Aggies this weekend?

Following this weekend’s series with Davis, the Titans bring in USC who is very beatable. The following weekend series brings in Coach Dave Serrano and the Cal State Northridge Matadors who currently hold down ninth place in the Big West standings.

There are definitely some confidence building opponents directly in front of the Titans before they face the gauntlet of at Hawai’i, at UC San Diego, home to Cal Poly, on the road at Long Beach State and then finishing at home with UC Irvine.

“Unfortunately, Christian has sustained an injury that will keep him out the rest of the season.”

That is the official word from the Cal State Fullerton Sports Information office regarding Right-handed pitcher Christian Rodriguez when we asked why he did not pitch in the Michigan series.

Those Titan Baseball fans that follow the program closely should have noticed that Christian Rodriguez was noticeably missing from the starting rotation out at Michigan. Last week, we predicted that Tyler Stultz would start on Friday, C-Rod on Saturday and Evan Yates on Sunday. Yates moved into Saturday and Peyton Jones took the Sunday start.

In digging through the box scores, Rodriguez’s name did not appear, even in a relief role. That caused some concern because Rodriguez missing a weekend start could mean a number of things, none of them good.

Our minds immediately leaped to the worst case scenario in that it could be a season ending or possibly career ending injury. With a pitcher like C-Rod who throws in the mid-90’s, one immediately thinks a UCL injury that would require Tommy John Surgery. Less catastrophic thoughts included a minor injury like elbow soreness that would require him to rest it and then get eased slowly back into the rotation. (Think Colton Eastman in 2017 when he suffered from elbow soreness and the coaching staff brought him back slowly on a strict pitch count.)

Other reasons why he would miss a start included ineligibility due to grades or possibly a violation of team rules. We don’t know C-Rod all that well personally, but he does not seem to be the type of guy who would let his grades slip or would violate team rules that he would get suspended. That had us fearing the worst again.

We reached out to the Athletic Department seeking answers and the quote from above is what returned. No other details were provided because frankly, no other information was needed.

Whatever the injury sustained, we hope it is not career ending because this season, Rodriguez showed why he was considered a threat to not make it to campus because the MLB would snatch him up in the draft. After a rocky freshman campaign, C-Rod earned a weekend spot starting on Sundays and quickly moved into the Saturday role in 2022.

Rodriguez will end the 2022 season with a 1-3 record in seven starts. Prior to the Michigan series, Rodriguez led the team in strikeouts (38) and his season will end with a 4.19 ERA.

Goodwin Field will be a welcome sight to Titan players coaches and fans this weekend as they welcome in the UC Davis Aggies for a three game Big West Conference series starting on Thursday. The Aggies have a 3-17 and recently beat the University of Pacific on Tuesday 14-11.

UC Davis, traditionally not a powerhouse in the Big West or Division 1 Baseball for that matter, are reeling a bit more than normal. Prior to the season, an investigation revealed the UCD baseball team hazed new members to the team with “dangerously excessive drinking and other inappropriate activities,” which led to the resignation of head baseball coach Matt Vaughn. The team did not take part in Fall practices and the Aggies currently reside tied for last with UC Riverside at the bottom of the Big West Conference standings.

Despite the troubles and the poor record, individually the Aggies have four position players currently batting over .300. Mark Wolbert leads the team in batting average, (.368) on-base percentage (.449) and slugging percentage (.574). James Williams III is batting .317 and leads the Aggies in walks. Titan pitchers should note not to pitch Nick Iverson inside because he is not only batting .309 but he has reached base six times this season after getting hit by a pitch. Nick Leehey is the power threat on the team hitting .308 but has hit four home runs on the season.

On the mound, UC Davis carries an 8.24 team ERA which is slightly better than the UC Riverside team ERA of 8.88 when they visited Goodwin Field. If the pitching for the Aggies slightly resembles the pitching from UCR, the Titans batters should have a nice weekend.

Attempting to predict a weekend rotation for the Aggies has proven to be a confusing endeavor. The last six weekend series games for the Aggies, they have employed six different starting pitchers. Whether that has more to do with injuries or not truly have an established rotation, three UCD arms have pitched 20+ innings.

Bryan Green has pitched the most with 41 innings pitched on the season, but he looks as though he primarily starts on mid-week games and comes out of the bullpen on the weekends. Green’s 4.39 ERA is the best of the Aggies arms that throw a lot. Nate Freeman could see some time on the mound this weekend and brings a 5.23 ERA to Goodwin Field. Kaden Riccomini has thrown 28.2 innings with a 0-4 record and 7.85 ERA.