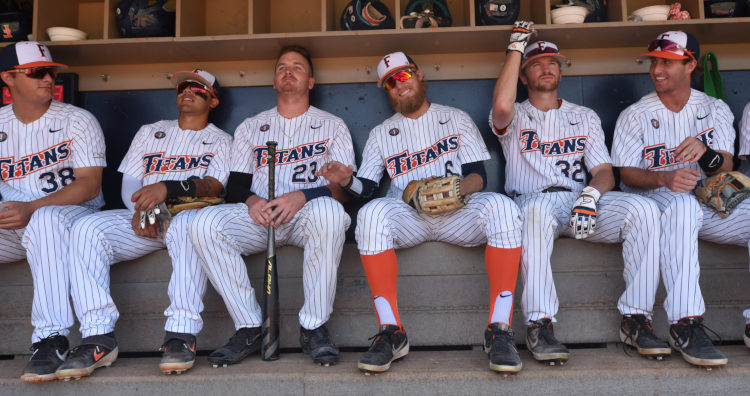 In honor of the Kentucky Derby this past weekend, Titan Baseball is in the homestretch to Memorial Day. Unfortunately, barring a miracle winning streak and a monumental collapse by UC Santa Barbara or Cal Poly, the Titans will be staying home for the NCAA Postseason tournament for the first time in 27 years. It is looking almost certain all of the Titan players expected to return to the squad next season will be able to report to their respective collegiate summer baseball teams on time.

After this weekend’s series with UC Davis and the mid-week game with Grand Canyon University last night which replaced the rained-out Arizona State game, here are some thoughts and opinions on Titan Baseball.

Unfortunately Berryhill’s bat cooled off a tad and went 3-for-13 (.231) vs. Davis, dropping his season average to .426. After the weekend hosting UC Davis, Berryhill sits fourth in national batting average.

After last night’s win over Grand Canyon University, Berryhill raised his average a point, going 1-for-2 on Tuesday. Even if Berryhill does not end the season as the NCAA batting leader, if his average is .438 or higher, he will tie or surpass Gary Brown as the single season team leader in batting average. Quite an accomplishment considering Gary Brown was named to the Cal State Omaha All-Time Team (Batters).

Keep an eye on how Berryhill finishes the three final weekend series vs. UC Riverside, Long Beach State and Cal State Northridge. There is a possibility one more game could be added to the Titan Baseball schedule which leads us to our next point…

It is well documented that the Titan Baseball program since turning Division 1, has never won less than 30 games in a season. With the Titans sitting at 20-24 with nine games to go, achieving 30 wins is impossible. But wait, not entirely impossible…

The University of Washington game that was rescheduled to May 20th has been canceled. That leaves the Titans with 53 games, one less than the original 54 scheduled at the beginning of the season. That is unless the Titans can find a dance partner for that final non-conference mid-week game.

During the mid-week game vs. UC Irvine, Daniel Cope was allowed to call the pitches without getting the signs from the dugout. Now that Cope is injured and Kameron Guangorena appears to be the backstop for the remainder of the season, many figured being a freshman, Guango would be looking to the dugout for pitch signs.

That was not the case last night vs. Grand Canyon. Guangorena was calling his own game with a combination of pitchers starting with Landon Anderson, Michael Knorr, Titus Groeneweg and Joe Magrisi finishing the game. Titan pitchers faced 35 batters and threw a total of 142 pitches, 90 of those pitches for strikes.

Giving the catcher, especially a promising young catcher like Gunagorena, the ability to call his own game is immensely helpful. This not only gains confidence and report with the pitchers but also allows the pitchers to work the pace they feel most comfortable within. Joe Magrisi is a fast worker and once he gets the ball back, is ready for the sign and rocks and fires.

In addition to the synergistic relationship inherent among battery mates, this also helps prepare a catcher for when he moves on beyond the Titan Baseball program. Guangorena and Daniel Cope have futures playing professional baseball. Might as well prepare them the best they can so they are that much more advanced when they arrive in the minors.

With the season almost assuredly ending prior to Memorial Day, it is time to start working on next year. In a lost season, no time like the present to start preparing for the future.

With all due respect to the seniors and the older guys on the team, it is time to give the young guys more at-bats and time in the field. After all, they are going to be the future of Titan Baseball. We would suggest the following starting line-up for the remaining games.

Pitchers would not change much seeing how the current staff is so young as it is. Getting more young arms out there like Evan Larsen, Jimmy Endersby, Magrisi and Titus Groeneweg will help these guys develop. Keep throwing Tanner Bibee and Timmy Josten, Knorr and Kyle Luckham on the weekends but mix in the young arms and get them facing live bats.

Apologies to Jake Pavletich but he is not getting drafted and is more of a first baseman. He is more comfortable playing with a base to his left than his right. Zach Lew is an upgrade and needs the time in the field and facing live pitching.

AJ Curtis should get more time at first base. Due to his limited time playing this year thanks to a hand injury, he will most likely not get drafted despite being a draft eligible junior. Unless the MLB teams draft him based on his JUCO stats and potential he showed before coming to Fullerton, Curtis looks like he will return for a senior season.

LoForte should stay at second because frankly, with Sahid Valenzuela out, the Titans really do not have any other option there. Lew could play second (like he did after LoForte was lifted vs. Grand Canyon) but that would leave Pav back at third or Zach Weller. Weller is a junior and is solid defensively but his anemic .067 bat would come to the plate three to four times a game if he were to play third. Plus, doubtful Weller will be on the squad next year. Weller could find himself in a similar situation as underperforming juniors Tristen Hildebrandt and JT McClelland found themselves not making the team again despite having eligibility remaining.

Berryhill would stay in center because he is producing and competing for the national batting title. There is a very good chance he ends the season batting over .400 and would join an elite group of Titans to bat over .400 for a season, the likes of Mark Kotsay (twice), Sam Favata, Gary Brown, Kurt Suzuki, Phil Nevin, etc. For the sake of his draft status, Berryhill should stay in the line-up and let the scouts get a little more exposure to him.

Additional apologies to the JUCO outfield guys Jordy Hernandez, Isaiah Garcia, Jeff Pellegrino and Jairus Richards, but they are not the future of this team. Lyon and Brandow will be roaming the outfield for a few more years and it is time to get them more live action. Depending on the extent of Lyon’s back injury and his ability to play regularly, the platoon of Garcia, Richards and Hernandez could fill in nicely.

Now that Trevor Cadd took the entire year to redshirt and get healthy, it could be a three way battle for who gets the center field spot next year. Three additional outfielders are committed to come to Fullerton next year that could generate a little more competition but they are unknowns as of right now.

Rebounding next season with a more experienced squad is more important than a 30 win season or even finishing above .500. If 2019 is a rebuilding year, might as well not squander the opportunity to get the young guys seasoned to get out of the gate fast next year.

Another weekend conference series and another opportunity to get closer to the .500 mark. Even with a sweep at UC Riverside this weekend, the Titans would be one game under .500 with six more games to go.

If you are planning to go to the Friday night game and plan on taking the 91 East freeway, you may want to start driving now…