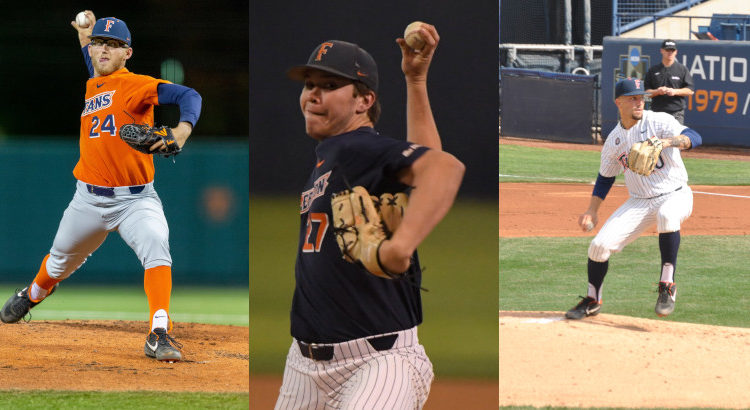 UPDATE: Joey Magrisi has transferred to Palomar Community College and has committed to play at UC Riverside should he not get drafted in 2021.

The Major League Baseball draft has come and gone. The first few days of the Non-Drafted Free Agent signing period has passed. For the first time in 45 years, zero Titans were drafted.

Although the streak of 45 players drafted would have been nice to maintain, this bodes well for the improvement of the 2021 Titan Baseball roster. By virtue of this tweet from Friday night starter Tanner Bibee the day after the MLB draft completed, it’s safe to assume the entire 2020 weekend starting rotation returns to campus.

Let’s get to work @FullertonBSB

Let’s take a closer look at all three weekend arms looking deeper into the metrics beyond wins/losses and ERA. All three had four game appearances and all of those were starts, Bibee Fridays, Luckham Saturdays and Magrisi on Sundays. (Blue = leader. Orange = 2nd best)

At a glance, Tanner Bibee was the clear cut ace of the staff either leading or ranking No. 2 in all categories. Both Luckham and Magrisi were first or second in four categories with Luckham getting the slight edge leading two categories.

Bottom line, with Tanner Bibee not leaving campus to play professional baseball, the Titans weekend rotation looks to be in good hands. Keep in mind, returning pitchers Timmy Josten, Michael Knorr, Peyton Jones, Evan Adolphus and Gavin Kennedy will be back on staff should be given the chance to compete for a starting role. Add to the mix incoming freshmen recruits Jake Vargas, James Wambold and Christian Rodriguez and the bullpen could be crowded with young players seeking innings. Another incoming addition includes graduate transfer Ryan Hare from UNLV. Hare was the Friday night starter for the Rebels in 2020.

Another year under pitching coach Dan Ricabal and the Titans pitching could return to the days when wins came without tons of runs support.