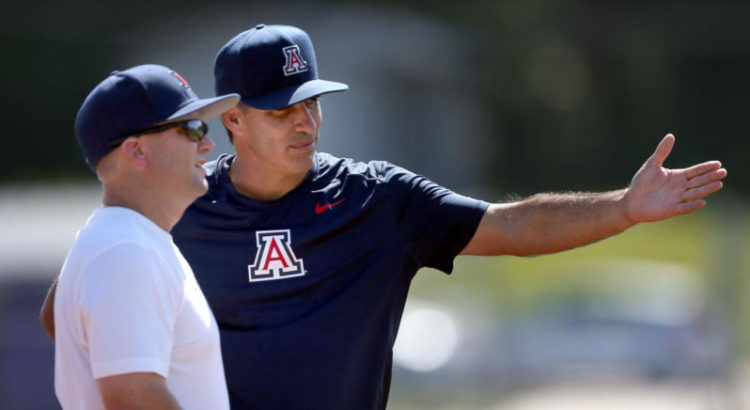 It appears that Titan Baseball skipper Rick Vanderhook is putting the band back together. Although the announcement has not been made official, Sergio Brown is expected to return to his roots and will be named the Associate Head Coach of Cal State Fullerton Baseball. This will be Brown’s third stint as a coach within the Titan Baseball program and fourth overall after playing as a middle infielder for the 1995 National Championship Titans.

Kendall Rogers of D1Baseball originally broke this news on Twitter:

For the past four years, Brown has been an assistant coach for the University of Arizona serving as the recruiting coordinator, coaching first base and working with the infielders. Brown’s hire comes on the heels of the announcement that long time assistant coach Chad Baum will leave the program to take the head coaching position at Fullerton College. Volunteer assistant Neil Walton has left the Titan Baseball program to join Dave Serrano at Cal State Northridge. Walton coached first base and worked with infielders primarily and Brown’s hire and experience will fill that role vacated by Walton.

Make no mistake. Brown’s hire was motivated to bolster the Titan Baseball recruiting efforts. Brown’s recruiting ability is unmatched and he will take on the role of recruiting coordinator once he arrives on Cal State Fullerton’s campus. Arizona recruiting classes while Brown has been in Tucson have received high praise from pundits. The most recent recruiting class at Arizona ranked No. 3 in the country by Collegiate Baseball, No. 11 by D1Baseball, No. 11 by Perfect Game and No. 13 by Baseball America. Two freshmen Arizona Wildcats (Austin Wells and Dayton Dooney) were named to the Baseball America 2019 College Baseball Freshman All-American Teams.

Since his time as a player on the 1995 Titan Baseball team, the furthest east he has worked was most recently at University of Arizona. Brown’s ties to the west coast are strong with two different coaching stints at Cal State Fullerton and stops at UC Irvine, UC San Diego and Cal State Northridge.

Before going to Arizona, Brown served as an assistant coach at Cal State Northridge during the 2013 season. He helped coach the Matadors to 31 wins and 15 conference victories. Prior to Cal State Northridge, Brown served as an assistant coach and recruiting coordinator at UC San Diego during the 2012 campaign.

Brown was at UC Irvine from 2004-2007 made the NCAA Tournament twice, including a third-place finish at the 2007 College World Series. His 2007 recruiting class was ranked 14th nationally.

Neil Walton’s departure leaves the volunteer coaching position wide open and indicators of who will fill that role is anyone’s guess. Many are speculating that pitching coach Steve Rousey will retire from coaching after spending years within the California State University and California Community College system. Both systems use the California Public Employees’ Retirement System (CalPERS) and Rousey has been a part of it for quite some time.

The fiscal year for the Cal State system starts July 1 and a replacement for Rousey should come once the new fiscal year starts. Speculation is the new pitching coach will either be Jason Dietrich or Dan Ricabal. Dietrich was lured away from Fullerton to take the pitching coach job at Oregon on George Horton’s staff. Ricabal, a former Titan pitcher himself, most recently worked as the pitching coach for Long Beach State. Eric Valenzuela from Saint Mary’s recently accepted the Long Beach job and brought his entire staff with him leaving Ricabal looking for a new gig.

One thought to “Who is Sergio Brown?”