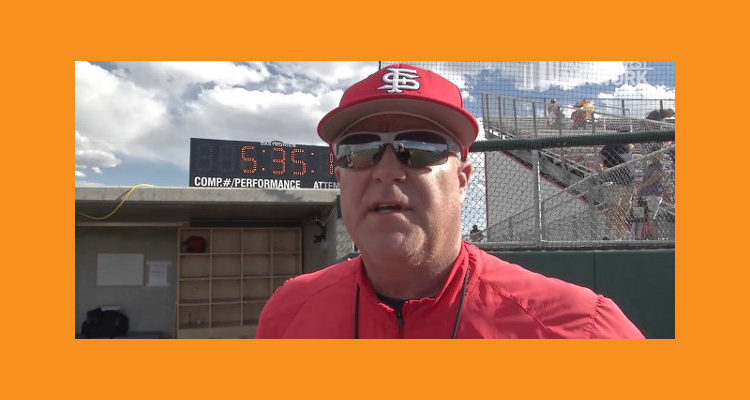 In both the Linkedin page and twitter profile, Rousey lists his job title as Baseball Coach at California State University, Fullerton and CSF Baseball-Titan Coach respectively. Even though Cal State Fullerton may be a little slow on the uptake, we here at Cal State Omaha using our journalism degree we earned from CSUF, are going to call it and say Steve Rousey is the new pitching coach for the 2017 season.

But who is Steve Rousey?

First, a little credit needs to be given to Kendall Rogers of D1Baseball.com that started the Steve Rousey hiring rumor mill on Twitter. On July 13, 2017, @KendallRogersD1 tweeted:

.@BaseballTitans pitching coach Blake Hawksworth has left the program to pursue other opportunities in baseball. Spent one year w/ #Titans.

Now that it is “official” (per the internet), let’s delve into exactly who is Steve Rousey.

Steve Rousey’s Cal State Fullerton roots run deep. Most notably, Rousey was a top pitcher at Cal State Fullerton in the 1980’s. In three seasons playing for the Titans and NCAA all-time winningest head coach Augie Garrido, he compiled a 15-5 record with 120 strikeouts. Rousey played in the College World Series twice and helped the Titans win their second National Championship by compiling an 8-3 record with a 3.47 earned run average in 1984. A fourth-round pick by the Seattle Mariners in 1984 after his junior season, Rousey spent five years playing professionally in the Seattle Mariners and Montreal Expos organizations.

After his professional baseball career came to a close, Rousey turned towards coaching baseball at Crescenta Valley High School before coming back to Division 1 college baseball. 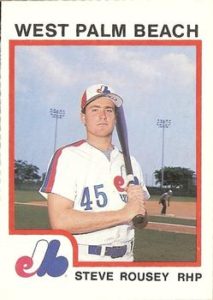 Sticking with his Titan roots, Rousey began coaching as an assistant for Coach Dave Snow at Long Beach State from 1993-95. In his three years, the 49ers established themselves as a national power by capturing two of three Big West titles, making three regional appearances and a trip to the College World Series semifinals. During his time at Long Beach, LBSU had three pitchers earn All-American honors and and one named the 1993 National Pitcher of the Year (Daniel Choi). Four more MLB players, including three pitchers were a part of those Long Beach teams.

After coaching three years at Long Beach, Rousey accepted the head coach position at Los Angeles City College. Rousey compiled a 24-18 record in his first year at LACC after taking over a team that had no players after being cut and then reinstated. His teams compiled 50 wins over his last two seasons (1999 & 2000) while 56 of Rousey’s players went on to play at the university or professional level.

Rousey returned to his pitching roots and accepted the pitching coach job at Cal State Northridge in 2001. While the pitching coach at Northridge for the 2001 and 2002 seasons, Rousey helped lead Northridge to a two-year record of 75-39 and the Matadors claimed the Big West title in 2002. Working primarily with the pitchers, Rousey saw his staff finish the 2002 season with 41 wins, 13 saves and 478 strikeouts. In 2002, Cal State Northridge won the Big West Conference title in only their second year in the conference and Rousey developed three future MLB Pitchers that season in Kameron Loe, Bill Murphy, and Leo Rosales. 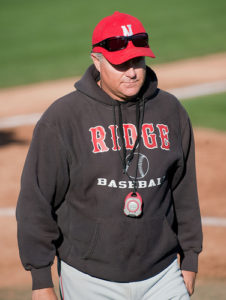 In 2003, Rousey was elevated to head coach of the CSUN Matadors compiling a 169-278-1 record. In 2001, Rousey joined the Fresno State coaching staff, once again returning to pitching coach duties where he made an immediate impact. In 2011 and 2012, Fresno State made the NCAA Regionals and in those two seasons, Bulldog pitchers dominated the WAC. Eight pitchers were drafted and postrespective ERAs of 2.91 and 3.88 in those two seasons. The Bulldogs also amassed 909 strikeouts while earning a pair of conference championship rings.

Although success and teaching on the mound is Rousey’s forte, recruiting and overall player development is an intangible that Rousey will bring to the Titans immediately. Renowned as a tremendous recruiter, Rousey was responsible for recruiting most notably Aaron Judge to Fresno State. When Jason Dietrich departed to join George Horton at the University of Oregon, many Titan fans feared the recruiting of top tier players would diminish. With Rousey’s deep roots within the talent rich State of California, recruiting and the ability to attract top players to Fullerton does not look to be a concern.

All-American Colton Eastman along with top relievers Blake Workman and Brett Conine will take the hill for their third season and will have their third pitching coach in as many years. All three are veteran pitchers that can handle the change and will be just fine. Rousey’s track record of arriving to lead a pitching staff and produce immediate success has to be encouraging to Titan fans. With a pitching staff that is projected to dominate the Big West again, the addition of Rousey can only further cement those high expectations.

Cal State Omaha encourages you to join us in welcoming Steve Rousey back to Cal State Fullerton.