Unlike other neutral sites that host championship games like the Super Bowl, the NCAA Final Four or the College Football Playoffs, the NCAA College World Series has been played in Omaha, Nebraska since 1950.

But why? Why Omaha? Why not have the College World Series (CWS) played in other cities and other venues? The answer is not as simple and cut and dried as you may think.

To answer that question, we need to go all the way back in time to when the CWS first started. The first College World Series was played in Kalamazoo, Michigan in 1947. Kalamazoo would host it again in 1948. The tournament was then moved the following year in 1949 to Wichita, Kansas. The College World Series then moved to Omaha in 1950 and has been a fixture there ever since.

But why has the College world Series stayed in Omaha since 1950 and hasn’t moved yet? There are a number of theories but none are concrete as fact.

One reason may be that the total attendance for the 1950 CWS first held in Omaha was 17,805. The boost in attendance (attendance figures for years 1947 – 1949 unavailable) may have coincided with the CWS field expanding from four teams in the championship series to eight teams in a double elimination format. Eight teams instead of four doubled the number of potential fans coming to the CWS and Omaha may have been a serendipitous beneficiary of the increased attendance. You would figure that the NCAA looked at the increased attendance numbers and chose to have Omaha host the following year in 1951.

Once the College World series landed in Omaha, there were a handful of local leaders who embraced the event and ensured it would never leave. The strong local and influential businessmen credited with the CWS success in Omaha included Morris Jacobs and Byron Reed of the Bozell & Jacobs firm, Ed Pettis of the old Brandies store and Johnny Rosenblatt, the Mayor of Omaha and a huge huge baseball fan himself.

The aforementioned business men and community leaders built and nurtured a huge commitment from volunteers in the community, but also huge corporate support from the big money folks in Omaha in order to convince the NCAA to keep Omaha the home of the CWS. 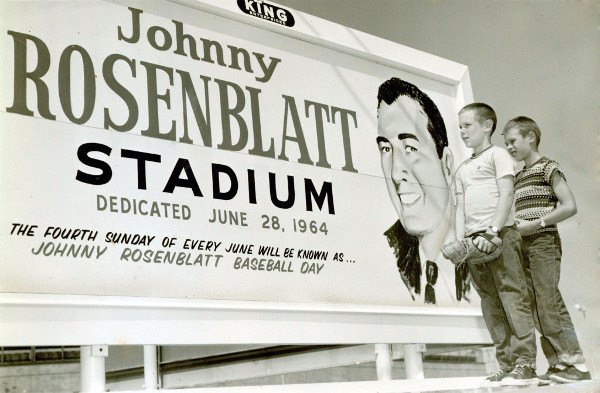 Since the first College World series in Omaha in 1950, only two stadiums have played host to the tournament. The first stadium, Johnny Rosenblatt Stadium, was originally known as Omaha Municipal Stadium from 1947 – 1964. In 1964, the stadium was renamed to honor former Omaha mayor Johnny Rosenblatt, who was instrumental in bringing minor league professional baseball as well as the College World Series to Omaha.

Omaha Municipal Stadium was built in 1947, ready to host the single-A Omaha Cardinals for the 1948 season. The St. Louis Cardinals farm team was the first professional baseball team to call Omaha its home. Over the next few years Rosenblatt hosted several different teams. In 1969, the Kansas City Royals moved their triple-A franchise (Omaha Royals) to Omaha, which played at Rosenblatt through the 2010 season. The Omaha Royals played in Johnny Rosenblatt Stadium, home to the College World Series for over 60 years. The Royals moved to their new home, Werner Park in Sarpy County, and changed their name from Royals to Storm Chasers in 2011.

The second venue to host the College World Series is TD Amertitrade park. Opened in 2011, the venue was constructed after the NCAA signed an agreement to keep the CWS in Omaha until at least 2035 if the ballpark was built. The failing condition of Rosenblatt Stadium prompted the move to build a new stadium, this time in the downtown area of Omaha. On April 30, 2009, the city and the NCAA agreed on a memorandum of understanding, outlining a preliminary agreement to keep the College World Series in Omaha for another 25 years through 2035. The agreement stipulated that the series be moved to the new downtown stadium by 2011.

The College World Series has experienced exponential growth since moving to Omaha. The upward trajectory for the event looks to be exponential with the opening of the new ballpark and increasing television exposure. In 2015, the event total attendance record of 353,378 in 17 games broke the previous mark of 347,740 set in 2014. Total attendance has increased every year since the move from Rosenblatt Stadium, though average game attendance has fluctuated mainly based on the popularity and proximity of teams playing in individual games.

For the near and extended future, at least until 2035, the College World Series will continue to call Omaha home. It’s a safe bet that before the 2035 date approaches, the City of Omaha and the NCAA will extend that contract. The Omaha community has wrapped its arms around the College World Series, it’s vagabond fans and college baseball culture.

With nearly 70 years of history in the books for Omaha and the year 2035 a long way off in the future, it looks as though college baseball players all over the country will mark their June calendars with “Omaha” with thoughts of a pitcher’s mound dog pile dancing in their heads.